Needless to say, it has been quite some time since I had a smile on my face while playing a mech game.  I still recall all those nights online playing “Mech Assault” on the original Xbox with the gang.  We would have a blast as we would march our mechs onto the battlefield and hammer away at each other.  Not to mention, my subwoofer would get a workout with all those thunderous sounds of the mechs firing missile attack after missile attack resulting in explosion after explosion.  Since then the mech gaming genre has been on a steady decline.  Well, at least it seems that way for me as I have never been able to recapture that same feeling I had so many years ago.  Along comes Armored Core V at a time when the mech game genre could use a jolt of energy.  Does Armored Core V put mech games back on the map and smile on my face?  Unfortunately for me, not really; however, fans of the previous Armored Core games will still find plenty redeeming qualities in this latest game in the franchise.

For those of you who nothing about the Armored Core series, it is a mech-based game developed by From Software which plays out as a third-person shooter where you pilot large mechs called Armored Cores, or AC for short.  At its heart Armored Core V is an MMO.  Yes, there is a single player element to the game, but it is essentially an MMO game where you and up to 20 other online gamers team up do battle online, attacking and defending various territories.  Granted there is much more to it than this, but I thought I would give you a quick description of Armored Core V in a nutshell.  I should warn you though, if you do not have an Xbox Live account then I strongly recommend you take a pass.  Sure it has a single player element as I mentioned, and it is enjoyable to tinker around with all the countless ways you can customize your mech (more on this below), yet at the end of the day the online game is what will keep people coming back for weeks to months on end.

When you first jump into the game, you are asked to sign into Xbox Live and then scroll through a rather lofty disclaimer agreement.  Once you have agreed to all the legal mumbo jumbo you are ready to learn the basics of controlling your mech.  Just before you run through the game’s tutorial, you are greeted with a slick little video montage of various mechs fighting and other futuristic machinery doing battle.  This little segment certainly has a high production value and it is difficult to take your eyes off the screen.  I was very impressed as it set the perfect mood for the game.  I felt like I was jumping into a desperate futuristic Terminator-like world where robots dominate and humans are nowhere to be found.  In any event, I was impressed with the opening sequence. 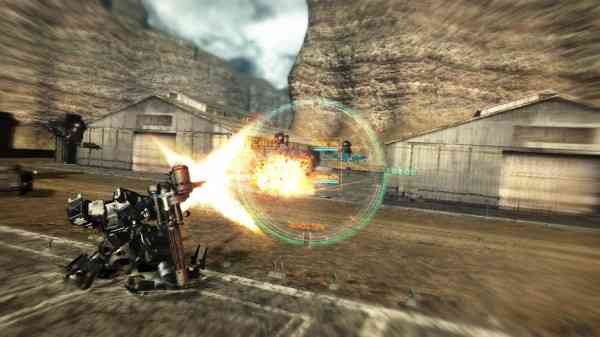 After the sweet little opener wraps up, and you have entered all your player information, the prologue mission begins.  Here you learn the games basic moves and techniques.  As you play along you are asked to complete a variety of objectives as you follow a somewhat linear path.   The game does a nice job of introducing you to the various controls.  Trigger and bumper buttons are used for firing your weapons and giving your mech a boost.  The mechs can also jump by simply hitting the A button and moving around is controlled by the analog sticks.  Otherwise, that is about it as far as the controls are concerned, and all in all they are straightforward and easy to pick-up.  Anyone who has ever played a mech game will easily be able to pick up the controls, but being able to make an impact in the online realm is a completely different story.

After you have completed the prologue the game switches gears and launches you into a menu screen where you will can join an existing team or create your own.  From here everything you do in the game contributes to the team’s overall level, standing, and earns your team points that are subsequently spent on tackling new territories.  So even if you decide to venture off on your own and take on a mission solo, you still contribute to your teams overall standing, and of course earn those valuable points.  Unfortunately, the solo missions are not nearly as enjoyable as playing the multiplayer missions.  On your own, the game is somewhat repetitive and tiresome as you battle one large mech after another.  To make matters worse, if you do not have the correct weapon load-out then all your work will be for nothing.  It is essential to have some beefy firepower before you jump into a game in order for you to take those big suckers down.   This is accomplished with the games customizable options. 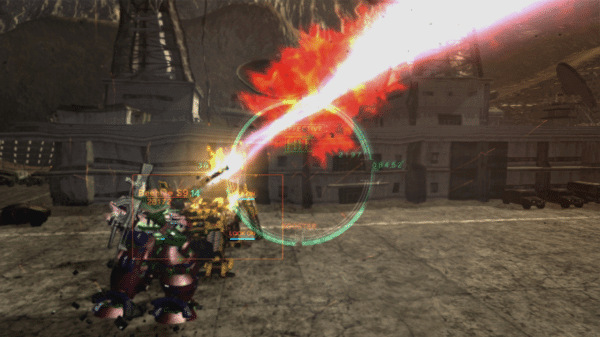 What makes Armored Core V stand out from other mech games is all the customizable options.  The game truly has an endless amount of things for you to help customize your mech.  The amount of parts you can chose from is endless and almost overwhelming.  You can equip nearly every limb with some kind of weaponry and the results are very impressive.  Weaponry is not the only thing you can tinker though as you can change emblems, the colour of your mech, and decals.  You can also equip your mech with defensive shields, boosters, and trackers that help you locate enemy mechs.  I could literally go on for pages with the amount of customizable options available in this game.

All in all, Armored Core has over eighty separate missions for you to take on.  Online, in Conquest mode, you can invade or defend a territory with a team of up to 5 players.  Sorry folks, you cannot do battle online with all 20 members of you team; however, the 5-on-5 game is very solid.  You are not restricted to playing with only your own teammates either.  You can join any team much like you can in any online shooter.  Unlike many other mech games, the pace is very quick and much of that has to do with the games boost system.  Despite the fast pace, it is not a game of run and gun as there is still a great deal of strategy involved.  At first I tended to jump smack dab in the middle of a fight and try to battle away, which would only lead to my quick demise.  Eventually I learned to use recon darts and other strategies to locate the enemy and take them down in a much more strategic manner.  Playing with a balanced team goes a long way as well.  Having a team full of mechs equipped with heavy weaponry may leave them vulnerable to mechs equipped with long range weaponry.  So to that end, I emphasize the word “team” and the need to have a good compliment of different types of mechs. 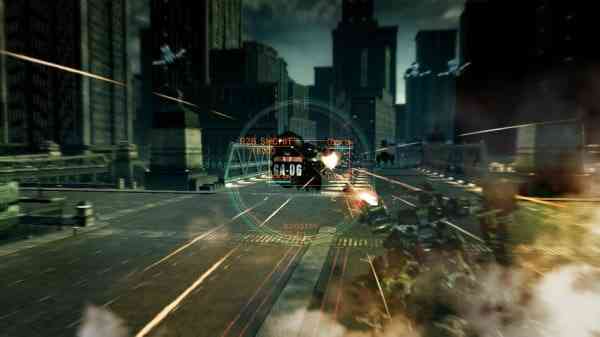 Unfortunately, learning to recognize what makes a team successful in online combat and just simply learning how to effectively do battle in the online world takes a lot of time, patience and practice.  While the game does a wonderful job at teaching you the game’s basic controls, it does little to help you succeed.  Those new to the franchise will indeed struggle unless they have done a lot of research and scour through forums in order to see what custom load outs work the best.  So without question this is a game you need to set aside some time for and exercise a great deal of persistence if you plan on having a successful Armored Core V experience.

Visually the game is somewhat of a mixed bag.  On one hand, the game’s opening montage is slick.  The presentation value is high and it is almost a big screen Hollywood blockbuster trailer.  Additionally, the level of detail that goes into the in-game mechs is impressive.  Not one detail was overlooked and the result is stunning.  On the other had the level design can appear somewhat simplistic lacking the necessary detail in order for this to be considered a truly stunning looking game.  The game’s environments can almost appear a tad murky at time.  I just felt them to be a tad bland and even drab.  In terms of the sound, Armored Core V is about what I expected.  All the crashing, bashing and heavy mech sounds we have come to love are all present.  The result is a game that delivers in the sound effects department.  The music is decent but could have used some more heavy Chemical Brother-like tunes.  All in all, I have no real concerns with the games audio and video presentation as it is far from bad.

Overall, Armored Core V is game geared for those fans of the franchise looking for a deep modern day MMO-mech experience.  Granted, it is a game that is geared towards the more hardcore mech gamer who is looking to hunker down online with a team for months on end.  Those new to the franchise may be a little overwhelmed by all the customizable options and the online game, so keep this in mind.  This being said, Armored Core V is a good game and one that fans of mech games may want to give a spin.