I’ve been a huge fan of developer thatgamecompany’s games since I first played flOw and Flower.  While they were both good, I found the latter more exciting and wonderful.  I’ve been eagerly tracking Journey’s progress since its announcement at E3 2010, and I’m pleased to say that the game has exceeded even my expectations.  Like a good critic, I tried to find flaws in the game, but it seems this game has been polished to perfection.

The first moments in Journey begin with a gentle, subtle guide to the Sixaxis camera controls, and you are then free to take control of your nameless character; a featureless, mute, and decidedly gender-neutral cloth person.  You’ll climb your first hill, then slide down and be shortly introduced to the game’s flight mechanic.  Beyond this, the game lets you discover for yourself how to play.  It’s impossible to describe individual events in Journey without spoiling anyone’s first experience of the game, but suffice to say, it’s always clear that your final goal is the glowing mountain on the horizon, and you will travel both high and low along the way to get there.  The popular saying, “It’s the journey, not the destination” applies strongly to this game.

In terms of core mechanics, Journey’s are deceptively simple.  The analog stick controls movement and the X button allows you to jump into the air for a moment of brief flight.  While the options are fairly limited, it is through execution that Journey shows off its perfect movement mechanics.  Movement is very sensitive to the controls, and the flawless animation ensures you always feel the incline of the land as well as the texture of the sand or stone your character walks on.  When walking up hills in the game your character climbs the steep slopes with visible effort, and there’s a real feeling of weight and burden to the ascent.  On the other hand, descending a slope lends itself to feeling of rush and excitement as your character slides downhill with speed and grace, much like a skier going down a groomed slope. 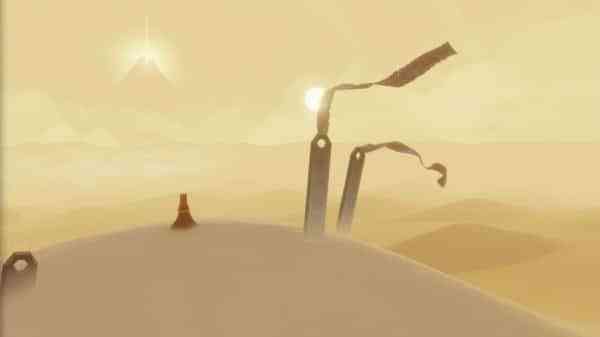 The smoothness of climbing and sliding is completed with the option to defy gravity and take flight, by using the X button.   You will collect glyphs, many of which are hidden, and as you do so your scarf will grow allowing for longer flight times.  Flight is exactly how it sounds, but as with movement the animation makes the action of flying feel more real than other games.  As you hold X your scarf’s energy will deplete and your character will unfurl their robe and propel themselves into the air with the grace of birds.  This elegance, which is communicated through animation, makes flight feel liberating and fun, just as it should.

The core “gimmick” in Journey, which is probably its most defining and unique feature, is its multiplayer.  It is not multiplayer in the traditional sense of the word though; Journey’s multiplayer is defined by what it is not.  Multiplayer here does not include a server system, lobbies, chat, or even menus.  The only option you have direct input into is to actually press a button to log into the network.  Journey decides when you will meet others, as you have no say in when an encounter may take place.

It would be a knee-jerk reaction to condemn Journey’s multiplayer were it a traditional game, but Journey’s multiplayer meshes so seamlessly with the single-player experience that less-informed players may think they are encountering a non-player-character at first glance, and encountering a player unexpectedly for the first time is an utterly magical moment that can’t be described.  This is where the circle button plays an important role. 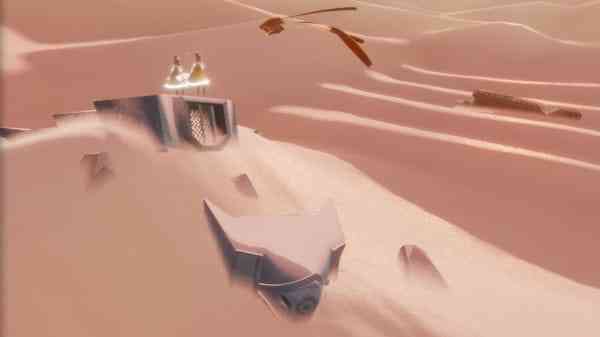 Under ordinary circumstances, the call or song function that the circle button is assigned simply allows you to breathe life into the cloth of the gameworld; however, when playing with another player the call becomes the most important form of communication, as well as a helpful tool.  Not only does the call refill a portion of a partner’s scarf, allowing for more frequent flights, but as you spend time with your partner you will start to work out different sound codes for different situations.  Perhaps to catch your attention your partner will opt to let out a series of short, small chirps.  Maybe you will opt to let one longer note out to get their eye.  The simplicity of this system sounds limited on paper, but in practice it is dynamic and versatile, and it is always engaging to see how different players will adapt in order to communicate.

While taking a partner along is an experience like no other, it’s important to take care to stay close to them because it is not difficult to lose them if you venture too far away.  While one might imagine that a simplified communication system offers no opportunities for connection, since the complications and details of conventional human communication have been stripped away, all that’s left is the congruence of both player’s characters.  You’ll form bonds because your clothing, abilities, and goals are mostly the same.  As you make your way toward the mountain in the horizon, you will begin to realize that the game is a parable for human life.  The meaning here is too personal to be explicitly read into, but there is little doubt that anyone can find significance from Journey.  The parallels for human relationships that can be read from multiplayer experiences are limitless.

If one looks hard enough, they could almost find some criticisms in Journey.  The optional Sixaxis camera controls aren’t as accurate as the second analog stick, and the game’s length is short, at only 2-3 hours.  Still, there are valid reasons for these “issues”.  The motion-controlled camera is designed for non-gamers to be able to control the camera, and the game’s length is designed for a one-session playthrough. 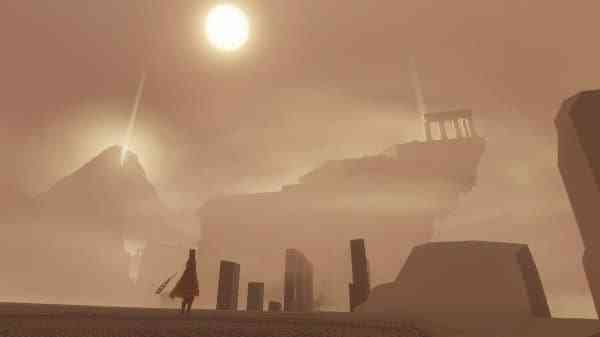 Aesthetically, the game is incomparable.  The visuals cohesively share a surreal, lovingly coloured feel that show a clear and focused artistic vision.  The game also holds up extremely well on a technical level.  Using Sony’s PhyreEngine game engine, sand ripples according to your character’s pressure and flags lash erratically with the wind, all the while holding a steady framerate at a resolution of 720p.

In regards to the audio, just as with Flower and flOw, there are plenty of sound effects, some natural, and some more abstract.  Loud bass booms highlight the opening of stone doors, and the adorable chirps and hums of certain cloth fish-like creatures never fail to bring a smile.  It is rarely a loud game, but it’s a game better experienced on a decent surround sound system.  Of course, the highlight of the sound design is the wondrous soundtrack, composed by Austin Wintory (flOw’s music composer).  The soundtrack was developed continuously during Journey’s three-year development cycle, and level of refinement is apparent.  Using a blend of orchestral arrangements, cello, viola, synthesisers, and more, the soundtrack is perfectly timed to in-game events and compliments the mood perfectly in every moment.

Journey is a game about life.  While so many games strive to be true to one specific concept, Journey represents the arc that encompasses all emotions.  It tries to be all things to all people, and it succeeds, because you take your life experiences into the game.  Regardless of age, race, culture, or gender, any open-minded player can find something amazing here.  Don’t let Journey’s short length fool you either.  This is a dense, rich game where every second is precious.  There is no filler.  Even at three hours, it’s impossible to take everything in during your first time playing it, and hidden collectibles and curios offer extra encouragement to come back to this world.  Journey is a beautiful game, inside and out, and it pushes the boundaries of what games can do.