Sound in games is an absolutely crucial component of immersion. A killer soundtrack and palpitation inducing sound effects go a long way to making a game fun, and there’s really no better way to experience sound than on a mind-blowing set of ear cans. For the past month I’ve had the Steelseries Siberia X300’s strapped to my noggin, and they offer an excellent soundstage for a relatively bargain price.

Steelseries has long been a premiere peripheral manufacturer in the PC space, but is hitting the console market this Fall with the X and P series – I bet you can guess what those letters stand for. The X300 is a mid tier headset that runs around $129 on Amazon, while it’s sister the P300 goes for around $99. Physicially, the headsets are identical (and can be used on any platform with a mini plug), but the X series includes an adapter to account for the Xbox One’s controller expansion nonsense. Yes, the P and X300 headsets are closely related to the Siberia V3 PC cans, and that’s a good thing.

The X300 is LIGHT. Super light even. While I was initially concerned about durability, the plastics seem flexible and strong, and a good amount of twisting didn’t cause any issues. The connector cable is hard wired to the left ear cup and has a rubbery coating that tangles with everything. I mean really. Everything. I would have appreciated a detachable fabric cable, but you can’t win them all now can you? A retractable and flexible microphone also resides in the left ear, and provides reasonably good sound quality – listeners consistently said my voice was clearer over the X300 than standard console gear. Nice and soft ear cups are covered in a faux leather material, while a lightweight frame and very lightly padded suspension system round out the physical features.

On the head, it’s easy to forget you’re wearing the X300. They’re really that light. The suspension adjusts comfortably to the shape of your head, but does put noticeable pressure on your noggin during extended sessions. That’s fortunately the only point of discomfort I noticed during my time with the headset. The ear cups wrap nicely over the ears, and manage to stay only moderately sweaty despite the leathery covering. A note for people with, uh, giant domes (like me): the width of the headset and range of suspension motion on the X300 means that the ear cups don’t seal evenly over the ears if your head is wide. Sound quality is affected slightly by this situation, but I quickly adapted to it. Other people I had try on the set – you know, people without Neanderthal skulls – reported a much tighter seal.

“The sound quality is baffling considering the overall weight.”

So how do they sound? In a word – great! The sound quality produced from the headset is baffling considering the overall weight of the product. In game situations, the frequencies game designers favour – the low ones – are strong and sharp. Explosions and gunfire hit with surprising force, all while avoiding becoming boomy or unbalanced. Yes, mids and highs also come through loud and clear, and I found myself noticing little audio bits I hadn’t noticed before across the board. In short, for games, the Siberia X300 headset sounds fantastic.

What I wouldn’t do with these headphones, is listen to music. Perhaps it’s that the frequencies emphasized in games are balanced out on this headset, but the midrange is very prominent in music situations. Even substantial EQ work didn’t sort out the problem entirely, but did make a marked difference. 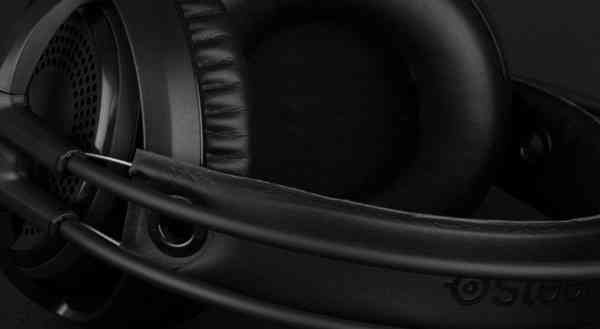 But, back to the important part – games. Stereo imaging is excellent, and the set is able to give a sense of forward vs. backward directionality despite being stereo only. Being a sealed headset, one feature that would make a great deal of sense is microphone monitoring. In short, the set should pipe your voice back into the earphones, because not being able to hear yourself is always annoying.

If you’re looking for a basic headset that is comfortable, sounds great in games, and doesn’t need a lot of flashy features to get the job done, give the Siberia P and/or X300 series a try. They provide a quality experience for a reasonable price, and that fact bodes very well for Steelseries’ expansion into the console market.