Concrete Jungle is a new game from indie studio ColePowered Games, and their first title available on Steam. It combines the strategic aspects of a city builder like SimCity with the turn-based gameplay of a card game, making for a unique and challenging experience that’s addicting as all heck!

I wouldn’t do it justice if I didn’t begin with one of Concrete Jungle‘s strongest points; its presentation. The characters are charming, each being a caricature of stereotypical political candidates, exchanging humorous, and fully voiced, dialogue between levels. The levels themselves all look like detailed model of cities, complete with a tilt-shift effect. And, last but not least, the licensed soundtrack fits quite nicely with the overall feel of the game. (Don’t worry, streamers, there’s a “stream-safe soundtrack” option for you as well!)

The goal of the game is to clear columns of land while achieving minimum score requirements for each column via strategic use of your “building” cards. While this may seem simple, you’re hindered by pre-existing buildings, and, in versus matches, an AI player actively working against you. Each level of the campaign has the same core gameplay but switches things up enough that you’ll need to develop new strategies to succeed. The one gripe I have with this (and it is a small one), is that the difficulty curve feels a bit uneven. I breezed through many “extreme” levels on my first try, while struggling with certain “hard” levels. Though, this may just be due to my own incompetence but no one ever likes admitting that!

“It combines the strategic aspects of a city builder like SimCity with the turn-based gameplay of a card game, making for a unique and challenging experience that’s addicting as all heck!”

As you progress through the campaign, you unlock more characters to play as, each with their own unique skill tree to help you out. Usually, this involves beating said character in a versus match. The AI is very well done, with later opponents being particularly ruthless towards you… curse you, military lady!

Speaking of versus mode, while the local multiplayer is nice, I would be interested to see the developers add online functionality.  It’d give the game some much needed replayability that doesn’t just involve trying to beat your own high scores. That being said, you could probably use screen sharing software or a streaming service to achieve the same result, if you really wanted to. 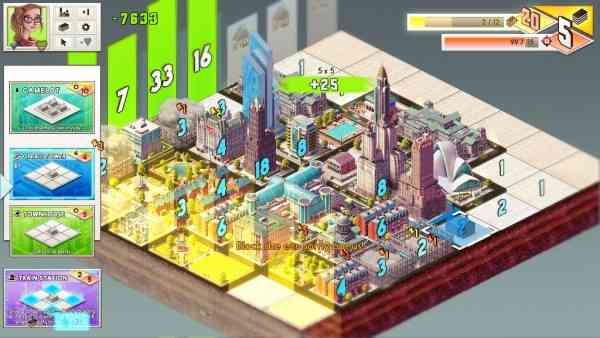 On the whole, Concrete Jungle shows the developers mobile game roots in all the right ways. Each level is the perfect length for your average coffee break, with addicting gameplay that’ll keep you coming back to three-star every level. The price point is a little high at $18 CAD as of this writing, but if you’re into this sort of thing, or can pick it up on sale, I definitely recommend it.

• High price point for an indie title
• No online multiplayer


Frozenheim Review – We Built This City on Rocks and Soil