Steel Rats Review – Plenty of Pests to Be Found

In early October, I played and wrote about a snippet of Tate Multimedia’s game Steel Rats. My initial impression was hopeful. There were definitely issues, but I had fun in my brief time with the game. To summarize the issues I had with the game, its combat tended to slow to a crawl in a game about blazing through on motorcycles, and the wheel-saw had some problems. Flash forward a month, and those issues are almost completely gone. The combat capabilities are expanded for better on-the-move assaults, and blazing through most obstacles doesn’t slow you down like it did before. Seeing these fixes while replaying through the first area made me extremely hopeful, and I settled in for an exciting motorcycle adventure. And that’s what I got—kind of.

While it’s true that the problems I had with Steel Rats when I first played it have largely been resolved, having access only to the first area (roughly a quarter of the full game) means that there was a lot of game left unobserved and uncriticized. This isn’t always a problem; demos can be an excellent way to tease and excite players. Unfortunately, in this case, the withheld content contained numerous problems of its own. Immediately after leaving the introductory area, the difference in polish applied to the first few levels and the rest of the game becomes glaringly apparent. The most significant and pervasive issue is the game’s level design.

Games like Steel Rats live and die on two things: game feel and level design. Because the level design in the introductory area is solid, my preview of the game addressed the game feel almost exclusively. Since those issues have largely been resolved (much to the game’s benefit), you can guess where my attention is going to fall here. The level design is just not good in a lot of the game. Steel Rats isn’t designed to be a platformer, so having areas where precise jumps and careful (slow) maneuvering are necessary to avoid bottomless pits plays problematically. Now that I think about it, falling into pits was probably my least favorite part of this game. There are pits that you have to carefully avoid, pits that appear far too suddenly to allow for any proper reaction, and pits that you weren’t sure were pits because sometimes the game requires that you take little leaps of faith. On a related note, I seriously underestimated how often I would die because I fell just a little too far. In a game about alien robots trying to destroy humanity, Earth’s own gravity was probably the most frequent instrument of my demise. Ironic. As easy as it is to fall off of the innumerable platforms in the game, I would have thought that a suitably cruel punishment for falling would have been as simple as climbing back up. Evidently not.

The bizarre thing is that not all of the level design is on the same…level (get it?). There are some really fun parts here and there where you have to pull off a sweet combination of moves to get to a necessary area, and doing that feels awesome. Unfortunately, those spots are few and far between. Why? I want more of that! Make me feel rewarded for using your system effectively! Your game should make me feel like a badass! Let me feel like a badass! Stop making me afraid I’m going to fall into a pit! Ahem…anyway.

Mazes are famous for their ability to make people feel like they’re moving through an area extremely quickly. What’s that, they do the opposite? Then why are the layouts of Steel Rats’ levels so maze-like? I imagine it has to do with not wanting levels to feel excruciatingly linear. If that’s the case, though, they’re missing the point. These levels should be linear, and that should be okay. Linearity does not necessitate that a level be boring. It simply necessitates that whatever populates that level be interesting. Unfortunately, running into a dead-end and having to turn around are not activities I would consider interesting.

What is interesting, though, is when the game decides to throw its rules out the window and let chaos ensue in whatever way the code likes. Bugs are everywhere in this game. It’s a big problem. Bugs are so rampant, in fact, that I would say that this game simply isn’t ready for full release. That may sound dramatic, but let me give you an idea of how prevalent glitches and bugs are in this game. They occurred so often that I wasn’t particularly surprised to find that one of my characters had inexplicably become invulnerable during the final boss fight. It’s a good thing, too. That final boss is a nightmare. Other bugs include menus becoming unnavigable with the controller (problematic for a game that highly recommends that you play with one), and sometimes just becoming part of the wall and shaking violently until you restart the level.

When Steel Rats works, it works really well. Levels where you’re gunning it through well-charted courses, flipping and spinning through the air, burning through obstacles like a hot knife through butter—these are an absolute joy to play. Somewhere in Steel Rats is a game I would gladly play and recommend. Unfortunately, the pieces just didn’t fall into place often enough for me to call the full game good. The game overall is a very stylistic “okay.”

***A PC Code was provided by the publisher*** 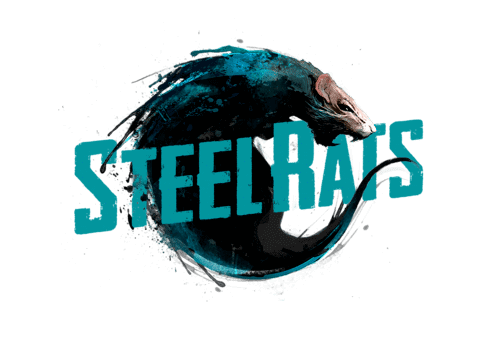