StarCraft Remastered Is Just as Good as You Remember It

Originally released back in 1998, StarCraft has grown to a global phenomenon, rising from an innovative real-time strategy and growing into an entire industry. With dedicated television channels, tournaments with thousands of dollars in prizes, and professional StarCraft players being treated like celebrities, the game has proven to be so much more than a way to pass the time. Since the release of StarCraft 2 in 2010, the series has been revitalized and reimagined with a gorgeous cinematic story, all new units and abilities, and expansion packs to build it into a sequel worthy of the original masterpiece. But does the classic game still hold the same power as it did all those years ago?

StarCraft Remastered is exactly what you expect it to be, and that’s a good thing. Blizzard has not made any changes to stats or gameplay from the original because there was no reason to; it is still a solid gaming experience where all of your favorite strategies apply. What has been changed are all the aesthetics necessary to bring this game up to modern standards. StarCraft now runs with a glorious 4K capability in a widescreen format that utilizes today’s monitors to their fullest potential. Units, terrain, and the HUD are now met with crisp lines, fine definition, and greater detail that brings them to life.

“Each race has advantages and disadvantages to each other, making it an incredibly complex game of chess where life and death hangs in the balance.”

I am not the kind of player who can pull off 1000 APM, preferring instead to watch my army in action and micro manage their assault while observing the destruction of my enemy. StarCraft Remastered’s finer details let me see exactly what my units are doing in combat as opposed to having a pixelized spray of bullets/energy/spines and then a blood stain on the battlefield. In fact, Blizzard added a minor zoom function to get in close. It doesn’t exactly do much for gameplay, but it’s a nice addition for seeing the work that went into these tiny warriors almost 20 years ago. It feels more like something that was added as an after-thought, but it’s still neat.

In keeping with the theme of the graphical overhaul, gone are the unit portraits of characters who reflected the days of “new” 3D technology. Instead, almost every unit in the game has a revamped portrait that – again – is crisp, clean, and just a little something new to show you it’s been upgraded. 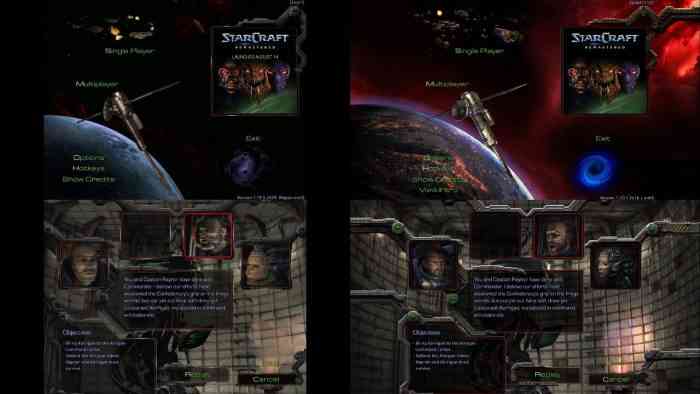 If you have played StarCraft before than the Remastered version will be a welcome upgrade to an already stellar experience. For those who don’t know the game, players select from either the Terran, Protoss, or Zerg races and engage in a war to collect resources and build an army to destroy each other. Each race has advantages and disadvantages to each other, making it an incredibly complex game of chess where life and death hang in the balance. Terrans are the human race, with a terrible story of how they ended up in deep space. The Protoss are a powerful psionic species with advanced technology who believe in cleansing the universe of their most hated enemy, the Zerg. Zerg are unique in that they are an entirely biological race. Their units, buildings, and everything about them is organic with no technology. They strive to achieve genetic perfection and domination through assimilating the DNA of alien races. Essentially, humanity stumbled into a horrific alien war and was dragged into the middle of it.

“StarCraft Remastered is still just as fantastic and compelling to play as it was nearly 20 years ago.”

While the StarCraft Remastered edition was a hugely anticipated game, Blizzard’s execution of the game was stifling. Booting up the Battle.net App (required to play) led me to a beautifully reworked loading screen and main menu. After several hours of play, I shut down the game to come back later. When I did, however, the game booted up in StarCraft Anthology (also required to play) meaning I was playing the original game, sans upgrade. It took nearly an hour of scouring the forums and seeing the horror of fellow gamers unable to even boot up the original before I found a solution: the game is designed to swap between the original and remastered at any point with the F5 key. It feels like an odd inclusion to the game like they simply want to show off the upgrade at any given moment as you seamlessly swap back and forth between styles. 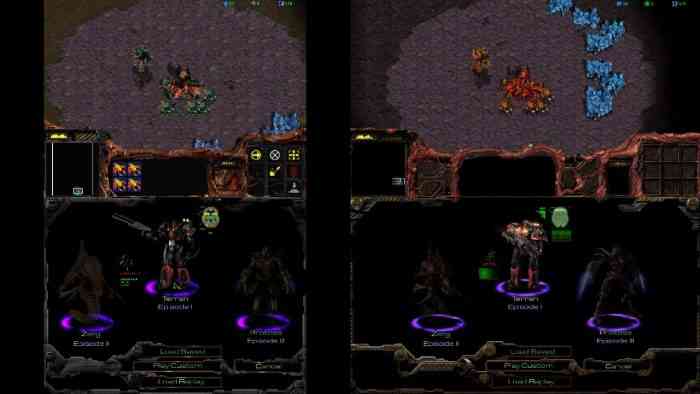 Nowhere was it stated as an included mechanic or control scheme, so it was frustrating to see so many people – myself included – struggling to play. The game has since been updated and will always load in the StarCraft Remastered format, but it’s mind boggling to think this wasn’t the default option.

StarCraft Remastered wisely decides to leave its immaculate gameplay alone and instead brings the experience up to current-gen gaming. With 4K capabilities and smooth graphics, new portraits and a few bells and whistles, StarCraft Remastered is still just as fantastic and compelling to play as it was nearly 20 years ago. It has the perfect blend of balanced gameplay, multiplayer options, incredible story, and nostalgia all rolled into one, and any StarCraft gamer should be drooling at the chance to return to the Koprulu Sector. 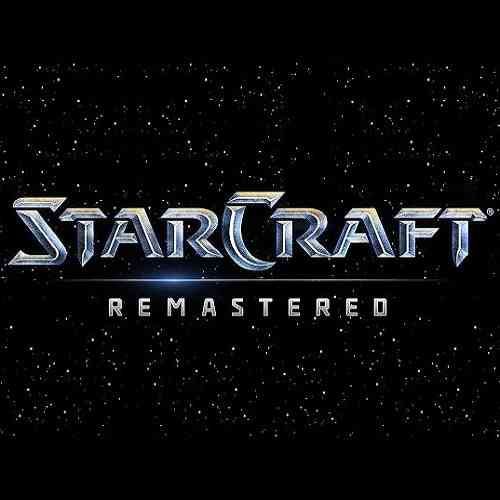 Vampire Survival Game V Rising Is the No. 12 Game on Steam Right Now
Next Hangry Bunnies From Mars Review – Hungry and Angry is Just The Worst
Previous F1 2017 Review – No Longer Stuck in the Cockpit, At All