Zen Studios has an excellent track record with digital pinball tables, be they flat screen under their Pinball FX line or Virtual Reality. Besides Star Wars on the flat-screen side, they have done tables for Marvel, Williams, Jurassic Park, The Walking Dead, Aliens vs., Bethesda, and many more. Clearly, they have a lot of pinball experience. They have already brought a staggering nineteen Star Wars pinball tables to consoles in flat-screen versions.

Zen Studios are no slouches at VR pinball either with their Pinball FX2 VR line of tables. Here they have a Season 1 pack that includes five tables: Castlestorm, Wild West Rampage, BioLab, Paranormal, and Earth Defense. They have also done a Universal pack that includes ET, Back to the Future, and Jaws. Lastly, they have made a Telltale Games Walking Dead VR pinball game too.

I can attest to the quality of their tables owing to many of the flatscreen tables and several of the VR versions. There are many cool things about playing pinball in VR – true scale immersion being the big one. What Zen Studios have also done is flesh out the experience by placing the tables in a virtual rec-room cave environment that changes to match the theme of the table chosen. So going from a Paranormal table to a Castlestorm one will take you from SF/monster/spooky to medieval castle themes.

Further to that, objects and characters related to a table appear on the sides of the tables to further the immersion. Plus, the entire environment of the room changes. The view out of the arcade’s windows also changes to match the theme as well as the lighting further enhancing the mood. Subtle and very effective.

With their latest release, Zen Studios have turned their attention to bringing some of their Star Wars tables to VR. Based on their previous releases, my expectations were high. When it comes to pinball games, the force is with Zen Studios. But does this release reflect the light or dark side?

When you fire up the game, you initially start at a giant screen TV where the menu options are. Once you exit the TV screen, the virtual equivalent of a Star Wars dream fan cave is yours to tour. The room is laid out with bits and pieces of iconic set pieces, including the holo table section of the Millennium Falcon. The room is filled with empty display areas, be they trophy cases or pedestal-type affairs, waiting for you to fill them up. There are cases for character models, vehicles, and lightsabers to name a few. All of the collectibles are earned through playing all the tables.

Also sprinkled through the room are empty picture portraits ready to house the many pieces of art collectibles of many of the characters that exist in the SW universe. A large portion of the floor is taken up by a huge Millennium Falcon throw rug and at one end of the bar is an R2D2 style jukebox. From here you can select from a wide selection of Star Wars soundtrack cuts. It’s an impressive collection of music, most of which you unlock as you play the tables. 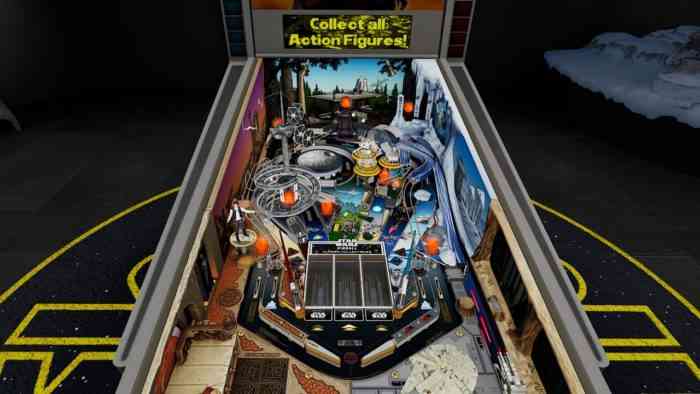 As for the tables themselves, Star Wars Pinball VR launched with eight tables including two new ones: The Mandalorian – a given, given how popular the Disney+ series is, and Star Wars Classic Collectibles. Alongside the new tables, the remaining six tables are remastered versions of previous releases. Only one table is visible in the fan cave, and you can access the other pinball tables from a popup menu from this location. Unfortunately, choosing a table will not change the environment.

Zen Studios would no doubt argue that the entire room is already done in a Star Wars motif. True, but I missed the ambiance provided in their previous VR pinball tables. What you get with each table are the associated characters. So, for The Mandalorian, you get Baby Yoda in his floating buggy on one side and The Mandalorian rocketing in and out on your other. I have to say, this aspect of the game was also better implemented in the FX2 VR tables. With those tables, you could watch the characters out of the corner of your eye. With the Star Wars tables, they are placed further away so you must look away from the table to see them properly. It’s a little thing but I found it distracting.

If You Know, You Know

From a physics point of view, the games play true to form as per Zen Studios’ previous releases in the Classic Mode. If you choose Arcade Mode, then more forceful things happen. There’s not much to add here. All the expected pinball behavior is present. The flippers flip, the bumpers bump, and the ability to tilt the table are present. As always table tilt must be used judiciously, or you will end up locking the table and lose your ball.

An added touch that will be really appreciated by novices is the detailed breakdown of each table. Pinball is not only a game of reflexes and precision but of exploration. In the real world, it can take many hours of gaming to determine how a table works and what targets need to be hit to not only multiply your score but unlock the next game level. Not an easy task and sure to be frustrating for newcomers. The included table manuals are a big boon for all. 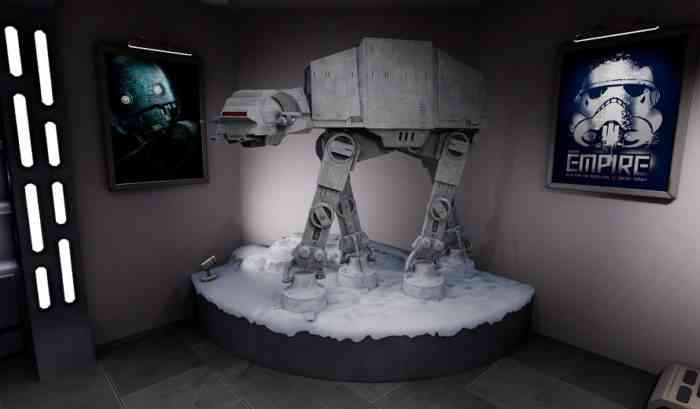 Zen Studios has added a Campaign mode where you must choose between the Dark and Light Sides. Campaigns are not something one would expect to see in a pinball game. Here the campaign is the way of determining which set of collectibles you wish to focus on. Choose the light and you’ll pursue the Rebel collectibles. Choose the dark side and you’ll collect the Empire memorabilia. Not all collectibles are attained through the campaign mode. Some are achieved through reaching specific objectives on specific tables. These two tonged approaches complement each other in short/long term play styles. They allow players to quickly build up their virtual collections while making them work to reach the more iconic pieces. As per de rigueur with pinball game, Leaderboards are included. Boasting rights for high scores are a big part of pinball and what Star Wars fan doesn’t relish the chance to show off their mastery?

This is every Star Wars collector’s dream come true. The game contains a staggering number of collectibles. The tables look and play great. And the inclusion of real Star Wars music as you play the tables really adds to the already immersive VR experience.

This is a great pinball collection but in its current state, it comes with a BIG caveat. The game crashes. A lot. It seems to be related to the online connectivity portions of the game. Before the game and servers went live, the online portions did not crash. Now it crashes every time you try to access the leaderboards. In its current state, I do not recommend picking this collection up. Keep a tab on the game and wait till you hear these issues have been addressed. Once they have, this is a for sure pickup.

*** A PSVR review code was provided by the publisher ***