I remember when I got the original Pokémon Snap cartridge on N64 and slapped that bad boy into Nintendo’s latest console. I spent the day exploring beaches, caves, and forests trying to find every little nuanced-trick for the very best picture. Using the Poke Flute to make Meowth dance, luring Pikachu to the surfboard, and getting three Jigglypuff’s to perform a concert! I knew all of the ins and outs of the game and every trick to be found. 22 years later, Nintendo has revisited the IP with New Pokémon Snap and I had to know whether or not the game had taken the time to evolve with love and care, or if it was a simple cash grab while we wait for Pokémon Legends: Arceus down the road.

New Pokémon Snap is a first person rail shooter, except instead of shooting guns, you’re taking a far more serene approach and trying to photograph Pokémon in their natural habitat. Players will travel across the Lental region aboard an upgraded version of the NEO-ONE; the very same device used in the original game. In fact, Todd, the photographer from the first game, returns with plenty of helpful tips and guides on how to get the best pictures. You’ll pick your stage and be dropped into the lush environment. The NEO-ONE will constantly move on a preset path towards the end of the level. These stages last around five minutes but feel much faster with a wide array of incredible things to see and do.

Learning To Play Is A Snap

Pokémon as a franchise has expanded to gargantuan proportions in the last 22 years. With hundreds of Pokémon in the series, Nintendo had plenty of options of who to cram into every stage, so much so that it is guaranteed you’ll be replaying every area for hours to snap up those great photo-ops you missed the first time. Sometimes you’ll need to manipulate the situation to encourage new behavior, so the more you play you’ll unlock items that let you interact in different ways: the Fluffruit, Illumina Orbs, and the Melody Player. Each of these items had a similar counterpart in the original game, so it’s no surprise to see them return. While their applications and purpose are solid, they each felt a little underwhelming in practice. 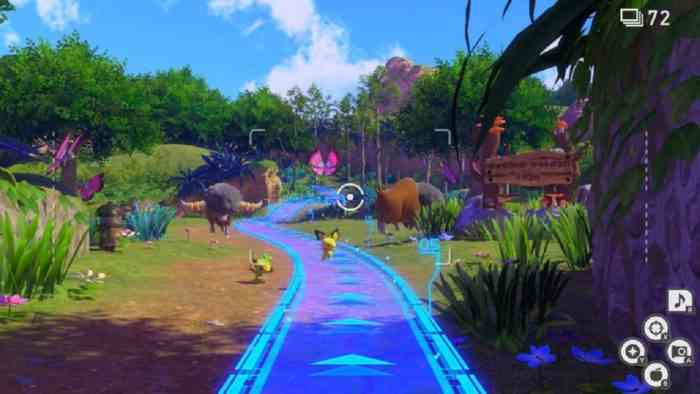 Fluffruit is a snack to lure Pokémon. They will approach it to eat, often getting you a very happy picture, but it can also be used to lure them to an object to interact with. You can also use it to boop them, making them angry or dazed. It’s a great and simple tool, but Pokémon take a long time to pursue the fluffruit, and the arc in which they are thrown has no real weight and floats more than falls. Considering you don’t have the option to stop moving, there are some photos you need to just wildly fire Fluffruit at the highest angle possible and hope its helping you get the Pokémon in position for a decent picture down the path. If it had a bit more weight and speed or a projected arc display it would make for some far superior planned shots that don’t feel rushed and haphazard.

Illumina Orbs need to be unlocked for each region in the game and burst on impact (similar to the original games Pester ball) These illuminate the Pokémon and can sometimes produce new effects for pictures. It’s a matter of trial and error to see what works, but I found that more often than not it didn’t do much but make the Pokémon glow, which wasn’t worth a whole lot of points. Finally we have the Melody Player. This replaces the Poke Flute and plays a short tune which can awaken sleeping Pokémon, make some of them dance, or just infuriate them. It’s another fun way to test the Pokémon and see what they will do, but it’s always the exact same melody over and over and over again. In the original Pokémon Snap, the Poke Flute played a few different tunes as you would be using it constantly, but here it’s just one tune and it quickly burrows in your brain in an intrusive way.

Your camera is equipped with a scanner to find clues and hidden Pokémon in the environment. The electrical signal from the scan can have an effect on Pokémon, giving you a ton of options for different photos. It sounds great, but now there is a frenzied cluster of button mashing to see what happens with every new encounter. You round a corner to discover a Pinsir staring at you. You can’t slow down or stop the NEO-ONE, so you’ve got around 15-20 seconds to get a reaction and a decent picture before he is out of range. Run the scan, play the Melody, toss an Illumina Orb, and throw it some food. Did you hit the Pinsir or did it land in front of it? Is it angry or hungry now? Which of all those things made what reaction happen? You can of course stick to one or two of these until you play the level again, but while you’re focused on that Pinsir I guarantee you missed something behind you and you’ll need to replay this stage multiple times just to see what Pinsir will do.

Each stage can be leveled up based on the experience points you get from Professor Mirror when showing him your photos. As a stage levels up, new Pokémon appear. They start behaving differently and interacting in new and unique ways with some stages having day and night time variants. This not only extend the longevity of the game (the original Pokémon Snap was less than 10 stages) but it allows for more opportunities to include Pokémon across their daunting catalog of monsters. Some of these changes and interactions are truly adorable and it creates a sense of anticipation to unlock the next level and see what they will do next. 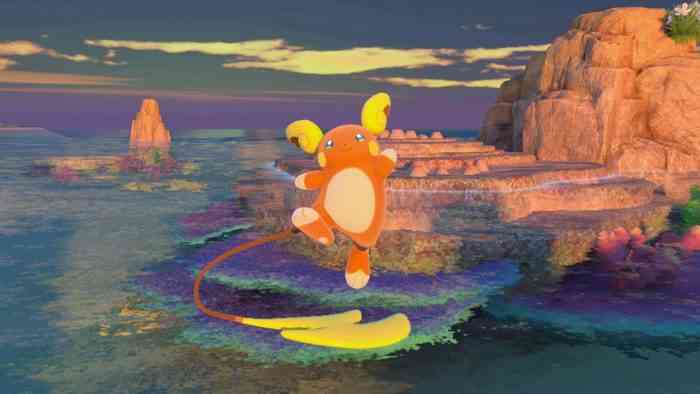 When taking your photos to Professor Mirror, each one qualifies as one to four stars depending on the action of the subject. You can only submit one photo per Pokemon after each stage, which is then rated for size, positioning, actions, and other features. What qualifies as an acceptable photo is much more lenient this time around as Professor Oak used to be incredibly strict and fail photos for not having a Pokémon’s face or being centered. Professor Mirror, on the other hand, will accept almost anything. Every Pokémon in the Photodex has space for four photos; one for each star rating. If you happen to only take pictures of what you think will be an amazing four star photo, you might have a tough time breaking that habit and trying to take, well, a crummy basic one star photo just to fill the page. You might find yourself struggling to take one star photos!

New Pokémon Snap takes everything the original game did right and only adds onto the original, successful formula. It is beautiful and relaxing while being frantic and fun. There is an almost overload of things to see and do on each stage with plenty of challenges to complete. Seeing your favorite Pokémon come to life is an absolute treat, but making the game bigger and better while adding certain limitations feels like a recipe for artificial longevity. With so much going on at any given time and imperfect means of interacting with the Pokémon – coupled with the ability to submit only one photo per outing per Pokémon at a time – New Pokémon Snap is asking you to complete dozens of perfect runs per stage to fill the Photodex. While the repetitive nature might be just fine for kids, this game may be better in short bursts for adults and perfectionists.


Get a Bunch of Sweet Items in Metroid Dread Special Edition