Whether we like it or not, mobile gaming has become a massive market and a very lucrative one for many companies. The ease of access and market share give mobile gaming developers an edge that other developers have to fight for. Because of this, you could say that mobile games have become… redundant, to be blunt. A certain formula has been quite successful, so why fix something that isn’t broken, right? In flies Star Trek Fleet Command, a game that brings the Chris Pine era Star Trek Universe to mobile platforms, that utilizes much of the same formula that has been successful but gives it a unique storyline that isn’t normally found on a mobile platform. The inclusion of a storyline that unfolds around your choices coupled with warping into one of my favorite worlds makes Fleet Command a very worthwhile choice to add to your phone!

You play as an independent who meets Scotty and with his help, build a first ship and station and journey on from there. While it plays like a traditional mobile version of a real-time strategy, the main storyline puts you on a path where you get to choose where your allegiances lie. Ultimately, you choose your path by allying with either the Federation, the Klingon Empire, or the Romulan Empire, but that’s getting a little bit ahead of ourselves. As an independent, you can weave your way across the galaxy, taking contracts and assignments from fellow independent races, the empires, the Federation, or whoever you may cross paths with. The decisions you make during these missions will ultimately lead to who you ally with, so choose carefully.

The gameplay is what you would usually assume from a game on a mobile platform as every upgrade runs on a timer with you scooping up time speedups as you go which can really help out with some of the larger upgrade times. You want to build up a formidable space station, as well as a fleet that can combat the enemies across the galaxy that are ever growing in difficulty. There are an incredible amount of star systems for you to explore, each of which houses places for you to mine resources, relocate your space station, and battle rouge hostiles. Once you crack level 10, you also make yourself vulnerable to attacks from other players, which obviously will play out for further shenanigans once you end up choosing a side.

Additionally, you can unlock more powerful ships as you do more research, unlock and upgrade officers for additional bonuses to your fleet, and your regular upgrades and research grant you better and better options. With this kind of model, you will eventually hit a point that I heard a lot about that kept me off this review for an extra couple of days. While there are lots to do, your upgrade speed will eventually meet the timers of your research and building and you’ll encounter a real slow down at level 10. While this only lasts for a day or two while you catch up to the enemies who are suddenly vastly more powerful than you are, but nonetheless, my constant check-ins took a real downturn once I hit this plateau. Of course, you have a ton of new options at level 10, but you’re also going to be outperformed by every computer-generated hostile until you can level up enough to catch them. While this is a real pain for a little bit, it’s something that you can push through for a more rewarding experience… if you have the patience. 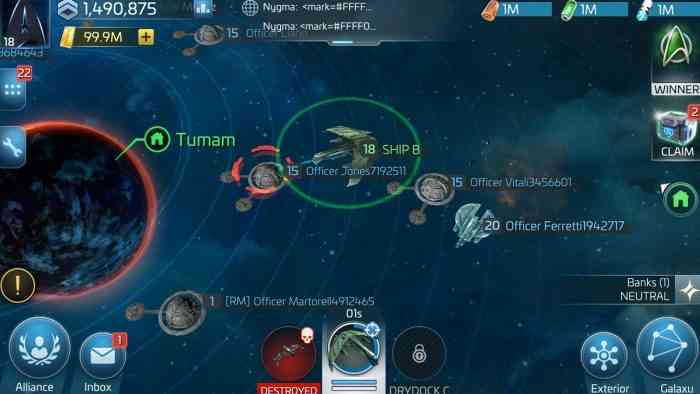 In the end, Star Trek Fleet Command brings something to mobile gaming that has long been missing for me – a game that has a point. While other popular games have offered many of the same options as Fleet Command, this one seemingly incorporates all of the best parts of other games and adds a storyline for you to follow through, promising weeks of commitment and being awaken from sleep when the timer goes off… if you’re a junkie gamer. While I’ve always been loath to recommend a mobile game to anyone, I’ve been impressed with Fleet Commander! It has kept me engaged for a week and I have no plans in slowing down for the foreseeable future. Even though it’s quite the drain on my battery and every few days my research and building timers leave me in a stalemate, I have really been enjoying diving into Star Trek every so often and sending ships warping across the galaxy, looking for familiar faces and characters as well as building the most formidable force in the galaxy.

If you have been looking for a new game to carry around with you to play on while you wait for the bus, or your date, or a job interview, Star Trek Fleet Commander is a solid investment into mobile gaming. It will keep you engaged, busy, and entertained for weeks to come! For a free download, you certainly get a lot of game to consume and into one of my favorite universes to boot. That’s a one-two punch I can’t argue with.


Star Trek: Discovery is Coming – Here Are 5 Things You Need to Know