During the ID@Xbox Sumer Game Fest, I did my best to download as many upcoming game demos as possible. I tried to play them all, but some were simply forgotten. A few days later, my oldest son asked me to come see this game he discovered on our Xbox Series X. It was the SpiderHeck demo. What happened next turned into one of the most memorable gaming sessions I’ve had with my kids in recent memory. The sheer insanity and chaos that is SpiderHeck hooked our family completely. We played the heck out of that demo. Needless to say, I was thrilled to dive into the full game. Let’s put it this way; SpiderHeck is probably the best local multiplayer game you’ll play all year.

What the Heck is SpiderHeck?

SpiderHeck doesn’t feature a story. This game is all about the fun, over-the-top gameplay. Each player controls a spider in one of many different single-screen arenas. Your objective depends on which game mode you’re in, but you’ll be either fighting against other player-controlled spiders or uniquely designed AI enemies. Your spider doesn’t have any attacks; it can crawl on any surface, jump, and swing Spider-Man style. Around the arena, weapons will randomly spawn. Once you pick up a weapon, you’ll be able to go on the offensive and slay your enemy. There are a ton of different weapons in the game, ranging from Star Wars-inspired light swords, explosives, shotguns, rocket launchers and more. The randomness of the weapon spawns is one of many factors that makes this game so wild. 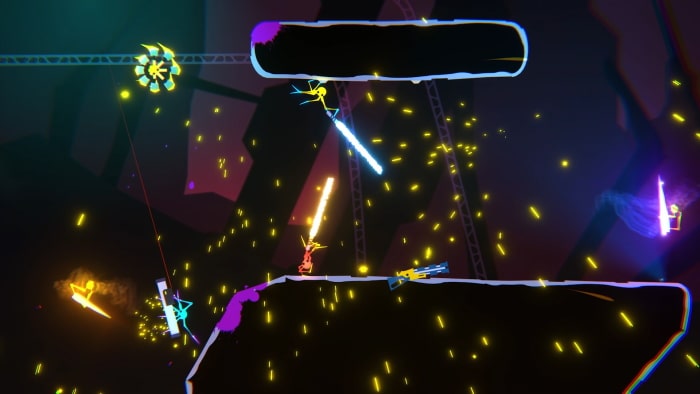 Way of the Spider

There are a handful of modes to play through. There is Versus mode, where you’ll square off against up to 3 other players. In this mode, you can also adjust a bunch of game-changing modifiers for some extra wild fun, like bigger explosions or higher jumps.

There is a Wave mode, where you’ll team up with up to 3 other players. In this mode, you’ll fight against wave after wave of AI-controlled enemies with varying abilities and attacks. You’ll need to work well together – team killing is a very real possibility. Surviving a wave brings back any dead players.

And finally, there is the single-player mode, Tiers of Heck. In this, you’ll be given a variety of different challenges to complete. I didn’t spend a lot of time in this mode. I found it a bit too challenging and not as fun as multiplayer is. With that said, it’s a good opportunity to practice your skills.

We spent the most amount of time in the Wave mode. Working together to kill the enemies while trying to avoid accidentally killing each other was just a wild and exciting time. We’d just keep trying to get further than previous runs. Every few levels, you’ll get the opportunity to pick a modifier that helps improve your odds of surviving.

This helps spice up the mode to avoid any sort of monotony. Despite how much fun this Wave mode is, I do wish developers would make two changes. First, it would be nice to have the option to turn team-killing off. While I appreciate that team-killing adds to the challenge, sometimes it would be nice to play together and not have to worry about that. Second, some different difficulty settings would be beneficial. If I’m playing with my oldest son, I imagine we’d keep team-killing on and jack the difficulty up to add more enemies to the mix. If I’m playing with my youngest son, turning team-killing off and toning the difficulty down would be ideal.

The game utilizes an aesthetic that reminds me of the indie classic N+ but with a very neon palette. The designs are simple, yet still distinct. As you progress through the game, you’ll unlock a variety of different hats to spice up your character – this helps in multiplayer modes too, because sometimes the action gets so hectic, it’s easier to distinguish your spider based on their hat and not just their colour. The enemies and arenas are also quite simply designed, but that’s okay. The soundtrack features some brilliant, electronic-style tracks that really amp up the adrenaline. 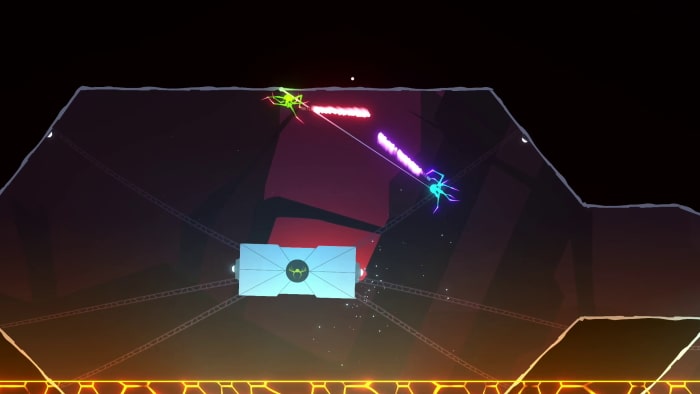 All the game modes, aside from single-player, have the ability to be played online. Unfortunately, I wasn’t able to test online multiplayer out – I just couldn’t find a match. But I imagine local multiplayer is probably substantially more enjoyable. My one frustration about local multiplayer is that the game doesn’t allow for multiple Xbox accounts to sign in at the same time. Only the first player is signed in, each subsequent player is just “Gamertag 2”, “Gamertag 3”, etc. This also means they won’t get any unlocks or Achievements. It seems like a poor oversight. It also creates a bit of a hassle during gameplay when you first spawn in and can’t recall which numbered spider you are.

SpiderHeck is one of the most enjoyable local multiplayer games I’ve played in a very long time. This game takes elements from beloved games such as Smash Bros., Worms, and N+ to combine into a wild experience that was both exciting and humourous. There were times when we would burst out laughing at the insanity on screen. SpiderHeck would make a perfect addition to any game night, especially when playing locally. There are a couple of issues that I’d love to see addressed. I should be able to sign all local players into their own accounts, but this isn’t the case. I wish there were a few more customization options for difficulty and accessibility. And I’d love the ability to create my own arenas. Despite these minor issues, SpiderHeck is absolutely brilliant. Grab some friends and play it as soon as possible.

***SpiderHeck key provided by the publisher*** 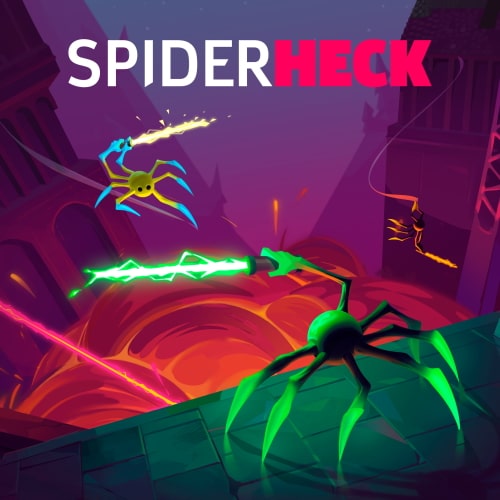 
The Three Best (and Worst) Video Games from September 2022

Bioware Unveils The Next Chapter In The Dragon Age Series
Next Nacon RIG 300 Pro HC Universal Headset Review – Big Sound, Budget Price
Previous Voice of Cards: The Beasts of Burden Review – Not a Burden at All