Can a game like Smash Hit Plunder captivate a player to come back for more by creating a charming world and several ways of playing, but only one gameplay mechanic? The answer for discerning, and for those over the age of six, gamers is a resounding no. Even for novice players, be they so because of their age or this is their first experience playing a VR game, that answer is a maybe, at best.

In Smash Hit Plunder (SHP) you have been bequeathed a castle from your dearly departed grandmother. There’s a catch, of course. In order to maintain the castle, grandmother went into debt and upon your arrival, the castle is locked up until you pay off the debt. You do this by searching areas and collecting any treasure you find and put it against the amount owed.

The polish of the game shows in the graphics. They are very charming and implemented in a Minecraft style which works perfectly for PSVR. Bright colours abound and the minimal amount, if any, of texture detail lessen any graphical strain on the presentation. Your base of operations is a castle room with a great view of the town below. At a table, you will find maps you can scroll through by turning cranks. Above the maps are the various gameplay styles you can choose be it time events or scavenger hunts. Your grandmother appears in ghostly form to provide hints and tips as to what you can do. Also in the castle room are pedestals where gameplay options are accessible. 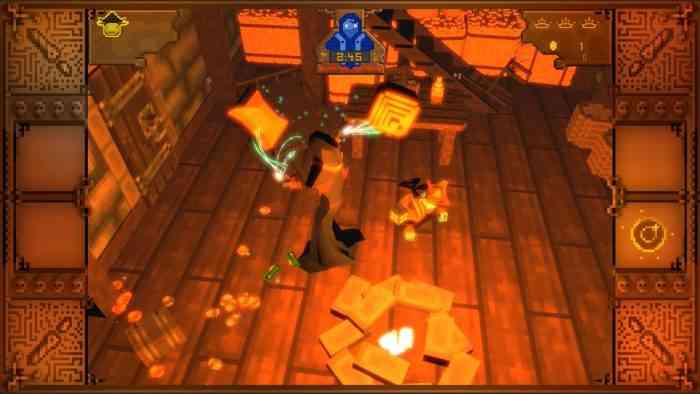 SHP includes a robust selection of gameplay options that are quickly becoming the norm for VR games, including comfort options. You can choose to teleport versus walk, control the rate of turning, restrict your field of vision when turning/moving to reduce VR nausea, and so forth. Control is via the PS Move controllers which work for the most part. Due to the button layout you may find yourself moving during the tense moments when the timer is counting down or you are fending off ghosts trying to block you from treasure.

A nice touch is that you can view your character in mirrors and the wizardly garb you wear with a hood that you can see the edges of when turning is definitely cool. Throw in graphical representations of the controllers as wands and you’ll revel in your wizardly appearance.

One big turn off with the locomotion system is that you cannot actually freely move. You point to where you want to go, click on main move controller button and a path of footsteps fill in the space between you and the point targeted. When you release the button you are moved from your starting to endpoint with no control when traveling between the two. A real immersion breaker.

So the game has charm, looks cool, and sets up a fairly interesting narrative to drive you to pay off the castle debt but then you start playing. The first five or ten minutes are fun as you pick up objects and throw or break them to see if they are hiding any treasure. Any discovered treasure you pick up to pay off your debt when you return to the castle base room.

Picking and dropping items. That’s all there is to the game. All actions revolve around those two actions which if you are counting, is one action less than the three words in the game title. What we have is the basis for a game rather than an entire game.

SHP may provide a diversion to youngsters for a short while but everyone else will quickly wander off for more fulfilling experiences. It’s a shame too, because the tone and look of SHP deserve a better game.

Smash Hit Plunder is available digitally or physical copies can be found at most North American retailers.