It’s confession time: I don’t play a lot of online multiplayer games. Sure, I’ve dabbled with the occasional multiplayer match in Call of Duty and powered up at least one Destiny character, but for the most part, I stay clear of the Overwatch and Fortnite’s of the world. It’s not that I can’t go toe-to-toe, it’s just that I don’t get the same satisfaction from playing an online-centric game as I do from a hefty single-player one. But with Aftercharge — Chainsawesome Games latest 3-v-3 co-op first-person shooter — I was compelled to at least give it a spin, mainly because the concept sounded so intriguing. It’s getting harder and harder to innovate these days in the online space, so it takes a novel idea to really stand out from the pack. Aftercharge at least has that going for it, but due to a lack of modes and content, it begins to run out of fuel pretty darn fast; but hey, it’s still a lot of fun.

Aftercharge’s simple premise is immediately appealing. It pits two teams of three against one another in an arena setting where they battle over energy extractors. While that might sound like standard fodder for competitive multiplayer games, Aftercharge adds a couple of curveballs to the mix. One side plays as robots, or Workonics as they’re called, who are actually invisible and must coordinate with their team to destroy all six extractors scattered around the map. On the opposing side are the Enforcers, who are tasked with defending the extractors and who are granted with invincibility. The robots can be disabled by whittling down their energy levels but as long as one robot remains alive, they can revive their fallen comrades. Enforcers can win the game by disabling all three robots before they succeed in their mission. Got it? Okay good.

No matter which side you’re playing, both present their own set of challenges that can only really be conquered with good old fashioned teamwork. While it might seem like the Workonics have the advantage by being invisible, their ability wears off whenever they are in close proximity of an Enforcer’s gun or when they’re being shot at. Since the robots can’t fire back, they’ll need to act quickly to get back into hiding and work with each other to outsmart the guarding side. For the Enforcers, it’s really a matter of finding the right balance between defence and offence if your team wants to come out the victor. 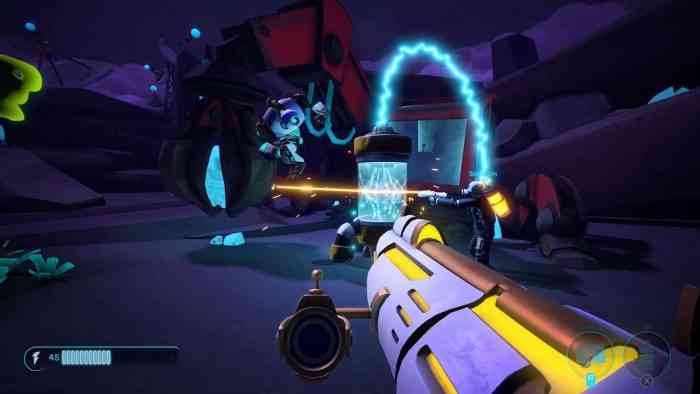 What I liked most about Aftercharge is just how focused the objectives are. The robots have literally no way to defend themselves so punching out the extractors is the only way to get the upper hand. Enforcers, on the other hand, rely on the extractors to give them their weaponry and unique special ability. Their energy depletes with every attack so having an active extractor is crucial for them to win. It’s essentially a game of cat and mouse and both sides will need to strategize carefully and communicate effectively to increase their chances of winning. It’s easier said than done but once you’ve familiarized yourself with how everything works, you’ll eventually come up with your own game-winning tactics.

I found myself playing as the Workonics a bit more frequently and found the best strategies involved either being super stealthy or creating diversions. With the proper team, it was super entertaining to see my strategies unfold. I loved duping the Enforcers by having one of my teammates take the fall right off the bat as a distraction. Another teammate would start hacking away at a nearby extractor while I would go and revive my fallen partner. This method proved useful throughout my time with Aftercharge, and it was interesting to see the guarding side adapt and come up with their own counter attacks. Whenever I played on the defending side, I found that sticking together at the beginning was the way to go, then to have someone take watch over a disabled Workonic when defeated. I won’t go too far into other strategies but, long story short, I definitely got a kick out of developing a playbook of handful go-to play styles.

There’s more than simply choosing either Workonic or Enforcer. There are also characters to choose from as well that have specific strengths and weaknesses. In order to keep your team balanced, you might want to choose a different character than the rest. While this might add a bit more strategy to the mix, the characters won’t really affect your play habits all that much. Because they’re labelled with difficulty ranges, I found myself choosing one based off my skill level. After a couple of hours though, all the characters start to feel the same anyway which makes this element feel a little half-baked. 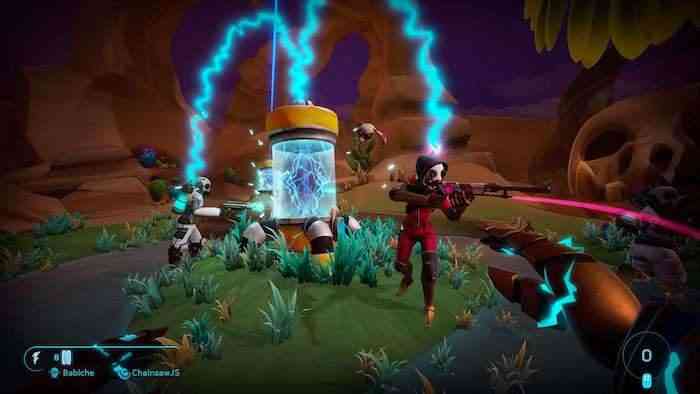 Aftercharge is really good at balanced gameplay and ensuring that both sides have a fighting chance. Matches rarely exceed the fifteen-minute mark and I’ve witnessed a skilled and coordinated team wrap a game up in less than two minutes. This makes Aftercharge very accessible thanks in part to its small, bite-sized matches. It also has enough depth for recurring players to fine tune their styles and to dominate each map, which basically leads into my one real complaint with the game.

With only a small number of maps to cycle between, Aftercharge, unfortunately, starts to lose its appeal faster than I’d like. There just isn’t enough modes and variety to keep players coming back for more. I also would have liked a better progression system that amounted to more than just a few cosmetic differences. That’s all well and good for some people, but it does hinder players from coming back if they feel like they’re not being rewarded. If the developers are hoping to maintain a consistent and high player count (which I’m sure they are) then they’re going to want to keep the game up to date with fresh content. What’s here is a lot of fun but it does feel like an Early Access game rather a fully-fledged and complete package. 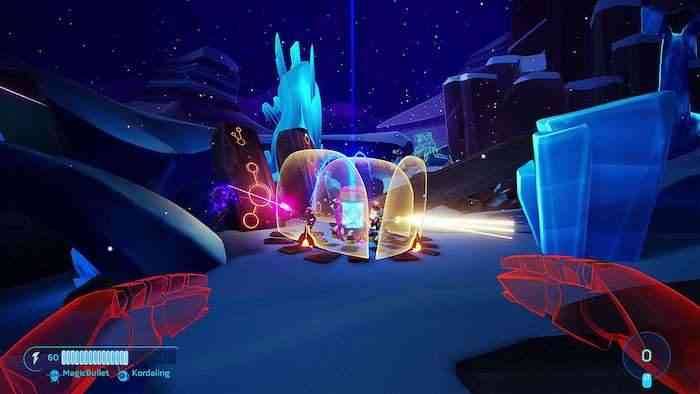 You may have noticed I have yet to mention anything about Aftercharge’s graphics and presentation. That shouldn’t be a red flag for anyone because Aftercharge is a pretty nice looking game. It’s more about the fact that the selling feature of this game is really how it plays versus how it looks. It’s technically impressive too, running at a smooth 60 fps with hardly a hiccup. It won’t blow your socks off but rest assured, the art style adds a much-needed charm to the game.

Aftercharge’s unique concept makes it worth checking out. The 3-v-3 setup manages to pack a lot of fun in small doses while also keeping the scales balanced on both sides. Aftercharge forces players to use their heads over their trigger finger and it’s here where the game really begins to shine. It’s a shame then that there just isn’t enough content here to keep players coming back. Aftercharge looks, sounds, and plays the part but as of right now, it could do with a bit more meat on its bones. 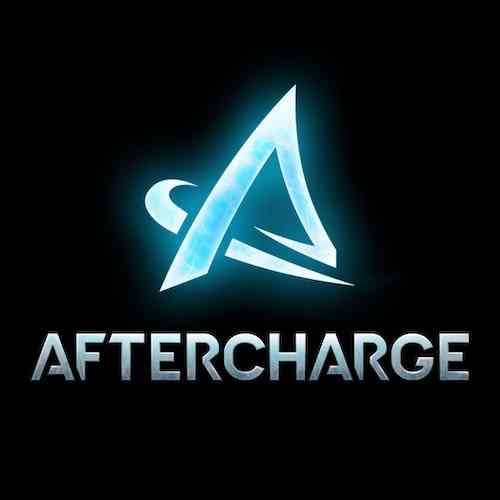