Shinsekai: Into The Depths Review – Darling It’s Better, Down Where It’s Wetter

Shinsekai: Into The Depths Review

Shinsekai: Into The Depths is a very good underwater-themed Metroidvania game. It has an indie game appearance and style, but was developed by Capcom, who are generally not known for smaller title so much as epic franchises. But here they’ve created a solid Metroidvania experience with some very interesting mechanics that should please fans of the genre.

Our intrepid hero starts their adventure by having their underwater base of operations consumed by an expanding wall of ice. Things begin linearly, and the game does a very good job of introducing its mechanics one by one. Although the character walks slowly, they use a jetpack that releases oxygen, which is always draining slowly and is necessary for survival. Up can be pressed at any time to release oxygen and jet around, which creates a well-balanced survival mechanic. Additional oxygen tanks can be found, cracked, and permanently lost. And lose them you shall, for everything from standing on ice too long, to the player falling on its face can crack them. Luckily they’re plentiful early on and well-staggered as the game moves on. I found it difficult to adapt to Shinsekai’s slower style after having recently played faster, platform-centric Metroidvania games like Ori And The Will Of The Wisps.

The player has a stamina bar that depletes whilst climbing or grabbing onto things a la Breath Of The Wild. Minerals can be gathered in order to upgrade the player’s suit. Red water indicates a high-pressure zone that cracks the player’s oxygen tank, but also houses sweet Metroidvania secrets. There are lots of ways to uncover secrets and minerals, including a light that can be shone to highlight breakable objects, and a shockwave that can be created to add markers to the map. Ammo can also be found for the player’s harpoon gun, which is aimed with the right joystick and fired with the R1 button. One of the game’s highlights are its boss battles. They’re large, varied, and always a treat to come across. 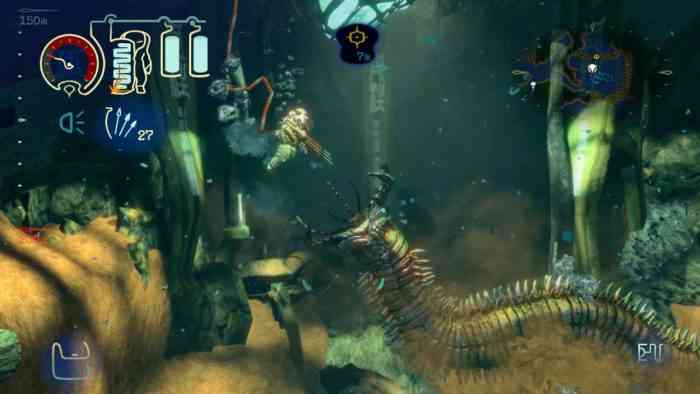 While Shinsekai is a 2D Metroidvania, the graphics create a lush underwater 2.5D world that suit the game’s indie style very well. I really like the floating plankton and particles, and the huge coral backgrounds. They’re nothing we haven’t seen before, but they suit the gameplay perfectly. Oftentimes it can be difficult to differentiate enemies from foreground. The music, however, came is a fantastic surprise. It has a chill vibe, but with really strong melodies. It’s reminiscent of the underwater music from Donkey Kong Country, and is a very listenable soundtrack.

Shinsekai: Into the Depths was first released as an Apple Arcade game, and it’s definitely one that benefits from the Switch’s portability. A couple new features have been added for fans of the original. Another Dive is a time attack mode, designed for players who’ve mastered the game on hard mode. And a Jukebox Mode has been added highlighting the game’s excellent soundtrack. 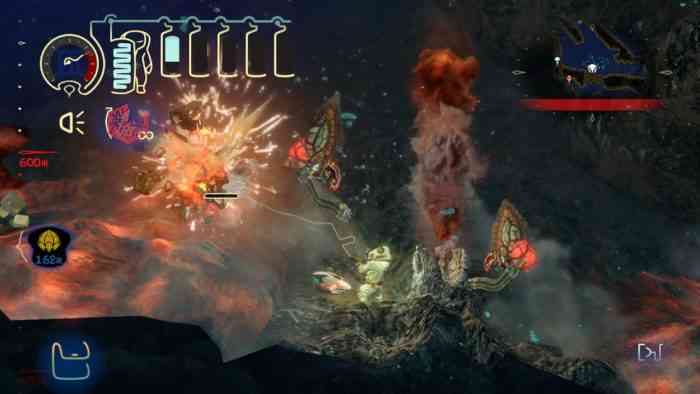 It’s not hard to recommend Shinsekai: Into The Depths as a very good Metroidvania. And anybody looking for a unique one, will certainly find success in choosing it. However, there are a plethora of amazing Metroidvania titles available, and if you’re new to the genre, I can think of at least twenty others that would be a better place to start.