When I was first offered the review for Senran Kagura Peach Ball, I assumed it was a beach volleyball or maybe a dodgeball game. Maybe even a reference to the blue balls this game intends to give some players. But no, the “ball” in said title refers to pinball. For those of you unfamiliar with the Senran Kagura franchise, they are a series of games that have an anime harem theme to go with their varying gameplay. The series has covered many different genres from beat ‘em ups, to fighting games, to cooking rhythm games, to third person shooters, and now pinball. What ties them all together is the cast of sexy anime ninjas and a host of extra pervy features!

The main feature of Senran Kagura Peach Ball is its Story Mode, which plays out like a visual novel, with lots of text on static backgrounds. There’s a lot of telling and not a lot of showing in terms of animations, but I really appreciate that the game provided a narrative to drive the gameplay. The story goes that Haruka accidentally exposes several Senran Kagura girls to a green goo that turns them into beasts reminiscent of Felicia from the Dark Stalkers games. But she, with help from the player, can cure them with a “Peach Ball”. To directly quote: “With the proper vibrational force, it will produce a special mist that can restore their humanity.” And to create that force? Well they’re in an arcade at the time, and a pinball machine is suggested. As silly as the story is, the writing is excellent. Although it doesn’t require that you have played other games in the Senran Kagura series, the storyline doesn’t spend much time introducing the characters to players either; it assumes familiarity with the franchise. There is no English language track, but the Japanese voice acting is hilarious.

There are tons going on in each pinball game: girls to knock over, Peach Missions, fairies to hit, etc. and it’s almost impossible to follow everything at first. As a casual pinball player, I found the extras overwhelming. They do however add depth to Peach Ball that makes it endlessly replayable. Despite the awkward start, if the player just starts playing they will eventually realize that they are trying to trigger Sexy Challenges, which make the girls look less like beasts, which is really just an excuse to gradually remove their clothes. Each course has a girl in it that you have to hit with the ball. Once certain goals have been accomplished, such as bop the girl 10 times, the course gets completed, and a score is given, all of which is saved. Completing a course gives the player money, and releases unlockables for purchase. A missing element I wish the game hadn’t omitted is launching the ball. There was no pull and release control, just a bubbly freak creature that magically drops the ball into play. But I really enjoyed the unique gameplay feature of rattling joycons to shake the pinball table/ affect the ball’s trajectory. 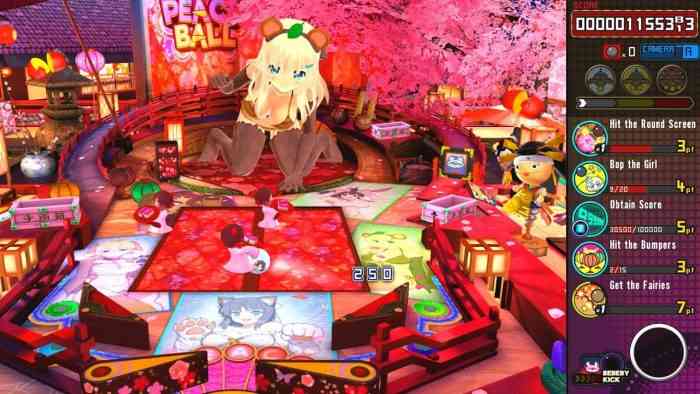 In addition to the Story Mode, there is a Free Play Mode, a Dressing Room, Shop, and Gallery. The Dressing Room has three modes (and I’m not making these up). Costumes allow the player to change the girls, all the way down to their undergarments. Intimacy allows the player to virtually grope the women and spray them with a squirt gun. And Diorama allows the player to create an image out of all the women on a party background (pose choices include Power Cleavage, Power Butt, and Beg). The Shop allows the player to spend in-game money, or purchase DLC (not available at the time of this review) on new outfits for the different girls. The starting number of outfits is staggering though. The gallery features unlockable movies, pictures, music, and voice sounds.

Graphics have a cell-shaded anime aesthetic, and look like a really pretty PS3 game. If you’re playing Peach Ball for the graphics look elsewhere, but they do what they need to do nicely. There’s plenty of boob jiggling animations, to arouse the perviest of players. The music has a j pop vibe that totally suits the game.

Although there is no actual nudity in the game, it gets down to naked with their bits covered… and groping… and lewd poses… There’s also some swearing. Peach Ball deserves its M rating, and that’s going to be a huge part of its appeal. If you’re looking for a pervy Japanese pinball game, then look no further. In the end, I can happily say that I’m glad to have a solid pinball game on my Switch.

**A Switch Code was provided for review**