On paper, Sakura Wars has the potential to be an exciting JRPG soft reboot for contemporary fans of the genre. However, this genre combining game that features action RPG, dating sim, and visual novel elements does not execute as hoped for. While Sakura Wars is a franchise with roots back to the mid-90s, Sakura Wars for the PS4 is a soft reboot that does not require previous knowledge of the franchise, though some aspects will be appreciated by previous fans.

10 years before the start of the game, the Great Demon War results in massive casualties and damage among the world. The game takes place in a restored Tokyo during a fictional version of the Taisho period in 1940. Players take the role of Naval captain Seijuro Kamiyama who, upon a transfer to Tokyo, is expected to captain the Imperial Combat Revue’s Flower Division. Alongside the team’s duties of fighting demons (in mechs, no less), their day jobs at the Imperial Theater take up most of their time. Unfortunately, times are hard for the team as they are facing disbandaning. It is up to Kamiyama to help in restoring the team and theater to their former glory. While the story setup is interesting to start, tropes and predictable scenarios break down the game slightly toward the “anime game” level of storytelling.

The gameplay is separated into two primary loops: exploration and combat. The exploration portion is narrative heavy, and is focused on both walking around the theater and town, and talking to the other main characters. This portion is definitely slower than I would have liked, and the conversation options are relatively shallow. The interactions between characters are quite predictable and many anime tropes can be seen throughout. Despite this, the game does employ some interesting features to the interactions to keep them fresh rather than always having two or three options. A hanafuda minigame also exists, and although was definitely confusing at first, does seem to pick up as you gain more experience in it. While the exploration/narrative portion of the game works alright, it does make the opening portion of the game drag on.

On the other hand, the combat portions of the game were perhaps my more anticipated aspect, especially knowing that I would be dealing with mechs! Unfortunately, the combat in Sakura Wars was simplistic to the point that it could be compared to a “Dynasty Warriors”-styled game, but even a bit more simplified. There are but a few buttons to utilize, such as light attack, strong attack, jump, dash/dodge, and special attacks. Combat portions were not particularly challenging, and movement between areas was pretty slow. You can also switch between the main character and a secondary character, but there’s not much of a difference. All in all, the combat felt like a lot of untapped potential was left on the table.

The game’s characters felt like they would be typically found in most animes, with the main character design being done by Bleach artist Tite Kubo. Though familiar, the characters were still designed and animated well. The game’s graphics were artistically strong, but was not technically smooth. The game’s setting makes for interesting concepts, particularly with the traditional Japanese elements and futuristic technology. Though the game might not have been as smooth as it could have been, the art behind the game stands strong, though the in-combat designs could have used some work. 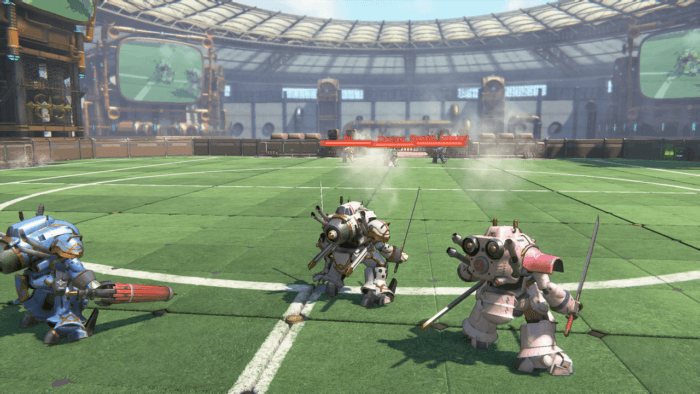 While the main name behind the character design was Tite Kubo, Kohei Tanaka is the name behind the game’s music, as he composed the opening theme. Tanaka has previously worked on Dragon Ball, One Piece, and other Sakura Wars titles. The game’s music works as a whole, but its opening theme is what stands out the most. The game also features a decent amount of Japanese voice acting which is pretty well done. While it is not exactly audio, there were portions that felt like they should have been voice acted, and some that did not require it. Overall, the voice acting itself improved the game’s presentation and narrative.

The soft reboot of Sakura Wars leaves much to be desired but it is an adequate experience that accomplishes what it ultimately set out to do. It’s a decent blend of multiple genres but does not particularly excel at any of them. The setting and backstory are interesting, but unfortunately, Sakura Wars did not fully utilize them to their advantage. With Sega recently doing good things with their franchises, it would not surprise me to see them improving upon a hopeful next iteration of the series. For old fans or those interested in the overall mashup of features that Sakura Wars has to offer, the game may be worth your time.


Sakura Wars is An Inspired Concept That Just Doesn’t Blossom

New Sakura Wars Announced for PS4, Western Release Confirmed for Next Year
Next Gears Tactics Review – Tactical Error
Previous The Procession to Calvary Review – Sinning is as Much Fun as Ever