The Procession to Calvary Review

Terms like “unique” and “original” are thrown around liberally to describe games sometimes, but in the case of 2017’s Four Last Things, from one-man indie impresario Joe Richardson, it was especially apt. Using bits and pieces of classic artworks to create a bespoke point and click adventure through the Middle Ages, it brought a truly fresh and vibrant approach to the sometimes staid point-and-click genre.

Now Richardson is back at it again with The Procession to Calvary, his eagerly-awaited follow up (well, eagerly awaited by me, anyway). Thankfully, all of the cheeky, Monty Python-inspired humor is back, along with those gorgeous iconic artworks. An all-new adventure awaits, and while it admittedly plays it a bit safe and gives you more of what you loved the first time around, it will nevertheless have you once again laughing a lot while you solve some sinfully clever puzzles.

In The Procession to Calvary, you play as a soldier returned from the Holy War, now just ended. You’ve gotten quite used to all the killing you’ve been doing the last few years, and you want to do some more. You especially want to kill a tyrannical leader named Heavenly Peter. So off you go on an adventure to find him and do just that. Your journey to find Peter will take you through an assortment of crazy scenes, meeting and talking with lots of quirky characters, and figuring out creative ways to solve the riddles and puzzles you encounter.

If you played the first game, The Procession to Calvary will feel very familiar. In fact, it is so similar in look and gameplay that it felt to me like a seamless continuation. That is good in lots of ways – after all, there was a lot to like about the first installment. Richardson has packed this sequel with the same absurdist atmosphere and dark humor that had me laughing out loud the first go round, and once again The Procession to Calvary plays like an interactive piece of Terry Gilliam animation. 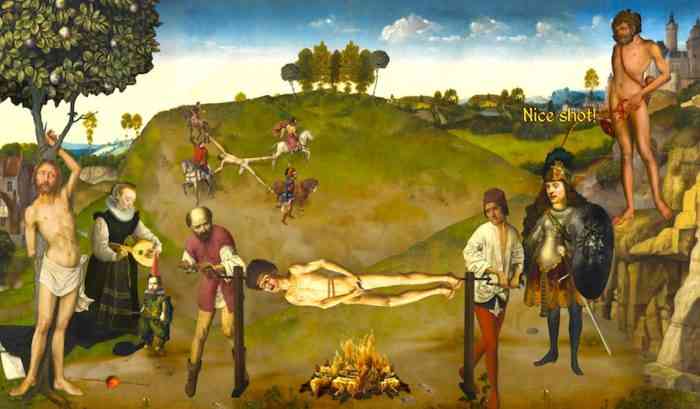 Utilizing public-domain artworks masterfully, Richardson again creates gorgeous set-piece designs that make The Procession to Calvary pure eye-candy. During my playtime, I felt like a wide-eyed tourist, admiring beautiful lands like Renaissance Italy but also witnessing horrifying scenes of Medieval crucifixions and Bosch-inspired hellish landscapes. Music and sound are well-chosen as well, with each scene accompanied by classic works by such masters as Bach or Wagner.

Doesn’t Stray From the Path

Critics might say that Richardson does not really push the envelope with The Procession to Calvary, and that is true. It might have been nice to see some sort of twist on the original concept, as excellent and fresh as it was. Mind you, there are some new moments of meta-humor added, and the fourth wall is broken a few times in ways that weren’t there the first time. While there’s no denying that Richardson sticks to what he does best, in The Procession to Calvary I did see the work of a developer who is clearly more confident and self-aware with his sophomore effort, and I found this sequel to be at least an improvement, if not a reinvention.

A good example of this greater confidence is the game’s puzzles. After a first, rather easy, obstacle, The Procession to Calvary becomes one large multi-part puzzle, broken down into many smaller parts. You’ll visit, and revisit, the same places and characters many times in your playthrough, as you find that this thing you saw earlier is what you need to solve that other puzzle much later. I was very impressed at the well-crafted and intricate design of the game’s main structure, which came together beautifully like an interlocking puzzle-box at the end. There were a few times I was stumped, but there is a nice little hint feature which highlights points of interaction in each scene, which helped me a lot.

In Four Last Things, Joe Richardson invented a whole new genre of sorts. Maybe he doesn’t mess with the formula this time around, but The Procession to Calvary once again delivers all the side-splitting humor and cheeky, clever satire that won me over three years ago. It almost makes me feel guilty to have so much fun playing a game in which I decapitate people, laugh at torture victims, and do the Devil’s bidding (you’ll see). For that I place the blame squarely on Joe Richardson, damn him, and I can’t wait for his next game.