Riptide GP: Renegade, or Riptide for short, is similar to games like Hydro Thunder, Wave Race and the SSX series. As I spent countless hours playing these games growing up, I needed to get my hands on this game. While not quite the same as the games listed above, Riptide is a good substitute. Although this mobile port is not without a few problems, it makes quite a splash in the arcade racing genre.

After choosing your player, either Impact or Poison, and quickly learning the mechanics of the game, you are challenged to an illegal race with Krex. Half way through the race, you are met by the police and imprisoned for two years for illegal racing. Two years later, you meet up with your friend. Depending on the character you chose at the beginning, this is either Impact or Poison, the opposite of your character. Here is where you learn that Krex set you up in order to become champion in the Hydrojet GP League. Without spoiling too much of what is to come, you vow to get revenge on Krex and the Hydrojet GP League and set out to rebuild your reputation by, you guessed it, illegal racing.

“Although I can appreciate that the majority of the content can be found within the single-player story, I was left wishing for some plot twists that just didn’t happen.”

Although the story has different challenges and game modes, including race, slalom, and one-on-one boss races, it takes hours to complete, becoming quite repetitive. In order to move on to the next part of the story, you need to score at least one star on all events in each set, which can become very time consuming. Each race or event, especially the wins, award you with experience and money, both of which can be used to unlock a variety of hydrojets, decals, tricks and skills that ultimately make the game a bit easier as you progress.

The biggest problem I have with the story is that it the storyline has been done to death. After getting in trouble with the law, you try to clear your name, or you try to beat the person who set you up. Although I can appreciate that the majority of the content can be found within the single-player story, I was left wishing for some plot twists that just didn’t happen. 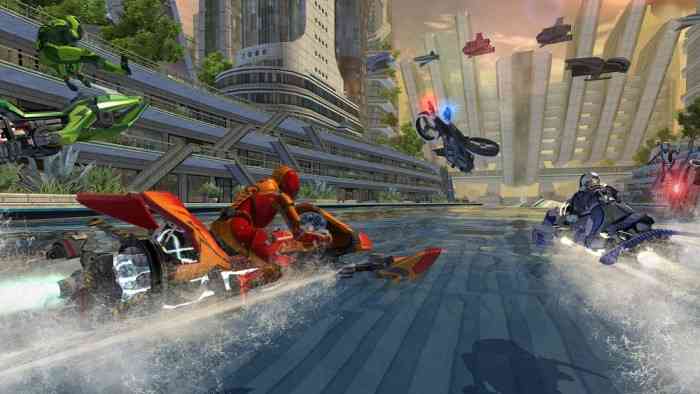 The majority of Riptide is single-player, including three of the four game modes. Quick play, challenge and career are all single-player modes, each with a unique objective and game style. In quick play you choose one of eight maps, and the type of event to play for each game. Challenge allows you to pick an event type to challenge and compete against your friends for the best time. Career mode, is the ultimate time consumer, and you will find yourself working through it just to gain access to better hydrojets and trick sets to use in the other game modes, especially multiplayer. Just for the single-player modes, I spent over 20 hours playing through everything.

In multiplayer there are two ways to play, against friends via splitscreen, or online against seven other opponents. The most difficult thing to get used to is the fact that your opponents are way more intelligent than the AIs. With this being said, there are no other bot difficulties, so multiplayer is a learning curve and the first few games are a challenge. Multiplayer definitely adds to both the enjoyability of Riptide, as well as the overwhelming amount of content available.

“The soundtrack goes well with the pace of the game, and the upbeat electronic vibe is present the whole way through.”

The basic controls are straightforward, with the triggers as your acceleration and braking, X as your boost, and the analog sticks for moving and steering. It gets only slightly more complicated when you add the trick moves into the mix. The analog sticks are used to perform all tricks, with flicks of both sticks in different directions and in various combinations. The higher the level you are, the more tricks you can unlock using your skill points earned in career mode. Better tricks equal more boost which ends up being the differential in most of the races and events, both online and offline.

While I would argue, the tricks are one of the best parts of Riptide, it was often hard to guess whether a trick could be completed from one jump to another. As I watched some opponents flawlessly complete a complicated trick before hitting the water, I also watched others who wiped out, causing them to become so behind in the race they could never catch up. Obviously with practice, executing tricks becomes easier. With this being said, it would be nice to have the ability to stop using a trick while in the air. This would make it easier to avoid wipeouts completely.

The different events available within each of the game modes are the following: race, slalom, elimination, one-on-one boss races and trick events. Race is simple, just place in the top three to earn a star and some money. In slalom you have to weave in between flags on the correct side, either to the left or right of each, with the least amount of misses in the shortest amount of time. With elimination the objective is to be the last one standing. A timer counts down, eliminating the person in last place. After each elimination, the timer resets. One-on-one boss races are just that, a head to head race against a boss with better equipment than you. Lastly, the trick event is a mode where you need to accumulate a certain number of points. The more complicated the trick, the better the score. Each of these game modes are different, and each have their challenges. This adds to the replayability of Riptide and decreases the repetition in one swift motion. 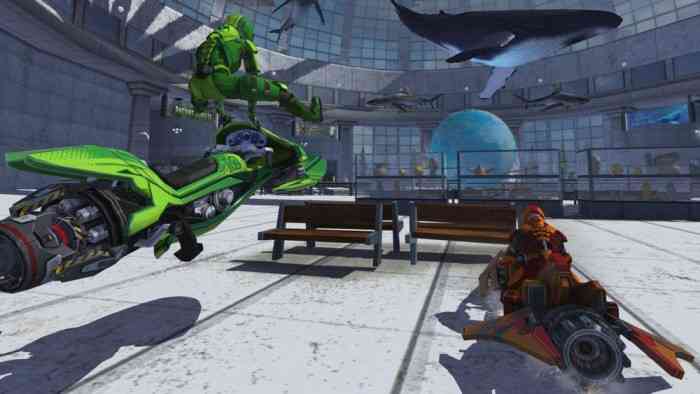 As I mentioned above, the AI difficulty was all over the place. Sometimes the bots couldn’t keep up with me, and other times I couldn’t keep up with them. Something that added to this problem was the drafting in the game. Drafting is what is left behind each player, and as you progress, it becomes easier to boost past players by taking advantage of this draft. This made opponents impossible to catch, even with an ample amount of boost and there were times that an AI had completed the course at least 20 seconds ahead of me.

The graphics are well done, and the customization in the story, as well as the tricks and wipeouts in each race really put them on display. Compared to the previous installments in the Riptide series, which were initially made for mobile, the graphics on Riptide GP: Renegade are fantastic. The soundtrack goes well with the pace of the game, and the upbeat electronic vibe is present the whole way through. The presence of background water and wave noise pair perfectly with the soundtrack as well, and made Riptide that much more enjoyable.

Besides the disappointing storyline, there are only a few minor flaws evident in Riptide, and overall it is really fun to play. Although it is not without its flaws, Riptide does a pretty good job highlighting the aspects that truly make it a great game. With an overwhelming amount of content available, and a variety of game modes to play through, Vector Unit Inc. should be proud of this arcade racing game.