It’s almost getting to be a cliché nowadays to say that a gaming headset offers “high-end quality at an affordable price.” I think it’s quickly becoming clear from the vast array of quality headset options out there these days that the gaming headset market has really exploded with good value products. The RIG 500 Pro HX, Nacon’s latest offering, is yet another example of a solid gaming headset solution for not a lot of coin.

You might not think it’s great quality when you first take it out of the box though. The RIG 500 Pro HX looks, well, a bit weird. It seems very plasticky and lightweight in its construction, with a busy design that I wouldn’t call sleek. It also doesn’t easily adjust on the sides like many headsets, but rather employs a soft extra headband inside the metal main band to fit the unit snugly to your cranium. It looks like you could, in theory, move the earcups up or down by physically removing them from their sockets, but I was too afraid of breaking the headset to try this.

But that initially-lackluster first impression is wrong, so don’t be fooled. That lightness and plastic-looking construction is more solid than you might assume, and it really makes for a very comfortable wearing experience. In fact, the RIG 500 Pro HX is among the most comfortable gaming headsets I’ve ever worn, and that holds true after hours-long sessions. The earmuffs are very easy on the ears, with a nice soft foam that allows your ears to breathe and I didn’t feel hot or sweaty in my time using them. 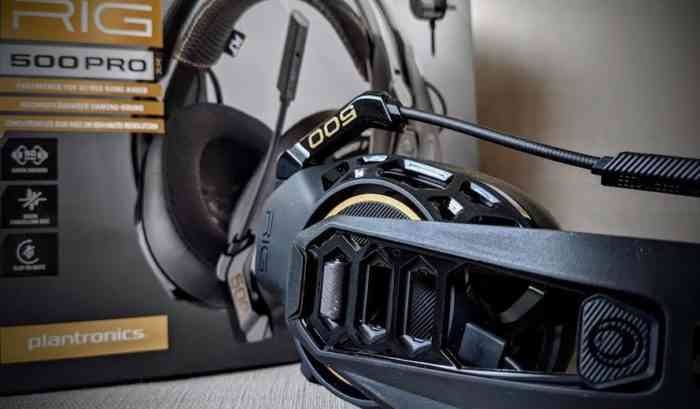 That extra headband also allows the RIG 500 Pro HX to sit nicely on the head, and combined with the lack of weight in the unit, made me almost forget I had them on after a while. If I had my way, I’d honestly still like to have more adjustability, even if for no other reason than to satisfy my OCD need to fiddle with things, but I cannot complain about the level of comfort in this headset even in the most intense sessions.

As for its sound quality, I found the RIG 500 Pro HX to be right up there with other quality units I’ve used. Sound coming out of the 50mm drivers is smooth and clear, with no noticeable tinny sound or other distortions. Range is pretty solid; I found that the speakers could handle various frequencies and noise levels without a problem, except for some loss when bass was cranked up to the max. I heard a slight fuzziness when I listened to a deep-bass song and really turned it up loud. And this, my friends, is where a headset like the RIG 500 Pro HX is separated from the truly high-end, expensive offerings. But for its price point, this is a capable and fine choice that will do the job 99% of the time.

But as far as surround sound, which is fast becoming crucial to the modern gamer, the RIG 500 Pro HX definitely has you covered. In immersive gaming situations, different audio aspects such as gunshots, monster noises, footsteps or ambient sounds were clear, and distinctly manifested themselves in a true, 360-degree audio space. I could pick out individual sounds with ease, and the RIG 500 Pro HX makes immersive games even better. You can also enhance the experience with an optional Dolby Atmos app if you’re willing to go to the trouble; but honestly I found the unit was just fine right out of the box.

Now, the RIG 500 Pro HX is a wired headset, which to some might be a downside but to me it is not even an issue. Because I (and I suspect many other people) simply plug my headsets into the Xbox One gaming controller, there is really no less freedom of movement with the RIG 500 Pro HX than you’d get with a wireless headset. One thing I did find wanting, though, is the detachable mic. It’s fine, but tended to be too sensitive, with a lot of background noise picked up along with your voice. That can be an issue during multiplayer situations, where your teammates are hearing your clicking noises or even other people taking in other rooms. Even worse, it’s not customizable so there’s no way to optimize it and reduce these issues.

I was also not impressed with the volume control. It’s a sliding bar located about halfway up the power cord. I found it to be very imprecise and I often had to fiddle with it up and down to get the exact level I wanted. Plus, it would often get moved if I brushed my arm on it. That is definitely not ideal when you’re in the middle of a hectic online mutliplayer session. I would have much preferred that the RIG 500 Pro HX used a dial for volume rater than this method.

But for the price of $44.99 US, the RIG 500 Pro HX is another gaming headset that offers a very good value for the money. It might have a few design issues and it isn’t the prettiest unit I’ve seen, but in the comfort and sound departments — the elements that really matter — this is among the best gaming headsets I’ve come across. Try these cans on for size and you won’t regret the purchase. 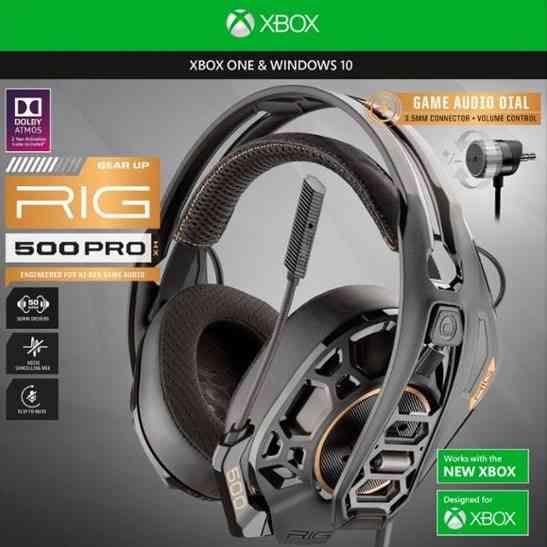