Sludge Life is a first-person adventure game made by Terri Vellmann and doseone where your primary objective is to tag as much graffiti as possible (for the beginning at least). Really, this is a setup for exploring a factory/town/grimy sludge island teetering on the brink of collapse, and this is a pretty cool setup. With a title screen modeled after old computer desktop backgrounds and a player character named GHOST, Sludge Life is going for a very specific Grunge Aesthetic™.

And you know what? Overall, Sludge Life achieves that Aesthetic™. Well, at least I think it does, since I’m about the last person you should go to when it comes to deciding whether or not something is Authentically Grunge™, to the point where I’m not even sure I’m correctly identifying the subculture Sludge Life is going for.

Also, that was the last time I’ll use the ™, I promise.

While I may not be versed in what exactly is going on with the fashion sense of the taggers in Sludge Life, I like to think I can do a better job of describing the world they inhabit. When the game starts, the youthful tagger GHOST that the player embodies wakes up in a shipping container where they have clearly been spending their sleeping hours.

With some simple controls for crouching, jumping, and tagging clarified early on, you’re set up to explore the maze of cargo, the disinterested workers who manage it, and the sludge itself that forms the basis for this world. The universe is simultaneously deeply unclear and strangely familiar, and that’s what part of keeps it interesting.

I made a bold claim about being able to describe this game’s setting, but I’m already failing to live up to it. There is some kind of sludge-based economy and/or factory, the workers who make the sludge go-’round are on strike, and everyone is generally dissatisfied with their lives no matter how many cigarettes they smoke or banana slugs they eat. Their world is trash enough already that few care about and even less try to stop the small army of taggers making their way around the industrial refuse.

Tagging really is the main motivation early on in the game, as tagging increases your reputation and cred among other taggers and is the only clear objective starting out. This changes as you go on, but I found tagging to just be the means of motivating me to maneuver the setting, earning Sludge Life a place among the Hall of Walking Simulators™ (sorry, I lied). Personally, I love exploring in games, so that’s usually a badge of honor in my book.

A lot of smaller studios often rely on retro and/or 2-D graphics to hide their difficulty in creating more a contemporary look, but this game doesn’t feel cheap. Its use of bright colors against the backdrop of dingy industrial layouts and the ever-present layer of grime makes it memorable and fun, and the low stress, chill vibe of the game makes it perfect for when you want to pick something up for ten or twenty minutes at a time, something I often had to do while playing during a cross-country drive. 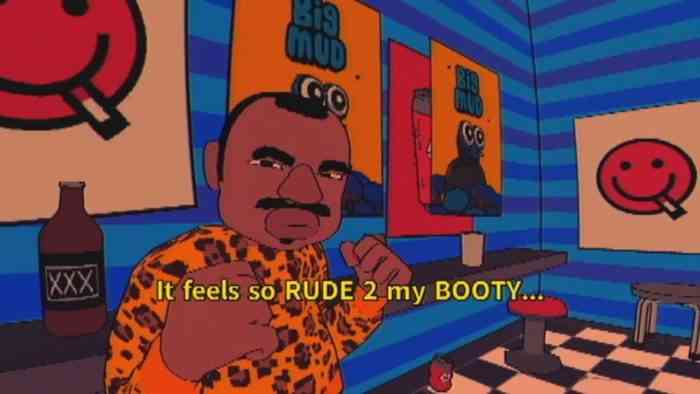 There’s so much going on in the game, too. Every time I turned around (when I wasn’t hopelessly lost) I felt like I was discovering or unlocking something new, including major mini-games or interactive features for the title screen. I feel like I could play this game in its entirety again and still have missed things—and not in that annoying, “ugh, I can’t believe I need to go back” way, but an organic one that keeps things fresh.

I feel like getting too detailed about any events or scenes would be to deny anyone who hasn’t played it the single most exciting thing about Sludge Life, an aspect that I’ve completely failed to get across: SLUDGE LIFE isn’t just stylish. It’s also funny as hell. There were so many times I would be playing and just felt like I had to turn to my partner and show them something that was happening on the screen.

“Look,” I’d say, showing them a man talking about a giant deuce he found. We’d both laugh. It was beautiful. It was love.

This humor isn’t just dialogue, either. There are visual gags as well, so many of them that this is one of the only games where I took advantage of the camera feature constantly because I just loved so much of what I was looking at. Also, I needed to take a picture of all the cats.

The game isn’t perfect, of course, and its flaws are frustratingly central to the core of what makes it fun. I don’t have a very good sense of direction in real life or in video games, so I spent a lot of time just sort of wandering in circles because it felt like trying super hard to unlock or see everything right then would be a betrayal of the game’s overall vibe. Because of that, things got a little tedious as I circled the places I knew and only occasionally found one of the new locations, where things would open back up.

Part of the reason for my trepidation was also my fear of falling from a great height. Playing the game on Switch was not conducive to roaming, because the controls aren’t very precise. This matters less when you’re a few feet from the ground, but when you’re high up and you fall because you couldn’t gauge the distance of a beam, it’s considerably more frustrating. I was usually able to let it go because I just went and did something else—flowing with the vibe, you feel?—but this made problems later on as the story got more involved. I wish the controls had been more precise because this is much of the reason I haven’t gotten all of the endings yet.

One final gripe is that the character designs are…well, it’s good that all of the characters have the lip designs they do, not just the non-white ones, but the optics on cartoonishly large lips are not great. My first interaction with an NPC was with a black worker on strike who had extremely large lips, and it was some time before I realized this was how everyone looked. My partner glanced over while I was talking to someone and immediately pointed out the same issue. I don’t think it was intentional—especially because you can decide whether or not GHOST pees standing up, which I think is both cool and well-done—but the historic use of designs like this should be kept in mind when designing characters.

That said, I really enjoy playing Sludge Life, and I plan to keep picking it up now and then to enjoy the atmosphere of the world that Terri Vellmann and doseone have created. It’s exciting, not disappointing, that there’s so much left undiscovered for me, and I can’t wait to pick up GHOST’s world again, only for some dour fast-food employee to tell me to get lost. Gladly, I’ll say, in this hypothetical scenario I have created inside a video game for myself.