Who could forget the iconic opening and closing of mansions doors as you pass from room to room, or having to find a typewriter to save your game? Do you know what I am talking about? Does the game Resident Evil mean anything to you? Well, the early days on the PSone have been sadly missing from the last few installments of the mighty Resident Evil games. Sure they were a little cheesy, but who didn’t love to turn out the lights and soak up the beginnings of the survival horror genre. Well fast forward to present day, Resident Evil: Revelations on the 3DS once again captures that deep dark feeling of doom and gloom, perhaps even surpassing the glory the older titles attained.

Resident Evil: Revelations takes place between Resident Evil 4 and Resident Evil 5, and reintroduces Jill Valentine as the central character. Since the tragic events of Raccoon City, both Jill, and Chris Redfield (original survivors of Alpha Team in Resident Evil 1), have joined a newly established organisation that assesses and evaluates any potential Bio-weapon dangers. Chris disappears while on a mission so Jill, and her new sidekick Parker, are sent to investigate the last place he was seen. The game centers on a former cruise liner in the middle of the Mediterranean. As we all well know, abandoned and scary locales are never good news in the world that is Resident Evil. Jill has to explore the ship and fend off creatures while discovering and solving any mysteries that the ship holds. The storyline introduces a few new characters as well and helps set the stage for the events of Resident Evil 5.

Revelations is similar in design and execution as most Resident Evil games, and on the 3DS it is truly a sight to behold. The 3D effect is put to superb use and only adds to the immersion of the game. The gameplay is from a third-person over-the-shoulder perspective, and an optional first-person view when aiming your weapon. The 3DS’s top screen is kept completely clutter-free, which is a fantastic tool when you need to access and manipulate essential data like ammunition. I also liked that the map was easy to find on the touchscreen as it is a highly useful reference. The top screen is also an indicator of your damage. Blood splatter will begin to collect on the screen’s border as you are close to death. I found it added to the fear and panic factor in dangerous places, almost raising the hair on the back of my neck as I was being attacked. 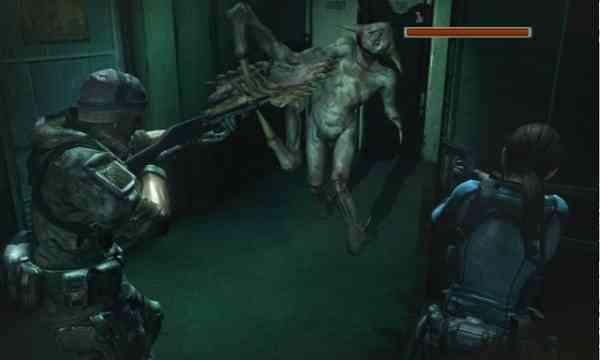 Revelations utilizes the 3DS’s processing muscle to a whole new level. The overall presentation is easily one of its greatest assets, making it a 3DS highlight in visual power and sound quality. The game is full of high quality cut-scenes, which are also rendered in 3D, giving the long running franchise a new and fresh feel. The game did have a few hiccups in framerate and some minor clipping, but these are not deal breakers and overall the game visually shines.

The speakers of the 3DS do a fantastic job of producing those subtle creaks and groans of the ship and the resident nasties. The game is really meant to be played through headphones and in the dark though. The haunting music and subsequent sounds of Resident Evil will make your skin crawl. Finally, the series is scary once again!

The fine folks at Capcom have provided four control scheme, with one of them supporting the newly released Circle Pad Pro accessory. The default scheme, Type A, mimics the layout of Resident Evil 4, with the analog stick used to rotate and move your character and the R trigger aiming your sights as you shoot with Y. Type B works similarly, but with uses combinations of button and stick to move and shoot. Type C is for the circle pad, using the face buttons like a second analogue stick for aiming and movement. Finally, Type D is the option for Circle Pad Pro users, effectively making the game a joy to control with quick actions, including the freedom to move while aiming. None of these control types use the bottom screen as an aiming option, namely targeting with the stylus, it does however provide quick touch keys to access weapon selections, the main menu, and the map. All four options are fine to use with practice, but the increased manoeuvrability the Circle Pad Pro offers is a distinct advantage. My biggest gripe was the herky-jerky aiming when not using the Circle Pad Pro. This was quite shocking at first, but I did get better over time, but it is far from perfect. The Circle Pad Pro helped even more, although the attachment adds quite a bit of weight. 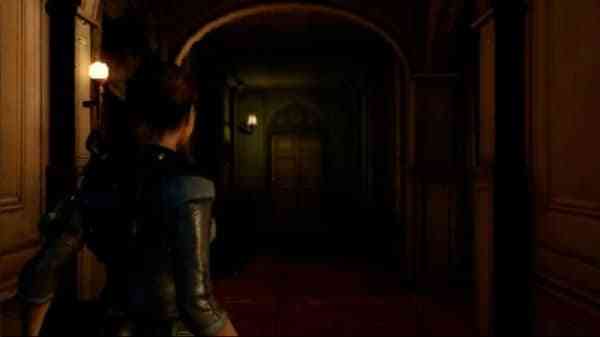 Revelations tends to mimic the progression of the first Resident Evil’s environments rather than the more recent editions in such that the main area of the game, the Cruise Ship, is self-contained so there will be a fair amount of retreading on old ground instead of just moving from one location to the next. The game’s events are split into chapters which makes is more adapt to the “pick-up-and-play” aspect that handheld gaming specialises in, but many of these chapters recycle the same places in new situations. Thankfully this is not often a chore due to the game including new obstacles or enemies at critical points to keep you on your toes.

Enemies this time around are not exactly zombies as they resemble a humanoid slime creature. Regardless of how they look though they are as nasty as ever. Ammunition is placed strategically to fight them off, though aside from the harder boss-type enemies there really is not much too them. That being said, do not get caught up with them as it almost means certain death every time. In regards to the weapons, I really loved how the various guns had satisfying reload and firing animations as you could almost feel the heaviness of the weapons. Some firearms can be upgraded or customized with packs you find in the field, making them more powerful and efficient. Resident Evil’s special herbs once again make things right if you have been infected or have taken damage. The system has been streamlined somewhat this time around, no more mix and matching different coloured Herbs to elicit different effects as one green Herb cures all.

Something new for the series is the addition of the Genesis virus scanner. Switching to this device is done with the D-pad or touch screen icon; this brings up a scanner view that can search out hidden items or enemies in your surroundings. The device reminded me of the similar item in the Metroid franchise. 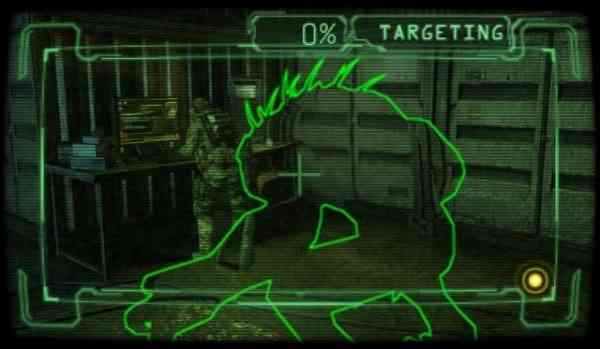 Later, as you make your way through the main Campaign, you will be able to unlock Raid Mode. Like Mercenaries Mode in previous games, Raid Mode involves a selected area of the game and gives you objectives to complete. This is not merely an enemy bloodbath that you hammer your way through, upping your rank as you go. This mode requires you to cover the entire level with a marker at its end. The system resembles a role-playing leveling mechanic, with weapons and further stages being unlocked for play as you gain higher ranks.

The 3DS’s online capabilities are also harnassed, allowing you to team up with another player from anywhere in the world to play through the various Raid Mode stages together. You can either host a game for the level you have chosen or choose from a list of current hosts to join instead. I found matches quite easy to find, as there are many gamers online. I had very few issues with connectivity with only one drop after 10 matches. Online play can jitter at times depending on the strength of the connection, but rarely does it affect gameplay in a negative aspect. Wireless local play is also supported for those who have a copy of the game card each.

Raid Mode is quite addictive and gamers will spend countless hours levelling-up online. The mode greatly increases the game’s content factor after the 10-20 hour main campaign. If that isn’t enough, there is also the mission selection as well, as small tasks that tie into the Street Pass feature trade unlocked tasks with other players. The completion of these opens up even more new rewards in both main modes.

Resident Evil: Revelations is by far the best reason to own a 3DS right now. The game returns with a vengeance to its horror roots with some very addictive gameplay. The bonus of portability aside, Revelations is, in my opinion, one of the best Resident Evil games since the first iconic game on the PSone. Gamers old and new should not miss out on this fantastic game, as it is an example one of Capcom’s very best.