When EA Sports revealed a FIFA soccer game was in the works for the PlayStation Vita I was somewhat surprised.  Not so much in that FIFA was coming to the Vita, but mainly due to the timing of its retail release that was just in time for the official Vita launch in February.  The most recent FIFA soccer game (FIFA 12) arrived last September and FIFA 13 will likely arrive this fall.  It just seemed odd to me we would see a FIFA game dead in the middle of the yearly FIFA development cycle.  You would think we would see a Vita FIFA game when the rest of the batch of FIFA 13 games hit stores.  Nevertheless, EA Sports’ FIFA soccer has arrived for the Vita and I had a chance to give the game a whirl.

After having spent a several hours with FIFA for the Vita I can say that fans of the franchise will be relieved that it still plays very much like previous FIFA games.  Veterans of the franchise will easily pick up the game as it controls very much like its big brother on home consoles.  Overall, it plays and feels great, so veterans can certainly breathe a little easier.  Even newcomers to the franchise should easily be able to pick-up the game as the inclusion of touchscreen controls makes the game a little more accessible to the masses.  Sure, you can still play with the basic controls but for those just looking for a new FIFA experience via the Vita’s touchscreen, this game may be right up your alley.

There is a reason why EA Sports did not call their first FIFA game on the Vita FIFA 12, as many of the features from FIFA 12 did not make it onto the Vita game. Tactical Defending, Precision Dribbling, Player Impact Engine, and some of the online modes are gone.  Certainly this will be disappointing for many; however, FIFA Soccer for the Vita is still incredibly deep and the comprehensive single player mode kept me entertained for hours. 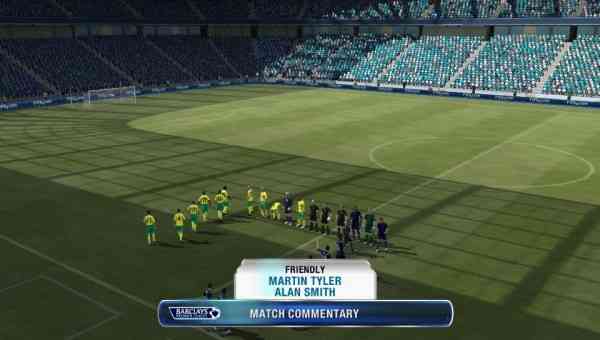 Before you jump into a game, you are asked to choose your favourite team.  The amount of teams and leagues available in the game is almost overwhelming.  Pretty much all the significant teams and leagues are represented courtesy of EA having the exclusive FIFA license.  After you have selected your team you are introduced to a unique loading screen that allows you to fiddle around with a ball as you try to score goals past a lone goalie.  Nothing aggravates sports gamers more than long loading times, fortunately this game manages to help you pass the loading screen wait time with a simple little player versus goalie segment.

Passing and shooting in FIFA for the Vita is much like it has been in previous games.  A meter is displayed below your player which determines the amount of force behind the kick.  Aiming your ball is accomplished with the sticks, and this is nothing new for FIFA gamers.  You can certainly customize your controller layout to suit your needs but I stuck with the classic controls.  It is a simple set of controls but it works, and yet it remains difficult to master.  All in all, the controls feel solid, somewhat familiar and comfortable.  I do admit that it is still taking some time to get used to the Vita controller layout with the sticks being a tad far apart; however, control wise the game plays great.

The touchscreen controls replicate the functions of the traditional controls and should be a welcome addition for those new to the franchise.  You can tap on a player to pass to him and you can swipe the screen to kick the ball in the direction you want to kick.  I stuck with the classic controls but this is mainly due to my stubby fingers that simply blocked too much of the animations on the screen.  Sure it worked well for the most part, but as a matter of preference I preferred the classic controls.  Shooting on goal is accomplished using the rear touch pad.  The surface represents the goal and you use your finger to determine the direction and placement of the shot.  Again this works well, but for me it seemed a bit awkward and I just found the experience ran smoother with the classic controls. 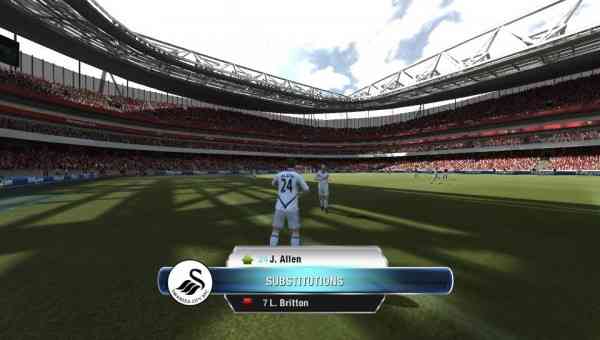 I spent the bulk of my time in “Career Mode” and it plays out very much like previous FIFA career modes.  All the features, stats and leaderboards that people have come to love about the game are back in this handheld version of the game.  You can create a player, select his play style, customize his appearance and position; then you can take him through the career mode.  You can make your way through a 15-year career as strictly a player or you can take your created player through the career mode as a player manager where you manage the team’s line-up and games.  For those that enjoy a more hands-off approach you can even guide your player’s career as a manager as you focus on tactics and improving your line-up.  Unlike many other sports games, the way in which you want to proceed through the single player mode is varied, as there is truly something for everyone from the wannabe General Managers to the wannabe Renaldo’s, FIFA Soccer for the Vita allows you to play your way.

Once you have decided how you want to proceed in the game you can take your team, whether it be an MLS team, a Barclay’s Premier League team, or any team of your choice through a typical league schedule and eventually compete for a league championship.  If trudging through a lengthy career mode is not your thing you can also play in tournaments, compete for the FA cup, join a custom league, or simply jump into a quick exhibition match.

So how does the game play?  Well, quite smoothly.  Granted, and as mentioned earlier in this review, some of the features from FIFA 12 that make it a more realistic experience are missing, and at times this FIFA game can feel stripped down or even dated.  In some ways you are reverting back to the older ways of attacking and defending with such things as tactical defending and precise ball control gone.  Despite this, FIFA for the Vita plays great.  Player animations are solid while moving your player and commanding him to do the various things one would do in a soccer game looks and feels authentic.  Checking players was accomplished much easier than I anticipated and I found I was passing the ball with pin-point accuracy.  My shooting was less than stellar, but with some practice I found myself scoring a little more frequently.  The AI defence was much tougher than I predicted too but that just made scoring so much more satisfying. 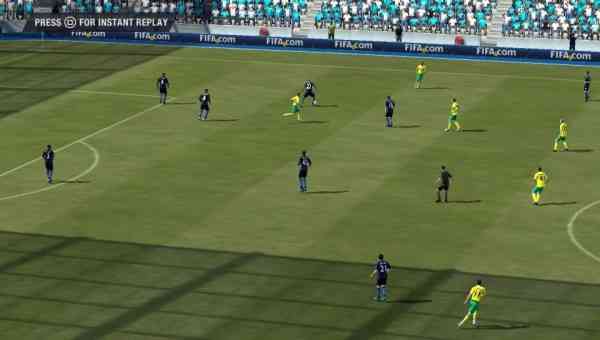 Overall, FIFA Soccer for the Vita is a great looking game.  The presentation is top notch, the menus are slick looking, and the players look fantastic especially when you consider this is a launch game.  Everything from the stadiums, the fans, the grass, the team uniforms to the instant replays all deliver.  Some of the over-the top celebrations and player reactions after a goal are in the game as well.  I was impressed with the way the goalies keel over with their hands covering their face in disgust after a ball gets by them.  As for the stadiums, I was impressed as even Vancouver’s new retractable roof BC Place Stadium is in the game.  Sure it is not an exact duplicate of the stadium but it is close enough and a nice little addition indeed considering the amount of stadiums that are represented in the game.

When it comes to sports game, I always place a great deal of emphasis on the game’s sound.  I want the fans, commentators, music, on field chatter, and the sounds of players competing at a high level to all come alive in the game.  FIFA for the Vita does all of that and so much more.  For starters, the game features a wonderful soundtrack.  Foster The People and The Strokes are just a couple of the artists I recognized when playing the game.  There are many more tunes and all of them seem to suit the game quite well.  In regard to the sound effects, the fans reactions, chanting, and singing during the game sounds great and just like it does when you are watching the World Cup on TV.  The chanting can create an unbelievable atmosphere, heightening the gaming experience.  As with previous games, the commentary crew is competent.  There is some repetition but nothing too annoying and all in all they do a decent job.

FIFA for the Vita features an online mode, which is once again a strong point for the franchise.  The regular suite of features return along with online leagues and a full 11-on-11 soccer match ability.  I found connecting to EA servers can take some time, but for the most part I connected without a hitch.  The games I played contained little to no lag, which is vital in a sport of this nature.

Overall, I would have to consider EA Sports first kick at a soccer game on the Vita to be a success.  The varied controls and deep single player mode alone make FIFA Soccer a must own for soccer fans and Vita owners alike.  Visually the game looks fantastic, and many could argue this is the best handheld soccer game around.  All in all, playing FIFA on the go has never been so enjoyable.