Back when the original Syndicate game was released in 1993, I was just graduating from High School.  My gaming was at an all-time low as it took a back seat to partying, girls, sports and all the other shenanigans that go along with one’s high school grad year.  So needless to say, I had zero exposure to the original game.  Almost 20-years later EA has released “Syndicate” at a time when gamers have simply been inundated with shooters.   Month after month we have seen a plethora of shooters released, each one trying to carve out their own little niche.  Syndicate is no different and follows the footsteps of so many others.  It has all the ingredients that Triple A shooting games incorporate, but I have to be honest, that does not always translate into strong sales and a game that is embraced by the masses.

Set in 2069, Syndicate takes place in a world dominated by massive corporations each jockeying for market dominance.  The three-mega corporations – EuroCorp, Cayman Global, and Aspari – are front and center in this brutal war for control.  All of them are going after the valuable and pivotal American market as they each employ deadly agents as they battle for world dominance.  In this world everything is digitally connected, including it civilians.  You take on the role of Miles Kilo, who is EuroCorp’s latest prototype Agent.  Miles has the latest bio-chip technology, DART 6, implanted in his head.  This gives Miles some unique powers that allow him to slow down time, see through walls, and breach the digital world, including enemies, using a variety of hacking techniques.  Syndicate’s single player story has you guiding Miles through various missions all in an effort to stop of the other “evil” corporations.  That is the games plotline in a nutshell without giving much else away.

The story does take some twists and turns along the way but Syndicate’s single player storyline is very predictable, not to mention it also feels way too familiar.  Perhaps it may be due to the fact I am on a shooter overload these days as I have just played a few too many, but the fact remains that we have all played those games where you guide your player though several missions, encounter eventual boss fights, and somewhere along the lines get betrayed.  I guess that is one of my issues with Syndicate; I just found the storyline uninteresting and far too familiar. 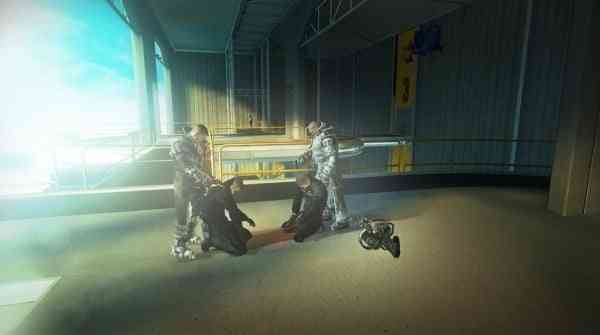 As for Syndicate’s shooter elements, the game really does shine.  You will spend a great deal of time shooting and mowing down enemies.  It is action packed in every sense of the word.  Right from the get-go the game is an incredible challenge so it is critical you effectively use Miles special powers.  These powers are what make Syndicate somewhat unique.  I will explain.

Miles has the DART 6 chip implanted in his head and when you trigger the DART overlay, by hitting the right bumper, the screen goes black and white.  Enemies, weapons, and breachable targets are highlighted in orange once you have spotted them.  Everything slows down a tad and taking down enemies becomes much easier.  You also give out more damage while taking less damage yourself.  This mode only lasts for a limited time though and when it runs out you switch back to normal vision and the DART overlay then starts to re-generate for future use.  Much like Max Payne, and even Alan Wake, the DART overlay sequences play out in very much the same fashion as those game’s similar modes.  It is really nothing new to shooters but it does break up the action a little bit and I found these sequences enjoyable.

Syndicate also features breach sequences where you try to take control of various things.  Breaching is used for a variety of functions including opening certain doors, activating elevators, and interacting with control panels.  You can also breach mines to deactivate or set them off and you can hack into hostile turrets to turn them on the enemy.  Heck, you can also breach enemy armour to make them more vulnerable.  It’s a pretty neat feature and something I found added a bit of pizazz to the gameplay as a whole.

As you progress along the single player campaign you will be introduced to various breach apps.  These allow you to take down the enemies in some creative ways.  For instance, the suicide app overrides the enemy’s biochip and forces them to take their own life.  This often kills nearby enemies as well.  It is a gruesome scene and certainly one that may raise some eyebrows, but it does become a critical combat mechanic when you are outnumbered which will happen a fair amount.  Backfire is another app that causes the ammunition in enemy weapons to detonate.  It stuns the enemy and inflicts damage.  It also makes them vulnerable to attack and much easier to take down. 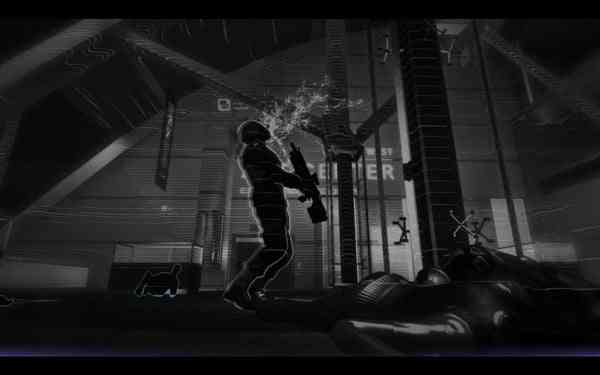 Syndicate does a wonderful job at introducing and training you in the use of these various apps.  Prior to the launch of the first couple of missions, you are taken into a futuristic Matrix looking area where the game takes you through the use of the new apps.  It is a slick little segment and one that came as a welcome relief, as frankly I would not have figured out how to use the apps on my own.

All in all, these different combat mechanics make this linear game move along at a decent pace and manage to spice things up a bit; however, ‘running and gunning’ is where the game really becomes a hoot.  Sprinting and sliding along the ground then mowing down some baddies offers up some pretty good entertainment.  The game offers you a good variety of weapons at your disposal and the enemy AI offers up a good challenge.  They are fast and they never seem to stand around in one spot for very long making it somewhat challenging to focus on your target and take them down.  The boss fights are equally challenging albeit very frustrating as well.  The first boss I encountered was incredibly maddening as I died more then a few times before I managed to take him down.  The boss fights follow the same formula as so many other shooter based boss fights, but it is very rewarding when you finally take one of those pesky buggers down.

The single player campaign features 20 levels and will take you anywhere from 5-8 hours depending on the level of difficulty you select, how quickly you figure out some of the puzzle based areas, and of course how long it takes you to take down those bosses.  It is certainly linear and guided.  Some would even argue the single player is short, but for me I felt the single player was a perfect length.

Syndicate’s co-op mode is where the game excels.  It has a more arcade feel and many more breach apps are available at your disposal.  In co-op mode you play through re-envisioned missions from the original Syndicate with friends.  Here you work cooperatively to defeat the opposition across nine different maps directly inspired by the original game.  You can compete against your buddies for the most kills and points while unlocking new abilities and weapon upgrades.  All in all, the co-op mode is a blast and almost worth the price of admission alone. 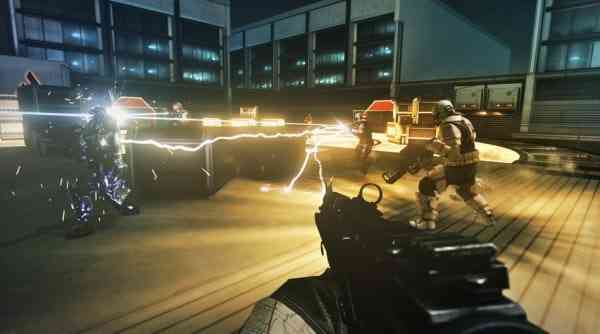 Visually, Syndicate is a decent looking but certainly not the best looking Xbox 360 game we have seen over the past few years.  I just found the visuals a tad murky and not as sharp as they could have been. When the DART overlay is triggered the game looks sharp but in the regular vision mode the game comes across as somewhat dated.  I was however impressed with some of the character animations and cut-scenes.  The level of detail with some of the character designs and animations is impressive.  Likewise, the games cut-scenes have a high production value.

In regards to the audio, Syndicate hits a home run.  I absolutely loved the game’s soundtrack, which had a Chemical Brothers futuristic sci-fi feel to it.  It perfectly suited the game and sounded fantastic.  The game’s sound effects and weapon sounds pack some punch too.  I actually had to turn down the volume in my head set at one point due to the thundering sounds of my machine gun blasting.  It was impressive and very much on par with other great shooters on the market.

Overall, Syndicate for the Xbox 360 is a good shooter, but I would not consider it a great one.  The reality of the market makes Syndicate feel far too familiar, as it possesses the same elements seen in so many other shooters already on store shelves.  Despite this, the combat in Syndicate is a blast and the co-op mode was perfectly executed while the sounds in the game are wonderful and the game’s breach apps manage to inject some life into the game.  If you are looking for an enjoyable shooter to play along side a buddy, or online with some friends, then Syndicate has your name on it, otherwise this may be a shooter you will want to rent of play the demo of before you make the full price retail plunge.