Recompile is one of the most interesting games I’ve played in a while. This entire Metroidvania takes place within a supercomputer’s code, where you play as a bit of code (ahem, virus) inserted into its neural network. Birthed into this strange system, you know nothing but the small bit of information provided to you by your coder: discover what had happened to this computer.

In the third-person perspective, you are represented by a little human-like figure, the programming infrastructure as glitching landscapes, and anti-viruses as murder drones. You explore this constantly changing space, uncovering its many mysteries while shooting down (decompiling) the threats that get in your way. And although the game certainly takes liberties in its representation, it nails the balance of artistic liberties with the real know-how of computer systems to keep everything believable.

Story Told Through Art and Gameplay

This might sound a little strange, but I would call Recompile post-apocalyptic. Yes, it is missing the usual suspects of nukes or zombies, without the aesthetics of dilapidated buildings and broken-down cars, but by definition, I think I’d call the world of Recompile post-apocalyptic. At least from the player character’s perspective, this computer system is the world, and whatever happened to it is causing it to fall apart. The entire foundation of the world is glitching out, much of its systems offline, and its once-busy networks are empty but for the few functioning anti-virus software going haywire.

Your job isn’t as simple as finding nodes to hack to get information. Sometimes, the systems are so broken that you may need to find a way to bypass parts of it, or perhaps find a way to repair it. You may even discover bits of code along the way that you can incorporate into your own, expanding the number of commands you can execute, offering you more ways to interact with the world. Although there isn’t as much backtracking as the genre’s classic examples go, this is where the Metroidvania aspects reveal themselves. 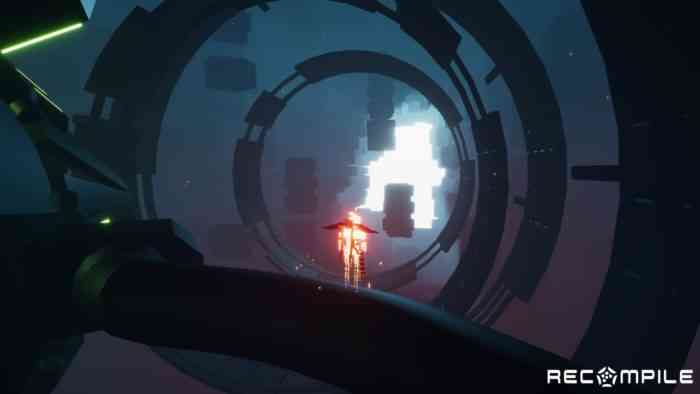 I was most struck by the use of this unique environment in its storytelling. The information provided to you is sparse and oftentimes missing parts from the many system failures. Presented to you in glitched-out code, it really feels like you are recovering parts of destroyed data. What you will find are logs made by the users of the HPRVSR, this artificial intelligent supercomputer that you are in. Bit by bit, you discover things not only about the HPRVSR, but the world outside of the computer. Something’s happening out there and it’s bad, but of course, you don’t get to see any of it. This creates a story full of intrigue and wonder as it leaves you to piece together everything.

Everything about Recompile rings in this sparseness. The game doesn’t hold your hand, it drops you in the world and bare minimum instructions, giving you space to explore things on your own. It doesn’t have to tell you anything because it makes you feel this post-apocalypse by its storytelling method, gameplay, world design, and even within its intradiegetic options menu.

When it comes to indie games, I love seeing developers utilizing their lower budget and resources in smart ways. The visuals of Recompile are simple but striking. Geometric shapes, bold and contrasting monochrome textures, simple effects that mimic graphical glitches. All of this adds to not only the unique worldbuilding but requires less resources to run and produce. The effects are done particularly well, looking so realistic that sometimes you might be questioning if your computer really is dying. Additionally, utilizing code/text as much of the visuals keeping pushing this utilitarian minimalist design even further.

The music and sound design are amongst my favorite parts of the game as well. The trailers don’t do it justice, because I was expecting the usual cliched synthwave fare we’ve seen over and over in modern sci-fi. However, Recompile yet again exercises nuance and minimalism with sound to create an effect that brings the entire piece together. 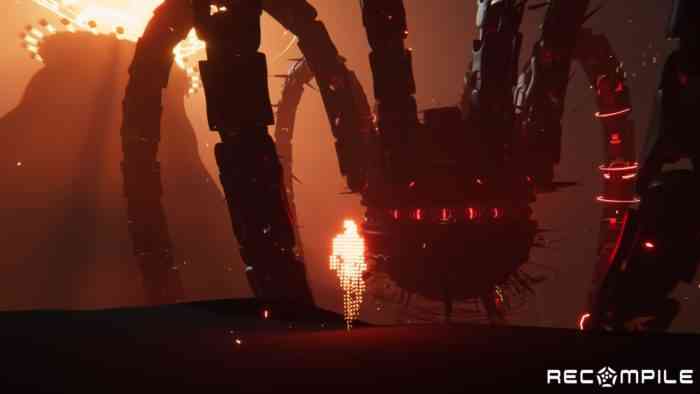 Most of the time playing the game, you are surrounded by near-silence, only the hum of electronics and your footsteps echoing within this dark landscape. The sound reflects the emptiness of the world, making you feel lonely, and maybe even a little melancholic of what this place may have been.

Music is saved for special occasions… and when it does come, they really hit. There are some electronic scores, but I was surprised by how much of it was not. Deep brass that gives the feeling of ancient machinery coming to life, or a lonely piano that delivers the essence of a computer beeping away as it loses power—these are the songs that stick with me afterward.

Recompile is the complete adventure package. It has good gameplay, an intriguing minimalist story, striking visuals and music, and developers who respect the player’s ability to explore on their own. Go get it, you won’t be disappointed.