There is no shortage of gaming headsets these days. We’ve covered high-end cans that’ll run you upwards of over $300 dollars and you can find plenty of cheaper headphones. In other words, you’ve got options; tons of them. If you are looking at snagging a premium headset, you’ll want to do some research. Great sound and comfort will only take you so far. You need a set of cans that are durable, probably wireless and built to last. Razer’s Nari Ultimate headset easily hits all those marks and has one particular feature that makes it stand above the competition.

What separates the Nari from the rest of the pack is the head rumbling technology included. I get it. It sounds gimmicky and we have been down this road before. Many companies have tried and failed at introducing this kind of tech in headphones. Everyone wants more immersion, so it makes sense headset makers have attempted to add a rumble feature into their headsets. Well, it appears not many of them have nailed that feature to date, but Razer certainly has with the Nari.

It’s In The Game

The Nari has conventional drivers but the rumbling effect is thanks to the haptic actuators in each cup. The best way to describe this is to think of it as having subwoofers in your ears. You just get an extra kick every time you hear a booming explosion, a thrilling car wreck or heavy machine gun sounds. There is an added depth and immersion with the Nari that is really quite cool. I’ll admit, I was skeptic going in but after some extended gaming sessions, I walked away satisfied. I never thought I’d dig full head rumbling headphones as much as I do now.

When you consider the quality of these cans, the approximately $199.99 dollar price point isn’t too bad. Sure, that is a sizable dollar figure and will be too much for many, but Razer has a fantastic reputation for delivering high-end gaming accessories and the Nari is no different. 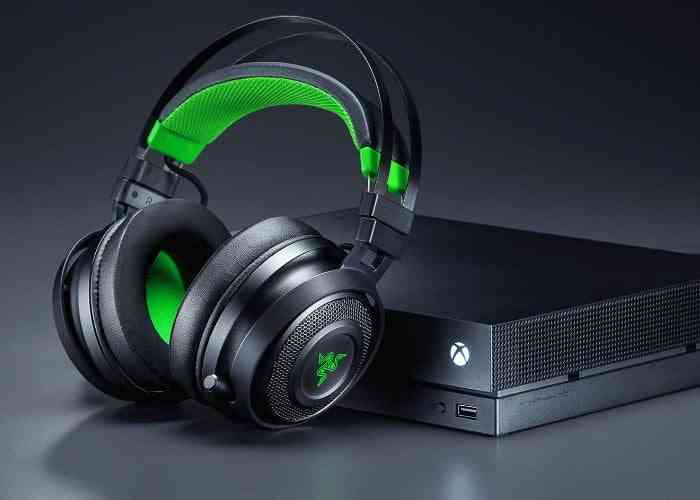 Out of the box, the Nari’s design isn’t anything over-the-top or particularly original. These mostly black headphones feature metallic gray trim and Razer’s Chroma lighting on both earcups. Just like other Razer accessories, these can also be customized. Overhead, there is a metallic band but the majority of the cans are plastic. This isn’t uncommon but I will say, they are sharp looking featuring that trademark Xbox green on the inside of the cups and underneath the headband.

The earcups feature slick gel-infused cooling cushions that actually work as advertised. I tend to easily get a hot head and ears while playing over an extended period of time. With the Nari’s that was never an issue. My ears remained at a comfortable temperature for the entire time.

They aren’t noise-canceling cups but they do a great job at limiting the amount of outside noise coming through. My wife really had to raise her voice to get my attention, so to that end, mission accomplished (sorry Hunny). I also loved the fact these cans have hidden indented eyewear channels that’ll eliminate pressure from glasses. It is these tiny details that make the Nari one of the more accessible set of cans on the market. 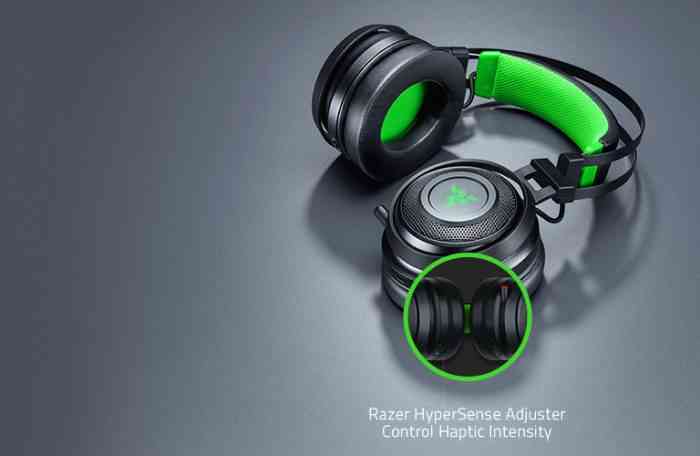 As with most headsets, the left earcup includes the mic, which is retractable. Also, you’ll find the mute and power button on the left, along with a game/chat mixer. There is also a Micro USB port for charging. On the right, you’ll find the volume/HyperSense intensity wheel, along with the toggle button. The first few times I found myself flipping on the light in the room and having to take a closer look at exactly what each button and wheel did, but it didn’t take me long to memorize where each function was located on each ear cup.

The Razer Nari Ultimate is wireless which is great for folks like me who hate dealing with wires. Pairing the Nari to the Xbox is accomplished with ease and you don’t need any kind of adapter to pair it. With PC use, on the other hand, you will need to purchase an adapter in order to pair it. A bit of a bummer one isn’t included but alas these are cans designed for use with your Xbox One. Likewise, I also found it disappointing the headset didn’t include a storage cradle or bag or essentially anything to store the headset. This isn’t a deal-breaker but for the price, I expected something.

Soundwise, the Razer Nari Ultimate delivers remarkable sound and I loved being able to adjust the amount of rumble coming through. HyperSense sensitivity wheel is just a terrific feature. Naturally, I had it cranked, so being able to hear every little creek in Resident Evil 2 and the sounds of rattling gunfire in Black Ops 4 provided for an immersive and intense experience. There was distinctive feedback with all my in-game actions and the result was impressive.

At the end of the day, the Razer Nari Ultimate headset is a wonderfully sounding set of cans. The HyperSense haptics makes for an experience that rivals any other headset on the market. The ear cooling gel cushions are a nice touch and while the price point, albeit a tad pricy, won’t exactly break the bank. It’s difficult to find many flaws with the Nari as I am left thoroughly impressed with everything they have to offer.

**The headset was provided to COGconnected by Razer**