Rainbow Billy: The Curse of the Leviathan Review

The artwork of the Fleischer Brothers and E.C. Segar has resonated with many, influencing a myriad of media. The googly-eyed characters and personified mundane objects have become a mainstay in the medium. Recently brought back into the limelight by the incredible CupheadCuphead, 1930s artwork has found new life and is a core component in Rainbow Billy: The Curse of the Leviathan. Dripping with wholesome charm, is this voyage to the past a journey worth taking?

Set in a whimsical world, you are tasked with bringing joy back to the cartoon-inspired universe. With all color removed by the dastardly Leviathan, the quirky cast of characters is languishing in negative energy. Angry, frustrated and lacking confidence, you must help the inhabitants by using the power of positivity to bring color back to the world.

The Power of Words

In a unique twist, Rainbow Billy: The Curse of the Leviathan steps away from the violent approach to confrontation usually found in video games, and instead focuses on using words to resolve the problems that you encounter. With the gift of gab, you must learn about the creatures you meet and de-escalate situations, restoring them to a state of happiness. Battles take place in a lovely cardboard environment, reminiscent of an arena in Paper MarioPaper Mario. Here you must talk them down from a state of anxiety by speaking to them and using the creatures you’ve collected along the way to lower their defense. Speaking to your opponent will reveal weaknesses represented as symbols. You must then find members of the supporting cast who have the ability to break the corresponding shapes in order to tear down the metaphorical barrier, lifting them out of the dark state in which they had been festering. Upon completion, the creature will join your ever-growing team which helps to create complex battles that require you to use specific characters to complete. 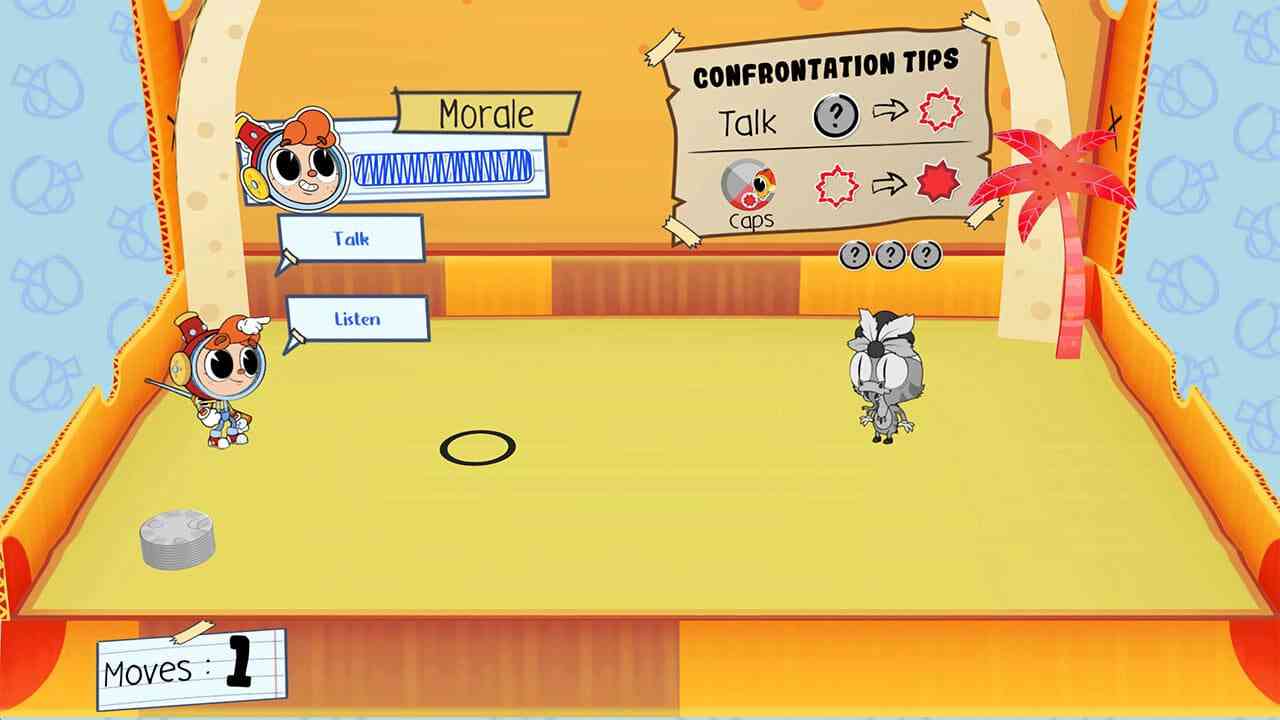 Nurturing and building a relationship with team members is key. They will start with only one ability but you can give them items and treats to level them up unlocking new ways to tackle encounters. Each character will have their own unlocks with different special abilities. Some will boost their own strengths if used on their own whilst others may replenish your health. Although this does give you the incentive to collect items and develop your team, leveling up is a drawn-out affair. You will be required to speak to individuals to work out what item they may like or try everything you’ve collected to see if they take it. Although I like the premise, the implementation could have been refined.

Encounters are dynamic, taking influence from games like Undertale. You can place creatures in rows against your adversary. Positioning them at the front can activate the creature’s ability, adding further strategy to confrontations. In addition, you can line up other characters from your randomized party to knock out several symbols at once or shuffle your deck to find a suitable party member. In order to successfully execute your attack, you will need to complete a mini-game. These simple, yet enjoyable activities will require you to hit several button commandos, avoid obstacles and much more. Mini-games increase in difficulty depending on the strength of the attack, due to this you will need to consider the likelihood of successfully completing the task and position your party accordingly. 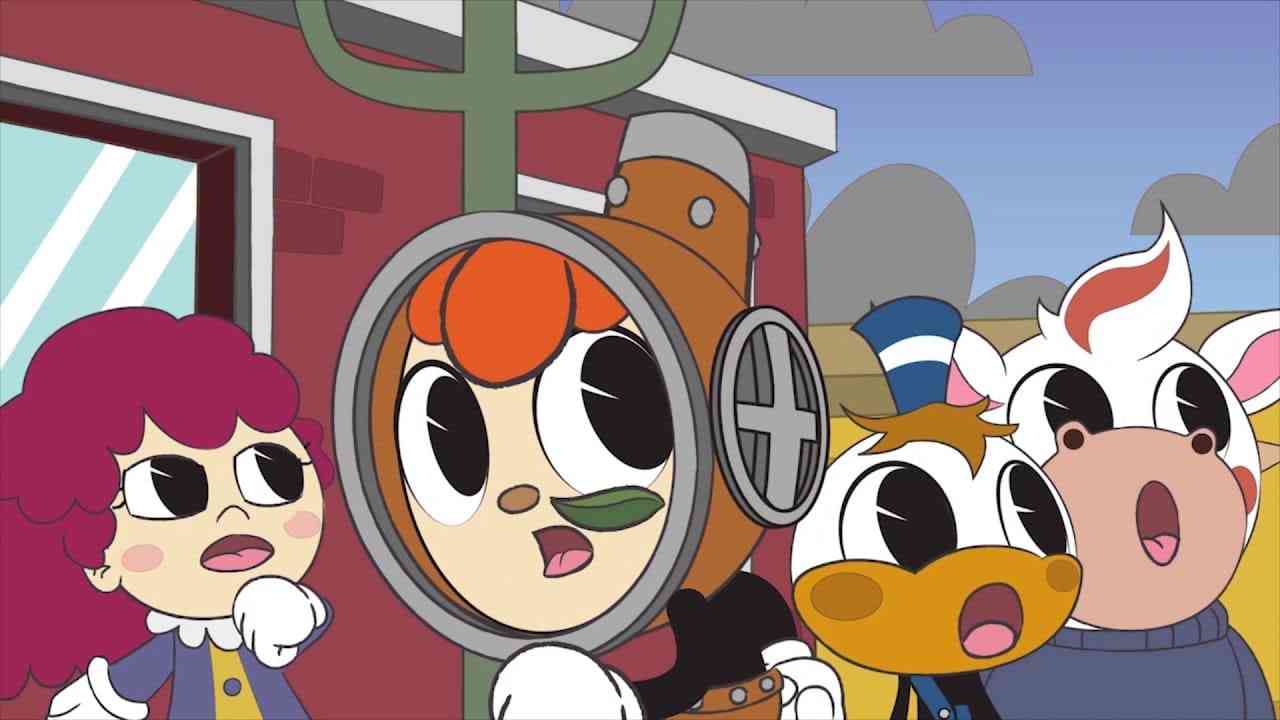 Venturing through the world of imagination is a joy. The delightful environments ooze charm. Armed with a talking fishing rod, you will maneuver through environments completing simple puzzles and platforming segments. During your trek, your fishing rod will develop and act as a key device for traversal and puzzles. Littered throughout are collectibles that can be used to upgrade your party. As well as this, pockets of the environment house extra coins and other items that can be used to purchase goodies from shops. Unfortunately, performance issues are present when wandering the terrain. On the Nintendo Switch, odd stutters occurred, hindering the experience. In addition, I encountered the odd bug where the camera became static rather than following the protagonist and an animation bug that stopped Rainbow Billy from moving. Although these were rectified by resetting the game and the auto-save meant I lost no progress, it’s frustrating to endure some of these issues.

Drifting through the seas is achieved with Rainbow Billy’s trusty boat. Similar to The Legend of Zelda: The Wind Waker,The Legend of Zelda: The Wind Waker, you can explore the ocean to find hidden treasure. Islands are dotted throughout, and you must visit each in order to restore the world to its former self. Each island consists of puzzles and a final battle before bringing color to the area. Although I like the format, islands are a little repetitive, especially in the first portion of the game.

The visuals are incredible. Cutscenes, although few, possess the personality of 1930s cartoons and are an absolute joy to experience. This design ethos permeates throughout with characters fitting the theme. Oddly, the art style featured in your journal doesn’t possess the same quality. Pictures of characters you’ve met are pixelated and are in a lower resolution. Although only a small issue, it takes away from the design. The cartoon aesthetics are accentuated with the happy-go-lucky soundtrack and cartoon-esque sound effects that firmly embed the game in the era.

Rainbow Billy: The Curse of the Leviathan is a lovely, family-friendly adventure. Its non-violent approach means that anyone can jump in and enjoy the 1930s inspired game. Although heavily influenced by those that came before, the game manages to find its own identity with its refreshing take on conventions. Whilst there are odd performance issues and a lack of challenge, it’s still a wonderful experience that deserves your attention.

• Leveling Up Companions
• Some Performance Issues
• Quite Easy 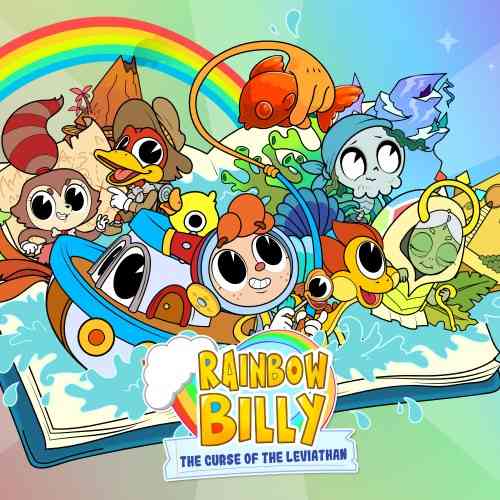 The Dragoness: Command of the Flame Heating Up in September
Next The Eternal Cylinder Review – Rolling Through the Imagination
Previous JETT: The Far Shore Review – Lost in the Cosmos