The Legend of Zelda: Wind Waker HD (Wii U) Review – Now This is How You Remake a Game

Back in the early days of the GameCube I didn’t have access to the Internet and often found myself purchasing games blindly off the shelf taking a gamble without any knowledge of what I was about to play. With Ocarina of Time being one of my all time favourite games I considered buying The Legend of Zelda: Wind Waker as a no brainer despite not knowing anything about it. Given my past experience with the Zelda franchise I eagerly looked forward to exploring Hyrule once again. Well, you can imagine my surprise when I first started playing Wind Waker and I found that my beloved Link was an odd looking, cel-shaded cartoon character. Overcome with grief and disappointment I was quite close to trading it in; however, after I playing for a few hours I soon realized just how fantastic this game was and I came to appreciate just how beautiful it was.

While drastically different graphically, the classic elements of Zelda remained in Wind Waker, from the familiar sounds of opening a chest, discovering a hidden item, to the sword and shield gameplay and the delightfully frustrating puzzles we’ve come to know and love. That being said, the game did suffer from some flaws, particularly with the controls and some awful pacing issues in the end. The latter was so back that I found myself stepping away for months before returning to finish. Despite these issues Wind Waker stands as one of my favourite titles for the GameCube system.

10 years later Wind Waker makes a reappearance on the Wii U with a quite a bang. Reimagined in beautiful HD, with the addition of some interesting new features and improvements to some of the original game’s major flaws, my past complaints are no longer an issue. It’s immediately evident from the title screen that there are some definite enhancements that have been made to this game. While the original Wind Waker was strikingly beautiful, Wind Waker HD’s vibrant, beautiful colours and new lighting are a welcome improvement. I found myself constantly in awe of just how gorgeous it looks. The water looks absolutely breathtaking and the odd cast of characters, including Tingle, the strange man in the tight green bodysuit, look fantastic in HD. My daughter, who played the original a few days before we received the Wii U version, immediately noticed the addition of shadows and the change to the textures right away. These changes are not drastic overhauls, but more subtle and welcomed enhancements to a visual masterpiece. As for the audio, the beautiful soundtrack, composed of many fiddles and flutes, and which has a very Celtic influence, remains the same without any noticeable change. 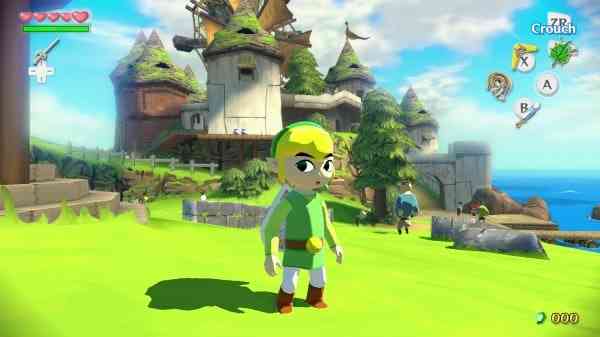 Wind Waker’s original narrative remains untouched in this HD remake. Young Link sets out upon a quest to rescue his sister, Aryll, who was plucked from their island home by a massive bird, mistaken for a young pirate maiden. After discovering that the evil Ganon is holding her captive, Link wields his trusty sword and shield passed down from his ancestors and sails the seas with help of a band of pirates and the Red Lion King. Of course no Zelda game would be complete without huge dungeons to explore and complete, and Wind Waker has its fair share of these filled with numerous head scratching puzzles and riddles, and waves of fierce enemies and epic boss battles.

The awful pacing that I spoke of earlier brings to mind the dreadful Triforce quest in which you are forced to sail the seas in search of treasure charts to bring to Tingle to decipher in your pursuit to obtain Triforce pieces. Thankfully this issue has been resolved with the elimination of some of the treasure maps (and thankfully less Tingle time!). I was also never really a fan of the seemingly endless sailing, but in Wind Waker HD the welcome addition of the “Swift Sail” makes traversing the seas in the Red Lion boat bearable. Oddly enough, this game-changing feature isn’t something that is readily available, nothing alerts you to its existence, and it is found in the Auction House on Windfall Island. We actually missed finding it in our first save!

While it does support use of the Wii U Pro Controller, Wind Waker HD is best played with the GamePad, as it makes great use of it’s features. Rather than constantly pausing to change weapons, manage your inventory, or to check out your map, it’s all right there on the GamePad touchscreen and can be accessed with a simple swipe of your finger. As well, you can use the gyroscope to move your telescope and aim some of your weapons like the hookshot, although I personally still prefer using the analog stick for these kinds of things. I should note that Wind Waker HD can be played off TV on the GamePad screen and it still retains much of its beauty when doing so. 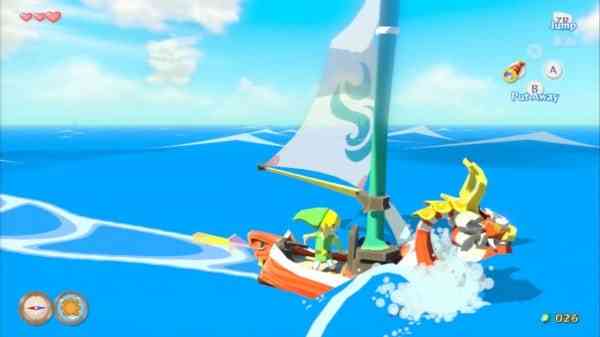 There is no additional content to play through in the Wii U version of Wind Waker, and I’m perfectly ok with that. I think it would feel tacked on and in the end it really wouldn’t make much sense. There is the addition of the hero quest, for those out there who breeze through normal mode, but it’s not quite the same extreme difficultly that past Master Quests from other Zelda titles have provided.

There is no multiplayer this time around. The “Tingle Tuner” that you connected with a second player via the GameBoy in the original game has been eliminated. In Wind Waker HD once Tingle is rescued from his prison he rewards you with a “Tingle Bottle” instead. This is a very cool feature where you can scroll messages and send screenshots in a bottle by tossing it into the ocean and sending it off into Miiverse where a random player will find it washed up on shore in their game.

Perhaps I am a bit bold with this statement, but I truly believe that The Legend of Zelda: Wind Waker HD, a remake of a 10-year-old game, is potentially a system seller, and it quite possibly could be my favourite game this year. It is everything I could have hoped for in a remake as it has gameplay that doesn’t feel dated, it has spectacular HD graphics, it improves most of the problems from the original, and it incorporates fantastic use of the Wii U GamePad. Other than a few frame rate issues I find very little fault with this game as it feels almost perfect, which is why I highly recommend Wind Waker HD to any Wii U owner and Zelda fan alike.