The first time I heard of Castle of Illusion was when I was chatting with fellow Podcast host Shawn P during a recording of one of the recent episodes of the COG Arcade.  He detailed his ‘slight’ obsession with Disney at that time. Surprisingly enough I was handed review duties of this title which, with my lack of familiarity of the original, prompted me to do some research about it. I wasn’t sure if this title was brand new or something reimagined. It turned out to be the latter of course. I took the time to watch some vintage footage of the original Sega title that came out on the Sega Genesis in 1990. To give you some perspective, this title was released on cartridge when I was only nine years old. It was also released on the same day the Super Nintendo Entertainment System was released in Japan. With this title being now being redone 23 years later I honestly did not know what to expect, but the history lesson was enlightening to say the least.

The control scheme is your typical platform game with a button to jump and another to shoot projectiles. Projectiles vary from level to level based on the theme of the environment you’re playing in. Much like the platform games of the past, things are kept simple, which leads to some enjoyable gameplay experiences. For the most part these buttons work well and are responsive; however, I did find landing on the edge of surfaces didn’t always line up with the image on the screen.  As a result of this, poor Mickey found himself often plummeting to the bottom of levels, or even to his death, and I experienced my first moments of frustration with this title when this occurred. 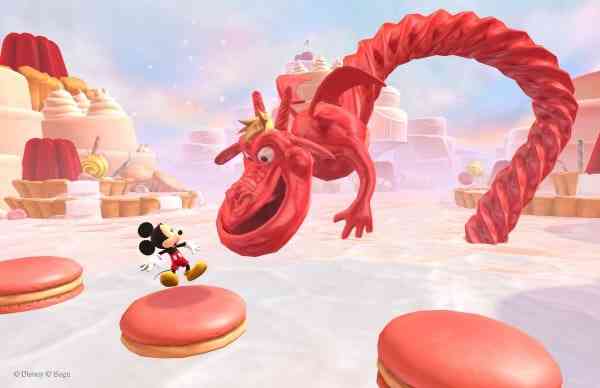 For the most part I found the levels challenging enough that I would have to re-do some parts once in a while until I figured out the “trick” or pattern involved. Finding the correct pattern is imperative to taking down each level’s boss quickly without losing all of your health. This being said, the difficulty of the final boss is a little unbalanced in comparison with the rest of the game. Mickey is faced with a faster and trickier foe and I must have attempted the final boss at least 40 times without success before resorting to Youtube to figure out just how to do it. To the person who posted that video I thank you for successfully relieving another moment of frustration towards this title for me. A progressive increase in difficulty throughout the game is to be expected but not to the extreme level of the final battle.

Hands down Castle of Illusion has to be one of the more stunning graphical presentations I have encountered in an ‘arcade’ title in quite some time. The original version was a 16-bit title and seeing its modern day transformation is simply amazing. Visually it’s a brand new game. They may have taken some inspiration from the original but overall it has a brand new feel and a modern look. The levels all take place in different locations including a forest, toy room, candy land and a haunted castle, and each level creatively utilizes each theme’s elements. For example, in the toy room you’ll find toy blocks for platforms and toy soldiers for enemies and you’ll even see a huge Donald statue in the background. The theme of each level also carries into the ammunition you get.  In the forest you throw apples, in the toy room you’ll throw balls, and in the haunted castle you’ll throw candles.

The background imagery plays a huge part in setting the atmosphere and the animation style is straight out of your favourite Mickey cartoon. The star of the show is Mickey himself, as he should be, and the character animations bring Mickey to life. The other characters in the game are just as wonderfully animated too while the cinematics that happen throughout the game are pretty darn good. This title is simply breathtaking for an ‘arcade’ game that has been revamped for the modern age. 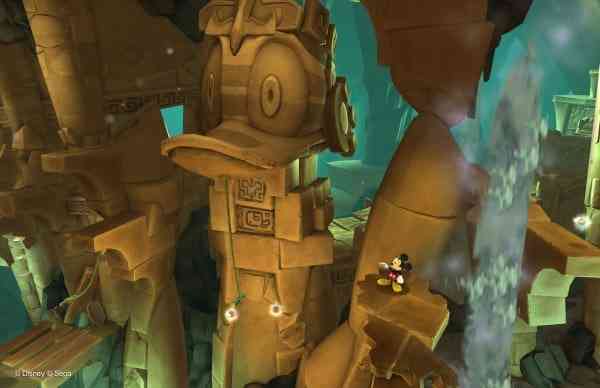 The narrator, to me, is the focal point throughout the game as the voice guided me through the levels with a witty and charming outlook. The voice seemed familiar and upon more investigation I discovered it to be Richard McGonagle. Richard who you say? Well, Mr. McGonagle has done quite a bit of voice work in the world of video games including the Unchartered series, Star Wars Rogue Squadron II, Dragon Age: Origins and Jak & Daxter to name a few.  He has also been a voice actor in shows like Ben 10, Batman: Brave and the Bold and Star Wars: Clone Wars. These are games and shows that I have had the pleasure playing or watching at one point so it was no wonder I recognized him, and I believe that other gamers will find the voice familiar too.

Along with the narrator the game includes the current Mickey and Minnie voices for this generation, along with the voice of the villain Mizrabel. All the voice actors are veterans in the realm of Disney voicework and the end result are voices that are well done in this title. Castle of Illusion also features classical music that just fits in the game and there is an appropriate selection of sound effects to round out the overall Disney feel. If I had to find some room for improvement it would be that I would have liked to have heard more voice acting and interaction between the characters, maybe even having some more characters involved rather than just the trio of Mickey, Minnie and Mizrabel, but overall this is a minor complaint.

Castle of Illusion is an enjoyable, well thought out remake of the original title it is based on. I hesitate to use the word “remake” because it is more of a reimagining as they took all the good parts and built on them to make this wonderful ‘arcade’ title. That being said, although reimagined they didn’t change up too much from the traditional platform formula and I would have loved to have seen more advances in the genre rather than putting out something that one could consider “typical” or “adequate”. Castle of Illusion is a beautiful game in imagery and sound yet we are left with some control issues that need some fine tuning and maybe a couple more options to make it a tad more robust. All in all Castle of Illusion is a solid game that Disney fans and those who might be looking for their next platforming fix will enjoy.

Next Plantronics RIG Gaming Stereo Headset (Gear) Review – A Headset that is More Then Just Speakers in Earcups
Previous The Legend of Zelda: Wind Waker HD (Wii U) Review – Now This is How You Remake a Game