When I settle down for a night of beer and trash talking when gaming I usually let people know I’m going to be unreachable for several hours, because as we all know one does not simply answer their phone while on headset when playing online. The scramble to mute the microphone and answer the phone is just too much of a distraction, not to mention your teammates getting pissed off at you for not having your head in the game. But there’s good news for my fellow gamers who are also attached to their phones (I can’t help it,  I’m that popular) as Plantronics is sending their RIG headset down the pipes this fall and it will let you stay in the game and multitask all those phone calls while still pwning n00bz.

I got my hands on one of the white sets (it also comes in black, but white goes better with my complexion) and was really impressed by how comfortable it is. The rounded earcups fit perfectly over my ears without pinching or smushing anything. It has nice lightweight padding to sit snugly while still being comfortable. I get headaches from tight things on my head but I didn’t have any problems with the RIG as it stayed in place but never felt weighted down which is important when you’re settling in for a long stretch of music listening or online gaming. This headset definitely scores top marks in comfort. 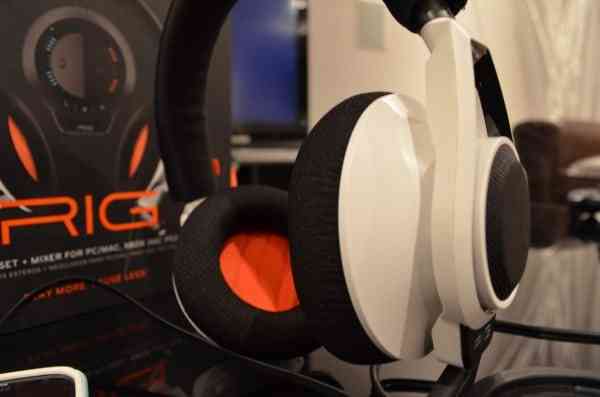 The RIG is a headset that lets you do it all. All of the parts are interchangeable so it really suits all your needs. For people on a budget, or who just don’t want a bunch of headsets lying around, this is a great feature. It can plug into a laptop, tablet, phone or iPod as well as any gaming system, and switching between them is just a matter of popping the right cables in and out. This was helpful because I could keep the cables in place and just switch around the headset when I needed to, cutting down on the likeliness to lose or misplace things which I have been known to do occasionally. Ain’t nobody got time for messing around with cables!

The RIG comes with a boom mic for game chat as well as an inline mic for phone calls if you’re using it with your phone or tablet. Both offer clear audio and I never had problems with sound cutting out. The sound quality with music was great and I tried it out with several different genres of music. There are three EQ settings: Pure, Intensify and Seismic. Depending on what you prefer, you can change up the settings to suit your style and what you’re listening to. Since it is a headset meant for gaming as well, the bass is lighter to avoid distortion during heavy combat sequences so music tracks that are bass-heavy don’t come through as strong as they are on other headsets. The RIG still delivered a solid performance with music though and it can definitely handle a variety of audio styles. It’s not the top in its class for audio but it’s full of many other features that set it apart while still sounding good.

Accessibility is the key in the RIG’s design but the true pièce-de-resistance is the mixer. The puck sized control hub is what sets this headset apart from other ones on the market. This is what the RIG is all about: multitasking. The mixer brings everything together and gives you total control over what comes through your headset. If your phone is plugged in for music, you can balance the volume of the music with the game chat and if your phone is plugged in to answer calls you can balance that as well. You can also switch back and forth between call audio and chat audio with the simple click of a button. All the controls are intuitive and easy to use without having to look down to see what you’re doing. 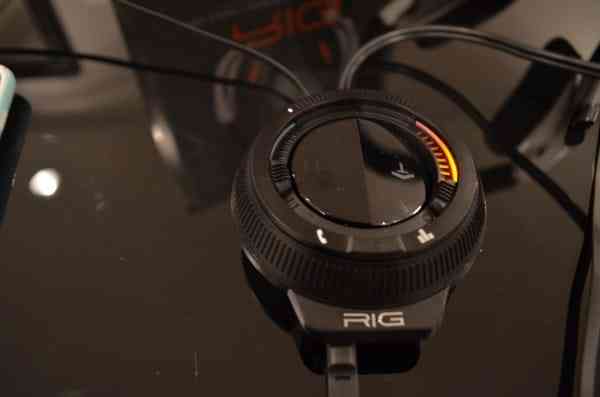 Here is scenario that explains how versatile this headset is:

Your phone is plugged in while you’re playing <insert game here>. Your mom calls: click phone button to answer. You can either switch to phone audio and mute chat, or you can have both going at the same time. “Hi mom, yes I’m eating all my vegetables and cleaning behind my ears…” then someone on chat starts beaking you off at you, “hang on Mom, I’m just doing the dishes, give me one second…” drop phone audio so Mom can’t hear the stream of expletives you spew into your mic, then boost back phone audio to continue discussing who will bring cranberry sauce to Thanksgiving dinner.

Yes, it is that simple.

The RIG is really easy to set up and use and has many great features that have been long overdue, especially given the state of the constantly plugged-in world we live in. Although I still set aside special “me time” for gaming, if I’m playing a couple quick matches before going out I can still answer my phone to make plans for the night without having to stop playing. Not everyone wants to have their phone on them all the time but for those that do, the RIG headset will let you multitask seamlessly.

The RIG is easily worth the $130 price tag if you’ve been waiting for an all-in-one headset, but I will be honest and say that it might not be the best bang for your buck if you’re just looking for a headset to do one job. It offers solid stereo audio and has clean chat capabilities but if you’re not interested in the multitasking features it has to offer then there are most likely other headsets with better audio that you could pick up for around the same price. That being said, Plantronics has definitely carved out its own unique spot in the headset market and has my recommendation for the social gamer who wants a headset to use across multiple devices that still sounds good. It stands out for delivering a solid performance in a variety of roles that can make it your go-to headset for anything and everything, and this is something you don’t see nowadays.

Don’t forget to check out the gallery of pics, after the video below, that I took of the RIG as you’ll see how good they look.