Fold My Life In Any Direction

It’s no secret that Paper Mario has fallen on harsh times over the past ten years. Sticker Star and Paper Jam failed to capture the magic that Nintendo found with the series in the early 2000s. And while Colour Splash was more in-tune with Paper Mario’s roots, players didn’t entirely take to it like Nintendo had hoped they would. In fact, those games were generally so disliked, that many had considered the series dead and buried.

Unsatisfied with the once-proud paper-based franchise’s fall from grace, Nintendo and Intelligent Systems are back to right the wrongs of the series’ past. And while the latest installment may not be the full-form RPG experience that some players have wished for out of these games, it’s undeniable that this is the lifeblood Paper Mario desperately needed. As fans around the world wait with bated breath in anticipation of the final verdict, allow me to calm your worry and ease your fears. Paper Mario: The Origami King is fantastic.

It might be best to get this out of the way upfront: There are no experience points to collect in The Origami King. But don’t run away yet! See, much of the brilliance of Mario’s latest adventure stems from Intelligent System’s often criticized choice to firmly plant their feet in the ground, never swaying from their vision. This isn’t Super Mario RPG. And it doesn’t want to be. There’s no need for Origami King to concern itself with traditional RPG tropes because it continually rewards the player in its own unique way. Right when you think you have the game figured out, you’ll be thrown a curveball, like, for example, an entirely new spin on the combat system. But Paper Mario does an excellent job of keeping the player prepared for these situations with a drip-feed of new items, powers, companions, and more. This eliminated a need for experience points, as so much progression is found elsewhere.

Those upgrades you’ll be acquiring are necessary if you’re going to go toe-to-toe with the tyrannical King Olly. His sick and twisted scheme to fold the Mushroom Kingdom into origami is the backdrop to a sprawling, 25-30 hour adventure. And while the main plot point of Peach (and in this case, her castle) being taken by a big bad boss is here and as recycled as ever before, it all becomes secondary to the journey itself. The Origami King is one of the funniest games I’ve ever played. Its sharp wit will wear down even the iciest of hearts, and you’ll find yourself giggling at your favorite jokes long after you shut the Switch down. But then there are the moments where the developers will pull the curtain back and make the player feel something.

If you told me last month that a Mario game would soon break my heart, I would have laughed. But here we are. Characters are richly developed, and it wasn’t long before I found myself genuinely caring about their lives and wellbeing. Olivia is one of the most adorable sidekicks I’ve ever had the pleasure of journeying with. Bobby has a heart of gold and forever a spot on my team. And Luigi? Well, at least you tried, bud. Meeting these characters and learning of their hilarious yet sometimes heart wrenching backstories was a tremendous amount of fun that kept me invested right up until the end. Equally as exciting was discovering the Toads and the brilliant ways they would be folded into worldly objects for collection. Disguising a Toad as an egg in a frying pan or a flag on the end of pole are small examples of the creativity that’s bursting from Origami King’s seams. More importantly, though, each Toad felt distinctive in how they would speak to you. They’re mostly equipped with ferociously funny dialogue that makes it too difficult to skip past them. I had to hear what every single one of those mushroom-headed comrades had to say. And I loved it. 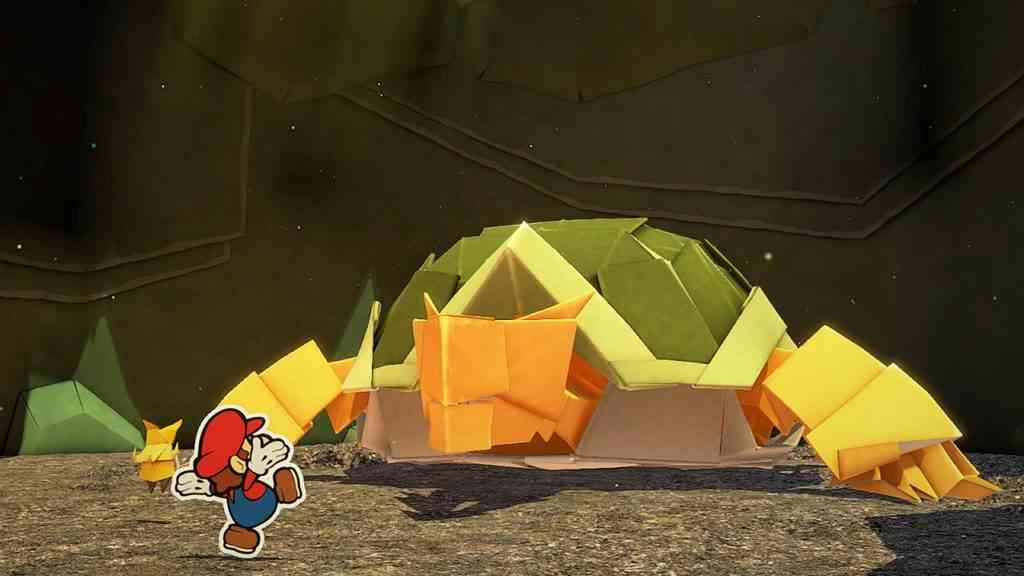 You can have all the touching dialogue and character building you want, but it won’t amount to much if the world is a slog to get through. And I know that’s been a complaint of Paper Mario games in the past. But The Origami King’s gorgeous contrast of flat, paper figures inhabiting a folded origami world works beautifully. I’ll admit, at first, the visual style was a tad jarring. Especially seeing it blown up on a 65 inch TV. As is the case with most Switch games, anti-aliasing issues tend to rear their ugly head, more so in the first world than any other. I suspect this may even turn some off before they get a chance to see how good things can really look. But please, don’t let this happen to you. The Origami King consistently blends vibrant color with vivid lighting effects, creating a version of the Mushroom Kingdom that’s as exciting to explore as it is to gawk at. And the intricacies of the levels never feel overwhelming, but rather, inviting and enticing. I wanted to discover every nook and cranny, and I think that’s something that had been lost in previous entries of the franchise. Sure, new items and combat upgrades are great, but a large part of the experience was simply the excitement of seeing what was beyond the horizon.

Don’t get me wrong though, picking up an ‘HP+ Heart,’ a unique hammer or set of boots, or a new Vellumental power is incredibly gratifying. And that has a lot to do with The Origami King’s combat system – an entirely fresh take on the turn-based battles the series is known for. When a skirmish begins, Mario and his party are placed at the center of four rings broken up into spaces for enemies to stand on. It’s your job to rotate and slide the rings to line your opponents up for either a hammer or a boot attack. Most importantly, Colour Splash players will rejoice to find that there is now a baseline attack that costs nothing to execute. No more wasting precious resources on enemies with two hit points left. It’s a system that’s incredibly simple to understand and easy to get good at but inevitably becomes more difficult as the game rolls on. Figuring out the most challenging puzzles and earning coins based on how well I completed these fights consistently pushed me forward, adding to the sense of real character/player skill progression that no bundle of experience points could match. 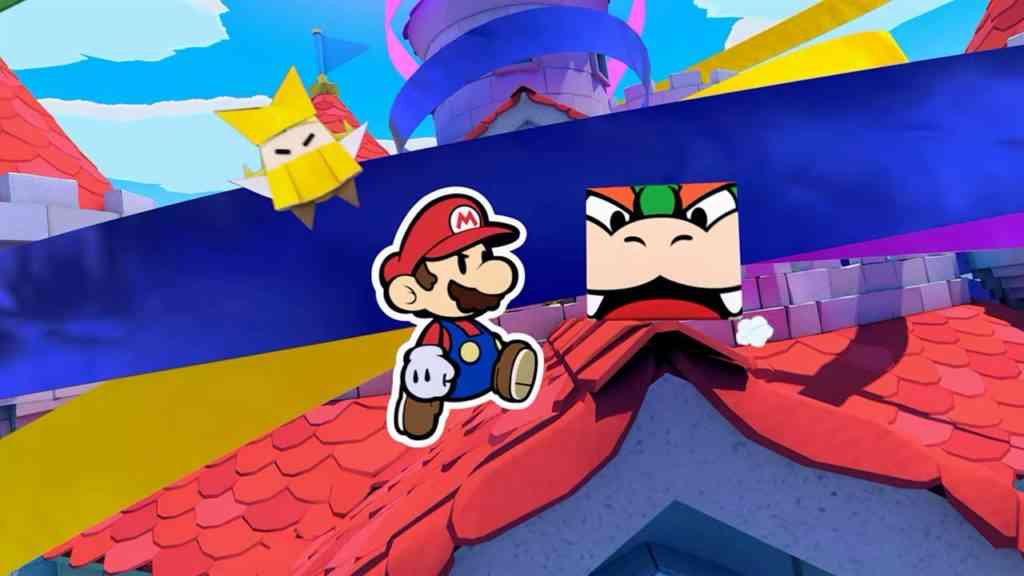 Beating down on folded soldiers is fun and all, but the real pride of the combat system shines in boss battles. Whether you’re taking down one of the themed villains, like a giant rubber band man or a mean case of pencil crayons, or one of the Vellumentals that hold powers needed to progress – it’s fantastically fun, challenging, and rewarding at the same time. All of these confrontations will somehow change the combat formula you’re used to, forcing you to adapt and think on the fly. I routinely found myself in a war of attrition against whichever area’s ‘Big Bad’ I was up against. And right until the credits rolled, it was ultimately satisfying to wear down and topple a seemingly insurmountable foe. Most memorable, though, was just how different each encounter felt. The distinctiveness of each boss is commendable, and while some may be put off by the simplicity of their design, they serve the storyline precisely as needed.

That’s not to say taking on a boss won’t come without its frustrations. Limitations in the battle system become apparent once you start to deep-dive into it. There are moments when you’ll need to defeat an enemy, or hit a switch to open up the ability to use a Vellumental power. But after doing so, the game will force you to use this move, even if it may be a complete waste of an attack. Other minor annoyances like this will pop up now and then, and I’ll admit I’m nitpicking. But Intelligent Systems have done such a terrific job with nearly every aspect of the world – levels, enemies, dialogue, character building, a new combat system – and it’s exactly what I wanted out of Paper Mario. So it makes it difficult to not pay attention to anything that hinders the player.

There are no paper cuts in store for you here. Paper Mario: The Origami King is as smooth as butter. I expected an epic journey as the franchise has provided in the past, but I had no clue I would fall in love with this game as much as I have. If you’re a Switch owner, you can’t miss it. And if you’ve been on the fence about purchasing one, The Origami King proves the grass really is greener on the other side. Nintendo and Intelligent Systems hooked Paper Mario up to the defibrillator, delivered 3000 volts to his chest, and now I’m here to tell you – Our boy is gonna live! 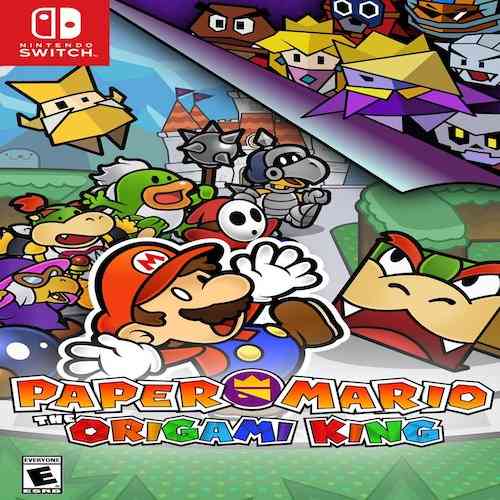