When I was a whole lot younger (seriously, A LOT younger) I was the proud owner of my own BMX bike that I thought made me invincible. Performing wheelies, jumping off ramps and letting friends ride around on the back pegs were some the coolest things you could do as a kid. One fateful day I thought it would be a great idea to ride my bike down a set of stairs and surprisingly it was going really well until I hit a step with a huge chunk missing from it. Finding myself flying over the handlebars I deftly saved myself from hitting the ground hard by stopping myself with my chin. If you were ever to see me in person you can still see the scar from this feat of daring( or stupidity according to my father). With my minor injuries I was laid up for a bit resulting in me getting to play some video games which just so happened to be a NES. In a way you can say my BMX bike led me to my passion for video games and I haven’t looked back since. Now we have this mobile gone console title, Pumped BMX+ making a change in their life so let’s find out if it was a good choice or not.

First and foremost people will attempt to draw comparisons between Pumped BMX+ and RedLynx/Ubisoft’s Trials series. The bottom line is that while their might be some similarities you just can’t expect a mobile port to stack up to a game developed expressly for the console/PC market, especially graphically. However, as the graphics are based on a mobile platform you get more of a cartoon style that I must say has been upgraded well to the console version. There is a bit of customization where you can change the colors and style of your clothing and bike to add a little bit of your personality but these are all from pre-set looks made by the developer.

“Pumped BMX+ has its roots in mobile gaming and this comes through clearly as the levels are completed quickly and are meant to be played in short periods of time, which unfortunately doesn’t work all that well on consoles.”

Musically this title drove me bonkers to the point where I started to play the game on mute. It suffers from being monotonous and not even something I would pair up with a BMX or extreme sports type of game. When I thought of the possible music for this game I thought of games like Tony Hawk or SSX. Sadly, this title seems to have had the music plugged in just to have it there. Again, we’re talking about a port here so as much as I would have liked to see a little more diversity in the sound department you just can’t expect a game like this to have a licensed soundtrack.

Jumping into the tutorial you start learning the basics of how to flip, spin, grind and do manuals from basic versions to more extreme tricks. The tutorial and the courses adjust and keep on adding new ways for you to learn new tricks . There are objectives for each level, most of which are ‘achieve a trick point total’ or ‘do a X amount score trick’. Those are pretty simple but there is always a trick that you must perform on each course for each of the three difficulties. Not only do you have several courses to play through you also have Easy, Medium and Hard Difficulty objectives to complete as you progress through the game. The more objectives you achieve the more courses you unlock. 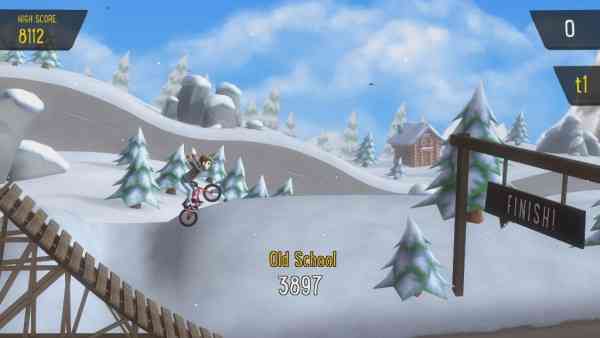 Control wise, this game is a bit tricky at first as you get used to the fine controls. Once you get a grasp on them thought, you can perform some crazy trick combinations to bust out the top scores. You can easily access all tricks in the menu but the game gets repetitive and boring really quick. As we’ve established, PB+ has its roots in mobile gaming and this comes through clearly as the levels are completed quickly and are meant to be played in short periods of time which unfortunately doesn’t work all that well on consoles.

Pumped BMX+ is a sharp looking title with controls that are some of the best for this genre after you get through the learning curve. However, we have a lackluster soundtrack and repetitive game play that perhaps should have branched out into something new rather than keep the mold of short game play experiences on mobile devices.