Prison Tycoon: Under New Management Review – No Chance at Rehabilitation

Quick, name three things you associate with prisons. If you thought “colorful,” “light-hearted” and “whacky” then I have a game for you called Prison Tycoon: Under New Management. When you come down from whatever trip you’re on that makes you think incarceration is fun, check it out.

Prison Tycoon: Under New Management feels less like Prison Architect and more like The Sims Go to Prison. It’s a building and economic sim where you run a for-profit private prison. It sidesteps the thorny ethical issues around for-profit prisons by emphasizing rehabilitation. Your jail doesn’t punish people, you see. It uses a variety of therapies to help them. Although your sneaky-Pete prisoners might try to escape now and then, your prison is usually a pretty violence-free zone.

If You Build It, They Will Come

Unlike some building sims, Prison Tycoon: Under New Management only has one game mode. You start by selecting from five biomes in which to build your prison. Each biome has perks and disadvantages. For example, building in the tundra helps preserve food. Building in the haunted swamp makes it harder to hire staff.  As a side note, each biome also has a style of music that will become maddeningly repetitious. You’ll be turning the music down or off very quickly.

It isn’t like the biome influences the architecture, however. Your prison will look the same no matter where you build it. 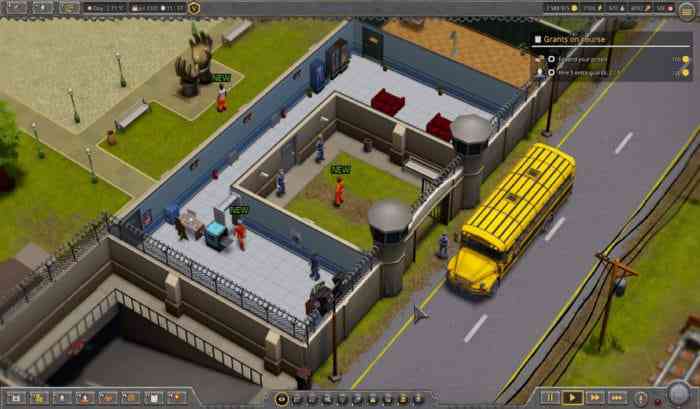 You begin by building an empty structure, which you fill with different rooms like prison cells, therapy rooms, dining rooms and the like. For each type of room, you need to hire staff, like guards, therapists, cooks and custodians. If you’ve played any kind of building sim, you can probably figure out the flow. You’ll pretty quickly run out of room and buy the empty lot next door.

There is no story or tutorial. Instead, you complete a series of “grants,” which is the game’s name for objectives and instructions rolled into one. As you complete objectives, you move through a series of tiers. Each tier unlocks new types of rooms and decorative items. For example, you start with a therapy room that’s just a couch and a desk. Pretty soon you can build therapy rooms based on reading, art, and even VR. You need all these therapies because each prisoner responds to a different type, based on whatever psychological issue they have. You know, instead of murder, your prisoners are there due to “anger management” issues.

Like in most sim and building games, your goals are to expand, make money, and to keep the prisoners and staff happy. If they’re cold, you need drop-in heaters. Or build showers. You need to build rec yards and visitor rooms. Sometimes, all it takes to rehabilitate a prisoner is a single session on the couch. Even so, they will have to serve out their entire sentence. 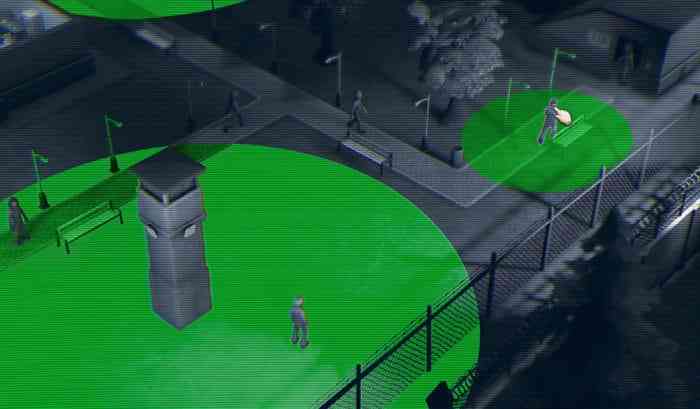 A game of Prison Tycoon: Under New Management seems to have three phases. In the first phase, you’re just laying down the basics and there are only a handful of prisoners. You’re not worrying much about money. In the middle game, you have more prisoners but you’re also able to balance all the tasks. In the last part of the game, things go to hell for one reason or another, often a lack of custodians. You’re way too deep in debt to dig out. In many sim games this kind of chaos is fun because the characters and AI have a lot of quirks and personality. Not so much in Prison Tycoon: Under New Management.

What’s the Opposite of Creative?

Construction and prison design are two of the core activities in Prison Tycoon: Under New Management. Unfortunately, these aspects of the game are both simplistic and dull. It’s easy to plop down buildings and rooms, but there’s almost no creativity around any of it. Rooms have to be a specific size and shape. They have to contain set elements to be functional. The result is every prison you build has essentially the same look as every other. The fun of making a unique space is entirely absent because all you’re doing is checking off tasks. While I guess its admirable that Prison Tycoon: Under New Management views rehabilitation as the goal of prison, its treatment of mental illness is insultingly superficial and unrealistic.

Equally unrealistic is the game’s approach to power, water, and food. You just order them from a menu. It’s a little weird. The rooms also need access to electricity but it doesn’t seem to matter how convoluted the connection to the grid is. I’m not sure why the game even bothers with this mechanic.

Prison Tycoon: Under New Management has a colorful and cartoony look. I guess it’s maybe going for irony, given the subject matter. There’s also almost no personality in the Sim-like characters. With the exception of being able to record your own prison PA announcements, sound design is minimal, and as noted, the music is perky but repetitive. 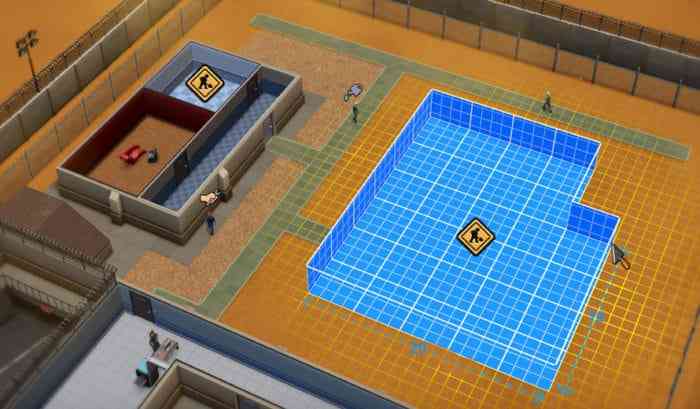 Prison Tycoon: Under New Management checks off the basics of a building and sim game. There’s even some low-key, pleasant, mindless fun to be had for a while. Pretty quickly, though, the game’s absence of creativity and simplistic approach start to overshadow the experience. The lack of a real story or more than one mode further restricts the game’s depth and longevity. It’s not that prison games have to be about violence and punishment but in a sim, drama or interesting incident have to come from somewhere. Ideally, it’s from giving the player the tools to create it or emergent systems that allow it. Prison Tycoon: Under New Management locks them up.