2015’s Pillars of Eternity was a love letter to games like Baldur’s Gate and Icewind Dale, and it turned out to be one of the first in the new wave of cRPG games that players are enjoying now. However, the once sparse market of modern cRPG-style games is now filled with competitors such as Torment: Tides of Numenera, the Divinity series, and Obsidian’s own Tyranny. Because I had not personally enjoyed Pillars of Eternity as much as I hoped, I was slightly concerned for its sequel, especially as the nostalgia card has now been thoroughly expanded. But rather than sinking under the wave of the new cRPG renaissance that its predecessor helped usher in, Pillars of Eternity II: Deadfire soars, improving on nearly every aspect of the first game — from its world and storytelling to its combat and gameplay mechanics.

Put Down Your Sword and Take Up Your Cutlass

In Pillars II, we return as the Watcher, who finds themselves caught up in another world-shattering conflict of gods and souls five years later. As this is a direct sequel, you can import your save file from Pillars I or piece together your memories through a short quiz, Mass Effect-style. The game opens with an electrifying introduction — we see an old god awaken beneath our hero’s home, destroying it to begin a rampage across the Deadfire Archipelago. As expected from Obsidian, Pillars of Eternity II has some exceptional writing, from its evocative and creative character descriptions to its memorable flavor text that fleshes out the game’s world. In this game, knights and castles have been swapped out for pirates and the high seas. While the main quest is rather straightforward, the lush world of Deadfire makes Pillars II an easy game to become immersed in through its sidequests. You end up wanting to talk to everyone you come across to hear their story and figure out the interlocking geopolitics of this ocean society, standing in such stark contrast with the more standard fantasy locale of Pillars I.

Alongside from its setting, Pillars of Eternity  II improves in almost every way upon the already celebrated Pillars I, from the obvious, such as improved graphics and increased voiceovers, to the details, like better stealth mechanics and a new day-night system. As with the first game, your party automatically fights with customizable AI, and you can pause at any time during combat to issue orders yourself as well. With the party size pared down from Pillars I‘s six to five, multiclassing is introduced in case you need to fill in composition gaps. For example, returning companion Edér can be set as his old class (Fighter), switch to a Rogue, or be multi-classed into a blend of the two as a Swashbuckler. Obsidian has managed to make Pillars’ class-based gameplay more complex while actually increasing its accessibility from the first game; multiclassing is optional (and not actually recommended for new players), and there are clearer tutorials and explanations of abilities. In general, combat remains similar to the first, with many returning spells and skills. However, Pillars II improves upon its predecessor’s combat with a better party and enemy AI, increased automatic skill usage and a new retargeting system, making for smoother play. 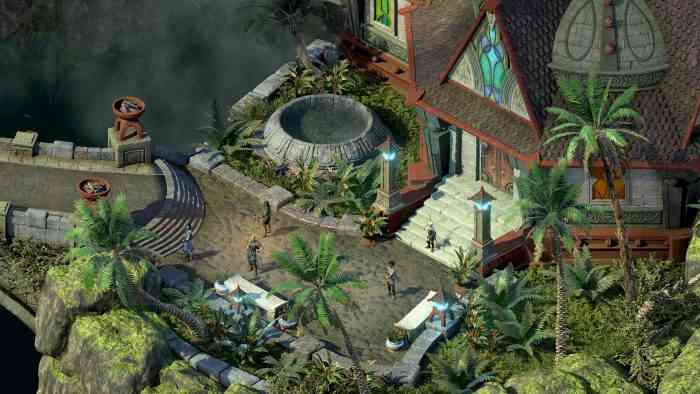 There are far less filler combat encounters and empty areas to trek through, a huge improvement as fighting does not guarantee you experience in Pillars to make stealth-based playthroughs viable, which made the random skeletons and beetles that attacked your party as you made your way across an almost barren field to the next town rather annoying in the first game. Pillars of Eternity II changes it up with a navigable world map, bringing strong Civilization vibes as I moved my character marker to pick up some resources I spotted. Mini text-based sidequests popped up as I clicked around the map — simple events where I chose whether to help a group with a stuck wagon or how to confront a Druid blocking my path. These light interactions did far more to engage me in the game’s world than constant hostile encounters with wildlife.

As the game takes place in an archipelago, sailing and ship combat have been integrated to the game, complementing Pillars’ usual combat. Sailing functions much like the world map exploration, with the combat manifesting as a turn-based text-adventure. It is a simple interface and surprisingly engaging as you issue out orders, see how they play out and how the enemy responds, and you adapt your strategy as you go. And if this isn’t to your liking, you can sail straight at the enemy and board their ship to fight them with Pillars II‘s standard party-based combat.

The combat of Pillars of Eternity II isn’t the most tactical or complex out there in the world of contemporary cRPG-style games — that crown would go to Divinity: Original Sin II — but I would argue that it doesn’t need to be. In Pillars of Eternity II, combat ultimately takes a backseat to the lush world that is yours to explore and the story you are to take part in. There is a multitude of backgrounds, talents, and dispositions to customize your character to and shape your roleplaying experience. With the new companion system, your friends (new faces and those returning) each have their own preferences, reacting to your decisions and even to each other. They feel more like their own people rather than your silent followers, especially as the lighthearted Edér and Xoti often laugh behind the more serious Aloth’s back as you are speaking with him. 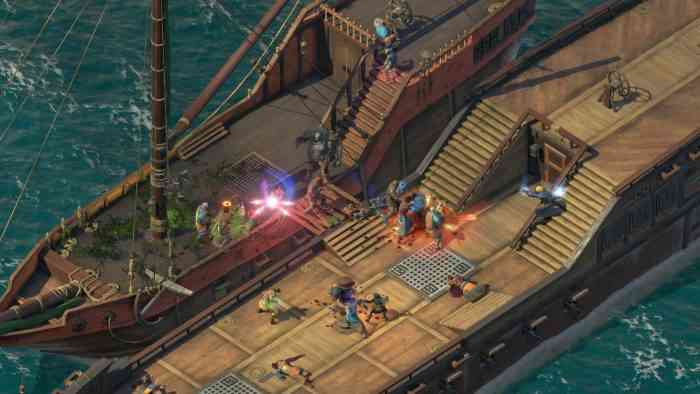 Visually, the most remarkable accomplishment Pillars of Eternity II pulls off is making its world feel dynamic and alive. While Pillars I featured flat, rather bland backgrounds that the characters moved over, Pillars II‘s moving waters, lamplit cities, and skilled use of verticality makes Deadfire feel substantial and responsive. The setting is imaginative and the towns detailed, with luminous aura adorning the doorways of bathhouses, fireflies floating around a governor’s harbor-side estate, and the roots of trees crawling like ivy over a temple on the cliffs. Both on land and sailing through the islands, you navigate through sunny days and rainstorms, with the day-night cycle affecting the behavior of NPCs. Random passersby are fully voiced, and many are gossiping with each other about faction rivalries, the state of the world, or their own lot in life. Despite many lacking names, it is believable that all these NPCs are living their own lives, separate from the Watcher’s quest due to the game’s excellent writing and voice acting. All text is read out in Pillars II, and the high-quality voice acting elevates the game to a level of player engagement far above its predecessor. Overhearing a tidbit about the world — for example, that one shady trading company is suspicious of another one, or that there’s a secret black market somewhere around town — makes the worldbuilding more organic than an exposition dump, doing wonders for immersion and informing player decisions.

While the game does a better job at easing you into its combat and systems, it can still get overwhelming at times, especially for new players to the cRPG genre. There are many locations, factions, and characters as Pillars of Eternity II is a bigger and deeper game than its predecessor, and referencing the journal is a must to keep track of it all. But because of this, Pillars of Eternity II feels like a living, breathing, complex world. There are many layers to this game, with different people who have their own problems and motives. You can pick and choose where to get involved, or happily give dozens of hours of your life to speaking with all the colorful characters of Deadfire, finding every hidden area, picking up every abandoned cat, and completing every quest Obsidian’s latest triumph has to offer.