The beloved Pikmin franchise is once again back in the spotlight, with yet another remaster. Previously, Pikmin 1 and 2, originally available on the Nintendo GameCube, were re-released on the immensely popular Wii console. Now, Pikmin 3, which was original released on the poorly marketed Wii U, is getting a remaster on Nintendo’s latest console, the Nintendo Switch, in the form of Pikmin 3 Deluxe. As a fan of the Pikmin franchise, I’m very excited that more people will get another chance at playing such a great game, but I can’t help be being a little disappointed that Nintendo didn’t opt to deliver all three Pikmin games in one convenient package. It’s not like the first two Pikmin games are readily available. At any rate, here we are with yet another Wii U gem getting some much-deserved love. If you’re a fan of the Pikmin series, I’m sure you’ve already plucked this gem off the store shelves. However, if you’re new to the franchise, let me share just how amazing this real-time strategy game is. 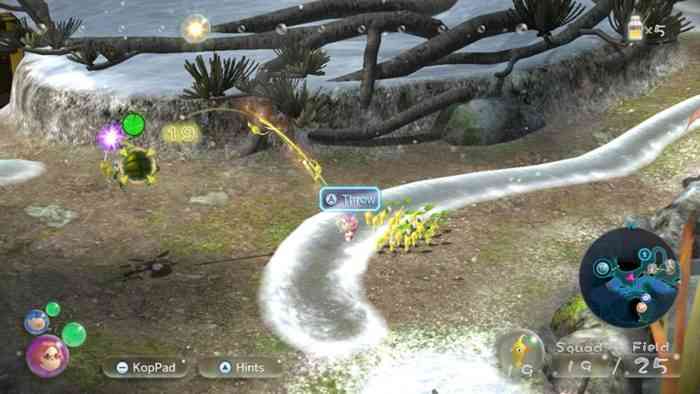 Pikmin 3 Deluxe revolves around an intrepid crew of three explorers in search of food to save their home planet Koppai. Their journey takes them to the strange new world PNF-404. As soon as they arrive, their ship, the S.S. Drake suffers a malfunction and they crash, separating the crew. With the help of the adorable and helpful Pikmin, the explorers will get reunited, repair their ship, and finish their mission. Ideally, Pikmin 3 is most enjoyable if you’ve already played the first two Pikmin games, as there are some story elements that carry over. However, if Pikmin 3 Deluxe is your first Pikmin experience, the game does a good job ensuring you won’t be completely lost, both in terms of gameplay and story.

Pikmin 3 Deluxe is a real-time strategy game. You’ll control each of the three explorers and utilize each of the five different types of Pikmin to find fruit and parts for your ship. Each type of Pikmin has their own special abilities. For example, the Rock Pikmin, can smash through glass, opening new pathways. The Yellow Pikmin are quite light, so they can be thrown farther distances. And the Blue Pikmin can survive under water. While the game is essentially linear, there are many areas where you’ll be able to pick-and-choose which path you want to explore. Each level has a starting point, where you’ll find the S.S. Drake and the Pikmin’s home, or Onion. Your Pikmin will deliver any collected fruit and items back to this starting. Your three explorers can only direct and throw Pikmin, they can not carry or attack anything.

While the game is by no means easy, it does an excellent job of showing you the ropes in a slow and steady way. You’ll also find plenty of hints throughout the world to give you an idea of what you should be doing. Each day is a race against the clock, from sunrise to sunset to accomplish as much as possible. At the end of the day, your team need to consume one vial of juice to carry on – so you’ll definitely need to ensure you find fruit each in-game day. Each in-game day lasts approximately 15 real-time minutes, perfect for quick gaming sessions. Keep in mind, you can’t save mid-way through a day, so once you start, you have to commit, or you’ll be starting the day over again.

The game’s visuals don’t appear to have received much of an upgrade from the Wii U version. There are still many moments when the game really shines, but you’ll likely notice it gets a bit rough around the edges when characters are up close. Fortunately, since for most of the game, your perspective is from a distance, everything will look great. Make no mistake, this game still look great, just don’t expect this to be a full remaster in the usual sense of the word. Compared to the Wii U version, there are some minor updates to accommodate the different controllers. Additionally, in the original game, when you locked on-to an object or enemy, the screen turned into a sort of heads-up display that gave the objects name. In the Switch version, this is omitted. It’s not a huge omission, but worth noting.

The Pikmin are truly the stars of this game. This franchise is a masterclass on how to design characters in a real-time strategy game. Every detail is both creative and useful. Blowing your whistle will get their attention – and if it’s just a short burst and they’re busy, they’ll briefly stop what they’re doing as if to say “was that on-purpose or just a mistake?”, if they don’t hear a second whistle, they’ll carry on with their task. When they’re in large groups, carrying items back to their Onion, you’ll often hear them humming a tune in unison. When they’re asked to fight, they’ll dive right into danger – doing exactly what you ask – even if it leads to their doom. When a Pikmin dies, a little ghost exits their body into nothingness as they utter their final little cry. Sometimes it’s hard not to get attached to these cute little guys, and feel a pang of sadness when a careless mistake leads to their death.

The Switch version comes with a number of new additions that will help entice previous Pikmin 3 players, while also giving more reasons for new players to jump in. The first is the added difficulty options. Unlike the original, Pikmin 3 Deluxe offers three difficulty settings; Normal, Hard, and Ultra Spicy. Normal is easier than the original Wii U version, Hard is the same difficulty as the Wii U version, and Ultra Spicy turns the heat up to really challenge Pikmin players. Under Normal and Hard difficulties, you can control up-to 100 Pikmin at a time, in Ultra Spicy, you’re limited to only 60 Pikmin at a time. In addition, fruit collected are worth half as much in Ultra Spicy compared to the other difficulty settings. And finally, the Ultra Spicy mode reduces the amount of real-time each day is. One other addition worth mentioning is an in-game achievement system, perfect for Pikmin players who want to really push their abilities.

Plucking With Someone Else

Another fantastic addition and probably the number one reason for existing Pikmin 3 players to warrant purchasing Deluxe is the brand new co-op mode. The entire game, from start to finish, is playable via split-screen co-op. Since the game is ultimately about managing your Pikmin in real time, having an extra set of hands leading their own group of Pikmin to accomplish tasks definitely helps make things run more smoothly. Of course, you’re still limited to the amount of Pikmin available, so in Normal or Hard settings, you’re still limited to 100 Pikmin total. Communication will also be key here – remember, your local co-op partner can’t read your mind! Unfortunately, there are no online modes in Pikmin 3 Deluxe. There are some online leaderboards linked to the Pikmin 3 missions, including the brand new missions specially made for Pikmin 3 Deluxe. 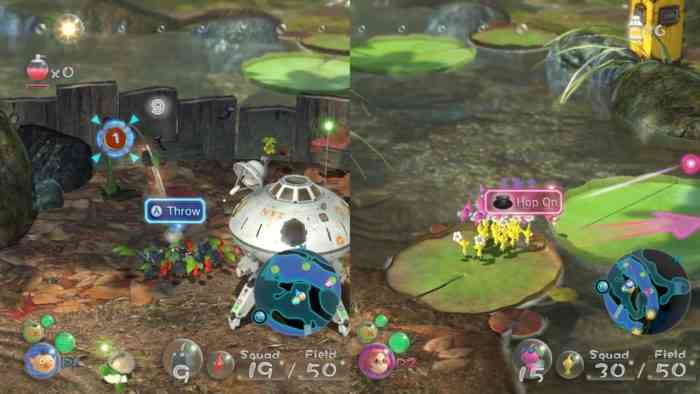 Pikmin 3 Deluxe offers the most complete version of Pikmin 3 that fans could hope for. If you’ve previously enjoyed Pikmin 3 on the Wii U, there isn’t a ton of reasons to come back, except for a handful of new bonus missions, added difficulty options, achievements, and the ability to play the entire game via local co-op. Make no mistake, Pikmin 3 Deluxe is an absolutely brilliant game, and everyone who owns a Switch owes it to themselves to experience it first hand. Pikmin games are a truly unique and pleasurable experience unlike any other real-time strategy on the market. Still not convinced? Nintendo has a Pikmin 3 Deluxe demo available on the eShop and your progress will carry over to the full version. However, it is worth reiterating that I really wish Nintendo took the extra step to include both Pikmin 1 and 2 in this package. The entire series should be available for everyone to enjoy. With that said, don’t sleep on Pikmin 3 Deluxe, it’s a plucking good time and just enough to tide us over as we continue the long wait for Pikmin 4. 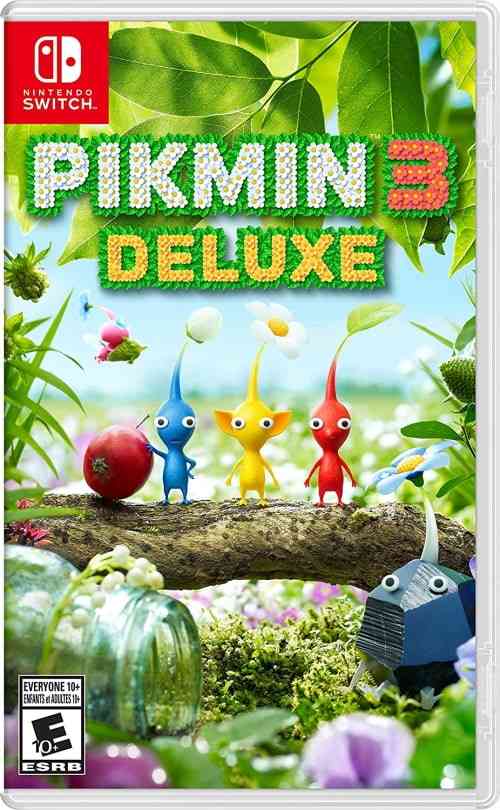