Remember Your Swing. Strike the Ball. Don’t Hold Nothin’ Back.

It’s hard to believe that we’re over five years removed from the Rory Mcllroy PGA Tour debacle. In what was a catastrophic failure, the last golf game EA Sports produced nearly sank the genre. Most frustrating for the dedicated Tiger Woods’ loyalists was that for all the experience EA had accumulated over more than a decade of making golf simulations, Mcllroy’s PGA Tour was simply a poor representation of the sport.

But since 2018, HB Studios has been producing a quaint, if not rough-around-the-edges, golf experience in ‘The Golf Club.’ And while the several editions that have been released to date haven’t exactly been able to scratch that Tiger Woods’ itch that has pestered fans since the late 2000s, 2K games is looking to remedy that. Stepping in, taking the bull by the horns, and rebranding ‘The Golf Club’ as the new PGA Tour 2K series is an exciting move for a generally starved fanbase. The prospect of seeing a sport I love – a sport that ends up on the back-burner when up against leagues like the MLB or the NFL – receive that 2K AAA treatment, has my mind utterly blown.

So it’s unfortunate, then, that PGA Tour 2K21 will stand as nothing more than an homage to future potential. This game was never able to become the hole-in-one we wanted it to be.

Golf is a beautiful sport. The breathtaking, serene nature of world-renowned fairways like Augusta National, Pine Valley, or Cypress Point is something you can only really understand once you’ve walked their grounds. But that’s why we play video games – to experience something that’s otherwise impossible to be part of. PGA Tour 2K21 fails to capture the unique beauty that golf offers. Don’t get me wrong – it doesn’t look terrible. But of the fifteen courses on tap, none of them present any better than golf games of the early 2010s. Assets are bland, with most textures lacking the sort of detail you would expect from a modern-day title. Lighting is serviceable, and some pleasant shadow effects add to the overall feel. But having things well lit almost works against HB Studios here, as it illuminates the rest of PGA Tour 2K21’s shortcomings. Character models are laughably terrifying, with crowds, in particular, looking insultingly bad. Each of the officially licensed professionals is more stiff and awkward than the last. Seeing a plastic, wide-eyed Jim Furyk, hit me with the finger guns after a 37-foot putt will haunt me forever.

Headed for the Rough Stuff

I can put up with lousy visuals in any sports simulation, though, as long as the emotion of the game is appropriately depicted. But this is another aspect that PGA Tour 2K21 misses the mark on. Fans in attendance react (somewhat) correctly to each of your shots, but so much else of what makes for high stakes is entirely absent. Winning feels anticlimactic because victory equates to nothing more than receiving a picture of a trophy. Seriously, you barely even celebrate after sinking the 18th. Commentary is irritatingly hit or miss, and will often fail to build up the thrill of making a clutch birdie, or the agony of a devastating bogey. 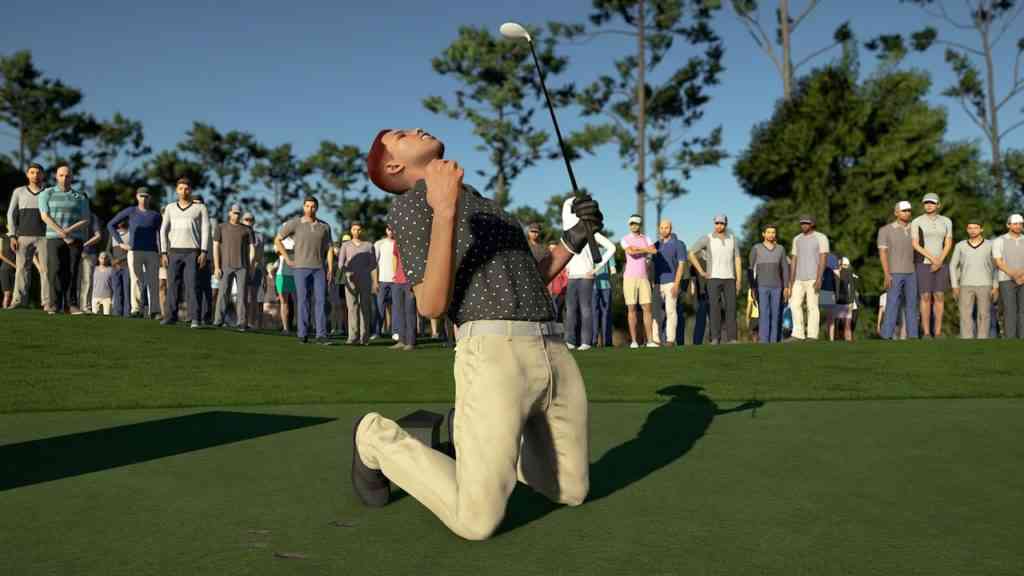 On top of that, routine audio bugs will occur, completely pulling you out of your suspension of disbelief. I’ll admit, there are brilliant moments between the commentary team of Rich Beem and Luke Elvy, like when the two are bantering back and forth about an upcoming charity event. But the contextual commentary is severely handicapped. Most of the time, it will boil down to vague, purposeless statements like, “This player is having a great day!”

You probably would agree that a golf game’s glitz and glamour are secondary to how it plays. Although HB Studios has a long way to go in the presentation department, it’s undeniable that they’ve captured much of the satisfaction that comes with nailing your shots. Driving, approaching, chipping, and putting all feel fantastic and accurately replicate the excitement of adequately assessing, for example, a difficult par-5. I can’t remember the last time I had this much fun bettering my game and seeing genuine improvement through nothing more than applied knowledge. Sure, there are club upgrades that can provide slight differences to things like power or accuracy. But these never felt like they were making any real, tangible difference. PGA Tour 2K21 can be completely unforgiving. It takes time to get good. So when I finished my second round at TPC Boston with three fewer strokes than the first time through, I knew it was because I was simply a better golfer. And that’s immensely satisfying.

HB Studios have built themselves an incredibly solid foundation to further develop the series upon. And while that’s thanks in large part to the gameplay, a huge selling point of the 2K golf series, moving forward, will be the course creator. Putting these tools in the community’s hands, pumping user-created lifeblood into the heart of your game? Brilliant, a stroke of genius. But in addition to that, the execution is tremendous. Once you’re in deep – placing trees, creating hazards, shaping greens – you realize just how powerful the creation tool is. This is by far the most exciting part of PGA Tour 2K21, and I can’t wait to see what other players come up with. 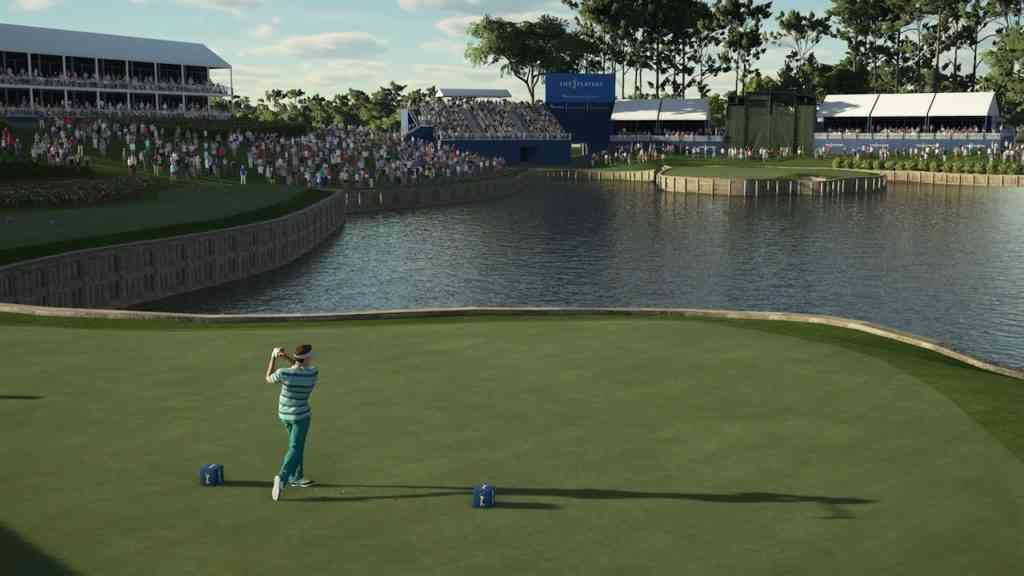 Now, it’s true that I’ve been having fun perfecting my game and building the course of my dreams. But I’d be remiss if I didn’t mention that there’s also something weighing on my mind, something that has me… trepidatious about playing PGA Tour 2K21. After close to twenty-hours into my career, I was hit with a debilitating, game-breaking bug for no rhyme or reason. To my astonishment, the backswing stopped working, almost entirely. Across every mode. Be warned, don’t get too attached to your data, because the solution was to delete my file and start fresh. I can’t act like this, piled atop the mostly lame commentary, audio bugs, severe presentation woes, and barebones campaign, didn’t bury nearly every bit of enjoyment I was getting out of the game.

In between some of the most frustrating moments I’ve had with any sort of game in quite some time, PGA Tour 2K21 flashed with hopeful, brilliant optimism. As long as it worked, hitting the links and knocking down a few holes felt as good as it ever has. And the course creator is one of the best things I’ve seen come to a sports game in a long time. But it’s hard to recommend something that chewed up and spit out nearly a day of my life, leaving me with nothing to show for it. Either way, it’s without question that the newly invigorated, and now former, Golf Club series is sitting at the base of a mountain made from potential. Though, it may be a hell of a climb getting to the peak. 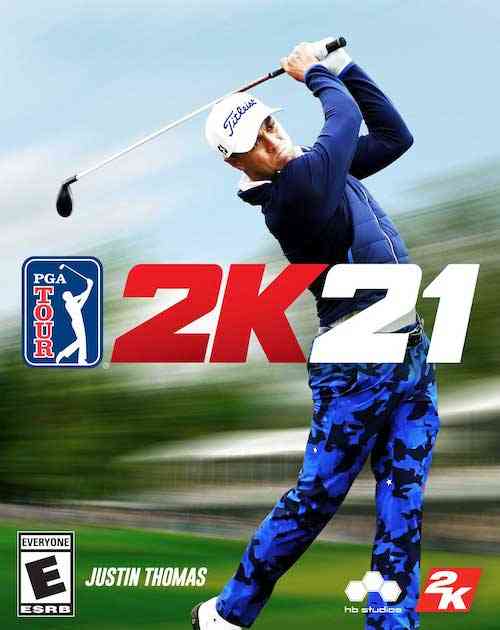