Persona 4 Golden brings the series‘ first smash hit to modern consoles and it’s a treat. If you enjoyed Persona 5, you’ll probably love this title. It’s easily the closest to its more popular successor in look, feel, and mechanics. Persona 4 Golden is in many ways a gentler story than Persona 5, but it could also be called a more grounded one. Whatever the case, Persona 4 changed the course of the Shin Megami Tensei franchise, and I can see why.

In this game, you take on the role of a transfer student who’s just arrived in the small town of Inaba. You’re soon figuratively pulled into a supernatural murder mystery and literally pulled into a fog-filled world inside the TV. The mysterious Midnight Channel is said to show your soulmate, but in truth, it shows people who are being pushed into the TV World. There, the victims are killed by Shadows–the manifestation of an individual’s repressed negative traits and beliefs–and their bodies reappear in the real world.

Only by clearing a symbolic dungeon and facing your Shadow can you awaken both your Persona and the power to live as your true self. Together with a group of other students and a chatty mascot named Teddie, you set out to solve the murders. And maybe while you’re at it, you can all figure out what to do with your lives.

In Persona 4 Golden, you have the run of an entire small town instead of a single island or a sprawling section of Tokyo. Inaba is tiny and often cramped, but full of personality. Its rustic settings feel like they were taken from a real town. The charming environment design and clever camera angles make for a sense of ageless appeal. This is important because the in-game 3D graphics have not aged terribly well. Fortunately, the character portraits are still lovely and this game does feature some excellent animated cutscenes. 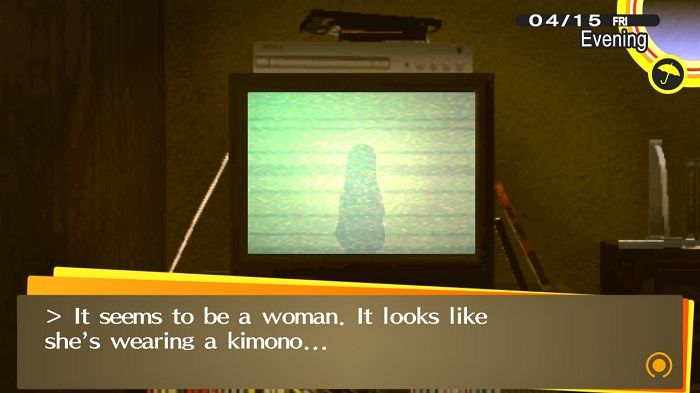 The game’s soundscape is excellent. It switches from an eerie ambiance to the bustle of everyday life in moments. The soundtrack is great, too, especially the battle themes. Beyond that, the TV World’s surreal nature lends itself to some incredibly stylized imagery. And while the monster designs aren’t as striking as the ones in Persona 3 Portable, they’re still memorable. There’s no second protagonist to unlock in this game, unlike in Persona 3 Portable. However, a second playthrough lets you use new dialog options and adds other forms of replay value.

Most of the choices that made Persona 5 great began in Persona 4 and Persona 4 Golden. However, this also applies to Persona 5’s more divisive aspects. Persona 4 Golden distanced itself from the franchise’s horror roots and put more focus on teenage life. While the Shadows themselves are still uncanny, they’re scary because they can break the characters down with words alone. If you like this focus on identity and mystery, you’ll love this title.

Persona 4 Golden is a Charming Coming of Age Story

Persona 4 Golden is a much more straightforward coming-of-age story than Persona 5. The protagonist isn’t on probation, but he is judged for being an out-of-towner. Nanako’s mother’s death didn’t drive her to become a shut-in, but it did lead to her family drifting apart. Megastore Junes is driving the smaller family-owned stores out of business. This creates some serious tension between the manager’s son, Yosuke, and everyone else at school. Yukiko and Rise struggle with career expectations. Chie and Kanji grapple with self-image issues. And Naoto and Teddie don’t know who they are yet. 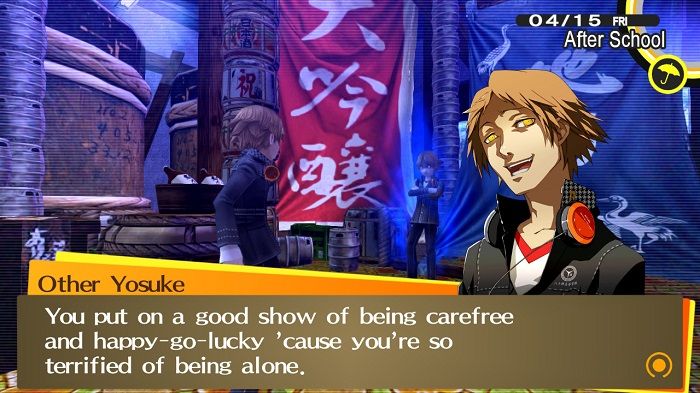 If Persona 5 was a game about angry teenagers fighting corruption, then Persona 4 Golden is about lonely teenagers supporting each other. The party feels like a genuine group of friends. It’s really fun to see them bounce off each other, share their worries, and grow closer. And while it’s never as tense as Persona 3, there is an overarching theme to the characters in this game as well. In one way or another, everyone is worried about their futures. This universal struggle makes Persona 4 Golden timeless.

Once again, the game’s story progression is tied to its calendar system. However, its pacing moves quickly, especially at the beginning. This makes it a lot easier to dive right into Persona 4 Golden than its predecessor or its successor. Social Links also make a return. There’s some leniency built into the schedule this time, so you aren’t under quite as much pressure as you are in Persona 3 Portable. Also, you can Social Link a fox. Combat features the standard Persona set-up of magic, physical attacks, and hammering on enemy weaknesses for extra turns.

You Don’t Look So Good

While Persona 4 Golden’s visual design is great, the in-game graphics have not aged terribly well. At least the character portraits are still lovely and this game does feature some excellent animated cutscenes. The soundscape is much better than in Persona 3 Portable and the voice acting is quite solid. But if Teddie’s voice still gets on your nerves, you can switch on the Japanese voice acting instead.

The game offers five difficulty levels ranging from Very Easy to Very Hard, which explicitly asks if you hate yourself. You can change the difficulty from the system menu. It also features some genuinely funny and sometimes heartwrenching writing. Unsurprisingly, a game about high school students figuring out who they are and who they want to be has a lot of interpersonal conflict. 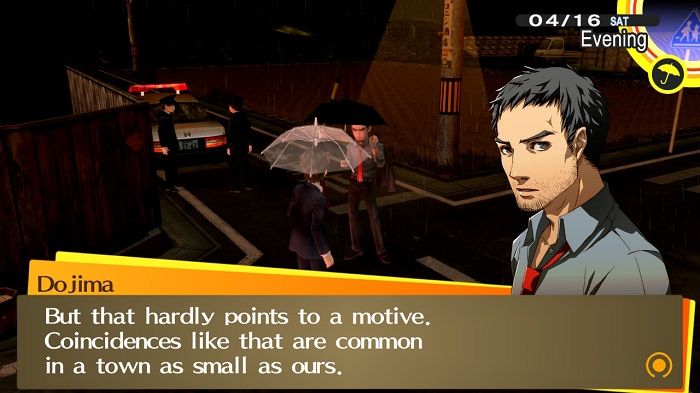 The Investigation Team never gets as dysfunctional as Persona 3’s S.E.E.S., but there are still a lot of shenanigans to go around. However, some of the writing choices were questionable for international audiences even back in 2008. Persona 4 Golden needs to learn that you can’t criticize something–the objectification of teenage girls, for example–and then exploit it without having the critique fall a bit flat.

Persona 4 Golden is not a perfect game. Some of the choices made during social links come off as a little questionable for international audiences. And the graphics are nearly as dated as Persona 3 Portable’s. However, it’s still an iconic game that brought the JRPG formula firmly into the modern day. It’s not my favorite Persona game, but I can firmly recommend it to just about anyone. If you have a Switch, now’s your excuse to play Persona 4 Golden. 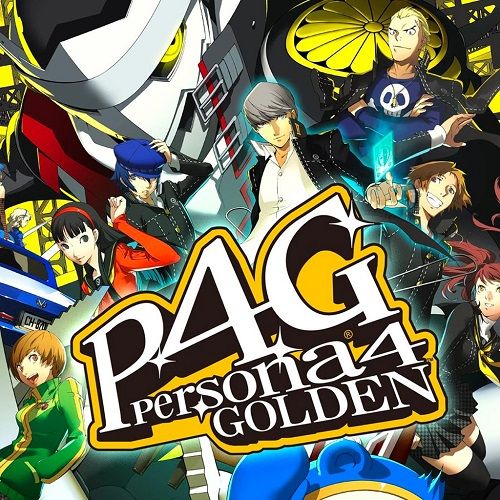