Pacer is a game with a laser focus on the fans. The fans are those of us who love zero-gravity racing in the vein of Wipeout. Some members of the original Wipeout team even rolled up their sleeves on this title, so if you’ve ever raced in the future with no gravity, you’ll know what you’re getting into.

For the uninitiated, Pacer is a game where you race space-like ships that hover just above the track at blazing speeds. Tracks are designed for maximum velocity and tight turns where you can overtake an opponent through careful use of airbrakes. Using these brakes lets you take turns tighter and also charges your boost (fans of the KERS system will be familiar here). When it works, it’s a wonderful feeling. But Pacer’s poor track design limits this euphoria to brief moments, and I found my time with it mostly frustrating.

In a typical race, you glide to maximum speed, carefully lining up your racer with the speed boost or item powerups on the tracks. You’ll accelerate while dodging or firing upon your opponents. There are moments of bliss, as a track tapers straight and you gather more and more speed, you’ll understand why people love these types of racers so much. Your dreams will be dashed, however, as the turns, even on the most well-equipped ships in a lower CC bracket, are often too tight, leading to unnecessary collisions against the either guardrail. It could be a matter of ‘get gud’ but even modifying my ship for the best handling and being nimble with my controller, I still mashed into each turn like a clodhopper as some curvatures feel downright mean to early players. 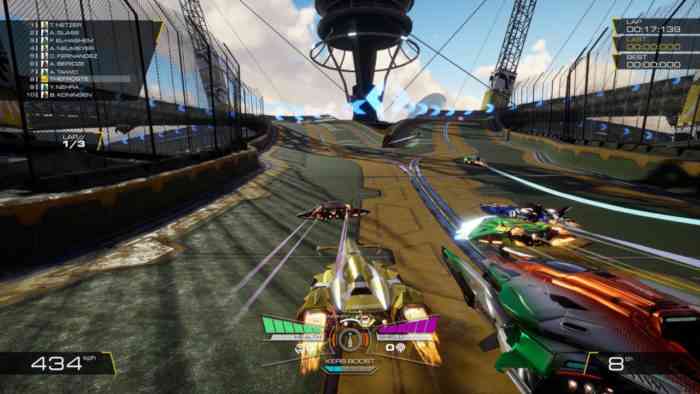 In the standard modes, you race against ten AI opponents over three laps. I was very pleased to see that the bots don’t rubber band too much. Kudos to the developers for not making it feel like they rubber band as you’re far in the lead. Nothing can kill a buzz quicker (looking at you Mario Kart). For those of us who want to win against live humans, there’s plenty of matchmaking options on display featuring most of the game’s modes.

For the single player, career mode is deep and meaty in a good way. And where I spent most of my time. You get to experience everything the game has on offer and compete for a gold medal in each event. This accrues currency you can spend to unlock more tracks and items for future races. There are also leaderboards so you can brag or be sad someone crushed your new record (basically me all the time).

Combat can happen in most modes. Your racer’s weapons are chosen by you before an event, so whether you prefer missiles to bombs is up to you. In practice, it’s all a bit underwhelming, though. I often found myself unsure if I’d even connected with an opponent or missed, as the telegraphing is spotty and the effects themselves are subtle. The weapons, too, lack any serious punch. If I’m firing a huge missile and I connect, let me hear it and let me see the explosion! I want to feel the heat on my eyebrows as whiz by my surprised enemy.

Not to say there aren’t bright spots in Pacer like the graphics and stunning looking tracks. While the tracks themselves tend to just bend in predictable ways, I often felt slack jawed watching the Niagara Falls zoom by as I spun around a corner. It all runs on Unreal Engine 4 at a high framerate so it’s a marvel to watch.

Lastly, no good zero-g game is going to get anywhere without memorable sound and music. Pacer doesn’t set quite a high bar here as the music seems somewhat forgettable (unlike a bounty of standout tracks found in say Rocket League). I eventually just turned things down a bit as nothing was really landing.

It all ends up coming across as an ‘almost’ experience. Pacer is almost a successor to Wipeout, but poor track design, a lack of strong audio design, and lackluster weapons all add up to a ho-hum experience that leaves you wanting for the early Wipeout days. If you really need something to scratch that old itch, then give Pacer a whirl. If you’re looking for the next S-Class zero-g racer, you’ll likely want to dust off an older PlayStation.

Formula Fusion Review – Not the Spiritual Sequel to WipEout We Hoped For
Next Need for Speed: Hot Pursuit Remastered Review – Beautiful & Rewarding
Previous Yakuza: Like a Dragon Review – Step Aside Kazuma