Coming in Q2 2018 for Current-Gen Consoles and PC

Both Wipout and F-Zero will want to watch their backs because a new “frenetic anti-gravity racing game” may be bumping them off the futuristic race tracks. Antigraviator has been announced by Cybernetic Walrus and publisher Iceberg Interactive, and it’s coming to PS4, Xbox One, and PC next year.

Antigraviator is due out in Q2 2018 and is being developed using the Unity engine. It’s promising to bring some new changes to the anti-gravity racing genre such having no speed limit and having the ability to use traps against other racers in addition to power-ups and boosts. Antigraviator aims to “deliver the fastest racing experience out there.”

Below is a brief description of what Antigraviator is about:

“In the year 2210, racing has evolved far beyond its expected limits. New terraforming capabilities paired with scientific breakthroughs in the field of antigravity have given birth to a new spectacle: the Antigraviator tournament. In Antigraviator, players will race on exquisitely detailed stages, full of light-speed danger, chaos and mayhem. Gamers will guide their Grav in three gameplay modes across four different worlds with three tracks each. These dynamic courses come to life while pushing the power of Unity to the limit.”

In addition to a single-player campaign, there will be support for online and 4-player local split-screen multiplayer. Players can use environmental traps to overtake their opponents such as hover mines, which can damage the race track to create a rockslide or even a rocket launcher. There will be “many more fiendish tricks.” 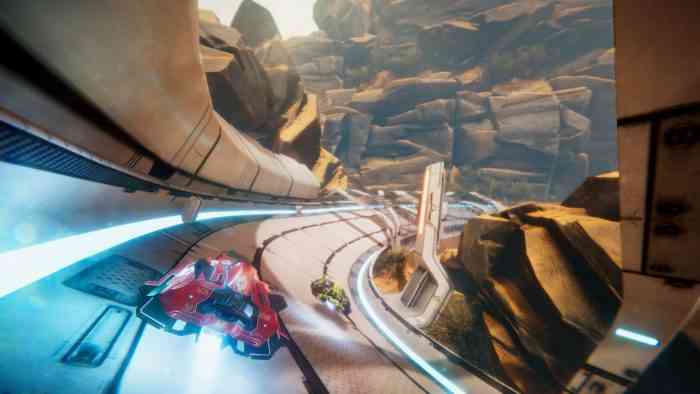 Players will also be allowed to customize vehicles but some upgrades may compromise on another. It sounds like there may be some sort of risk/reward element to its upgrade system.

Make sure to check out the trailer above if you’re interested in Antigraviator. You can stay up-to-date on the game by visiting the Steam page. After, leave us a comment and tell us your thoughts on the new game.