When The Outer Worlds’ first DLC dropped – Peril on Gorgon – we were treated to an exciting and intriguing glimpse into the kind of shock and horror the people of Halcyon love to listen to on the serial radio shows. Your beloved crewmates referenced it throughout the adventure, as a scary and shocking narrative with all manner of twists and turns leading to dark revelations about the corporations who run things from the shadows. When the game’s follow up DLC was announced, I couldn’t wait to see what the next adventure for the plucky crew of The Unreliable would be and it turned out to be… more of the same.

Murder on Eridanos doubles down and dives deep into the world of serials in Halcyon. Everyone’s favorite hero, Halcyon Helen, has been murdered just before her endorsement and unveiling of the latest flavor of drink from Rizzos. You’ve been hired on by both the head of Rizzos and the companies’ private security to solve the murder of this icon and find the killer. Most folk seem more concerned about the death of the character rather than the actress, but who could possibly have it out for her? The self-help guru who Helen called out as a fraud? The ex-boyfriend? The sidekick she upstaged? The pieces are all here for a wonderful serial narrative, but it comes across too similar to Peril on Gorgon for my taste.

A Sense of Space Deja-vu

You arrive in a new location, plenty of people are suspicious, strange occurrences are happening around you to further the plot, and corporations are of course playing their own nefarious part in what is going on. I really love the concept and it makes so much sense to really dive into the world of serials as it plays such a big part of every day life in Halcyon, but the structure feels too similar to what we have already seen. A lot of the great content that drives this narrative forward comes from the main quest, but as we have seen throughout the Outer Worlds, a majority of the fun comes from the side quests that pop up too. This is where we get to experience some of the nuanced meat of the people and environment, but it doesn’t seem to quite mesh with the main narrative here in Murder on Eridanos. 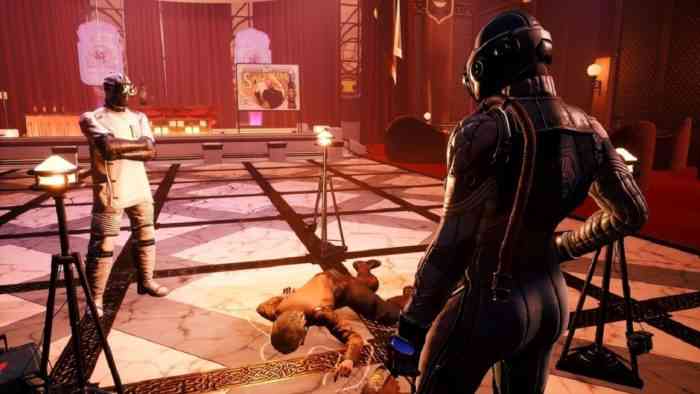 At times this feels like you are playing two different games at once: You found the scientist you need to talk to? She’s locked herself in her lab where all of the workers have gone crazy! Can you rescue her without hurting them? Great! We now have a tense set piece to work through that isn’t all guns blazing. Then afterwards why not talk to the pool guard and help him figure out how to make space chlorine to clean the water for the guests? I enjoyed both of these missions but they contrast so much in tone that they each lost some of what it had going for it, be it humor or tension.

To help with the investigation, you’ve been trusted with an experimental piece of technology that can analyze the environment for clues. It has a sassy onboard AI that will warn you of disturbances in the area which feels like a beautiful homage to early sci-fi when there was always the amazing thing-a-majig that was perfect for the very situation at hand. It even doubles as a weapon which is great because swapping between this and your favorite gun can become a chore in a heartbeat. I loved the moments when I got to scan around and look for clues, be a real investigator just like the serials I’m meant to be reminded of, but it didn’t have quite as much impact as I would have liked.

Are We Still In Cryo?

Playing this also had me boot up my PS4 for the first time since getting the PS5 and the load times were absolutely atrocious. Maybe I have been spoiled with next gen hardware, and I know that The Outer Worlds previously had a long load time, but whenever I entered a new area I had plenty of time to check my phone and look out the window, longingly waiting for the next section to start. I will say, however, that much like the rest of The Outer Worlds, Murder on Eridanos is brimming with that charisma-oozing charm you either love or hate. The dialogue is tongue-in-cheek, sassy, and loaded with parody that can’t help but make you smile. From a bellhop complaining about someone having a suitcase full of rocks for the express purpose of making him carry rocks, to unhappy employees being very wise to choose their words carefully to keep their jobs, the world of Halcyon is on full display in all its commercialized, capitalist glory. I’ve enjoyed the writing of The Outer Worlds since the start and a lot of what keeps this DLC afloat is its writing. 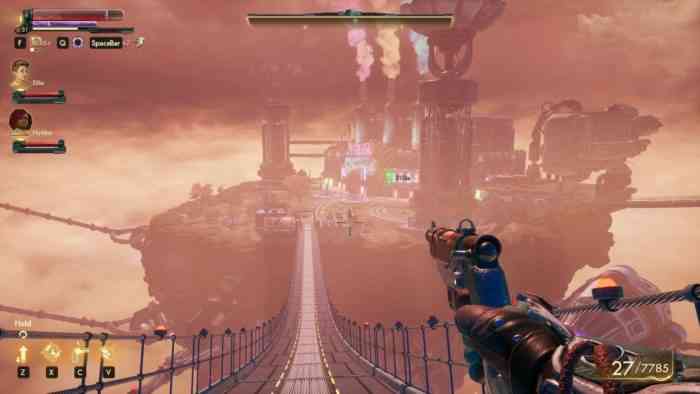 It’s a shame, however, that when engaged in conversation with my teammates that, more often than not, the screen would turn a single matte color. While I could see and hear their dialogue, there was nothing else on screen. It’s a strange bug I hadn’t seen before but one I just had to get used to as it would pop up frequently among my crew. There were also a number of moments where textures struggled to load when in the overworld – which can be understandable if it’s trying to render everything at once, it is quite a large area after all – but after a few hours the game went full “potato mode” and I decided to shut it off before it crashed entirely.

The Outer Worlds: Murder on Eridanos gives us an interesting and inspired tale to jump into with that loveable band of misfits you call a crew. It pays great homage to classic sci-fi and vintage serials when it comes to the main quest, but it doesn’t feel like it leans enough into that aspect for the rest of the DLC to make it stand out from its predecessor. The writing is absolutely on point and a true delight every step of the way, but the technical issues with dropped textures and exhaustively long load times kill the atmosphere the main quest is trying to set. If this could have leaned harder into the narrative it would easily stand tall over Peril on Gorgon, but instead, we are getting more of the same. This isn’t necessarily a bad thing as The Outer Worlds is a sleeper hit, but this should have been something greater. 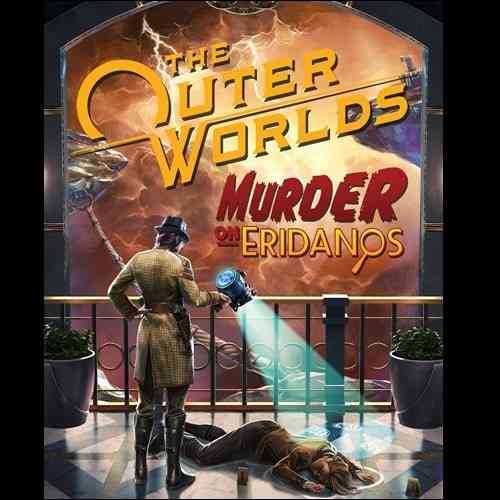