ONINAKI is the latest title from developer Tokyo RPG Factory, looking to build upon its past releases of I Am Setsuna and Lost Sphear. With a similar art-style as the previous games, ONINAKI sets itself apart with its real-time action combat. ONINAKI instantly garnered attention with a strong reveal due to its combat system and aesthetic, but does it live up to expectations?

Set in a world where reincarnation is a foundation of society, players are put into the role of Kagachi, a young Watcher. A Watcher plays a pivotal role in society as they help guide wandering souls to the Beyond by severing their bonds or ridding them of their regrets. ONINAKI’s narrative is one that, almost instantly, reveals itself to feature heavy themes. With its relatively cute art style, this came as a surprise, to be sure, but a welcome one. Overall, ONINAKI’s story was one of its most positive points, keeping me interested from start to finish. However, some pacing issues did make me feel that the latter half of the game dragged on a bit.

New Combat, Who This?

Unlike past Tokyo RPG Factory games, ONINAKI features a real-time action combat system. Combat, especially when you find a Daemon or two you particularly enjoy using, can be a blast. Though the combat can be enjoyable, it is somewhat repetitive as well, with combat being relatively simple. Personally, the simple combat had me considering which Daemon to utilize more for their skillset than anything else. Without a system that determines enemy weakness, most encounters can be treated the same. Unfortunately, a lack of enemy diversity also contributes to this.

Outside of combat, ONINAKI operates as a relatively typical JRPG. Players are free to navigate the primary town and speak to various NPCs and lost souls, who operate as side quest givers. Compared to other JRPGs though, there is a distinct lack of side content. While I played ONINAKI with a focus on the main quest only, I still noticed there was not much else to do even if I wanted to. Specifically, there was only one vendor in the town, and outside of the side quests for the lost souls, I cannot recall any other tasks to complete. For myself, this was perfectly fine, but for those who love sinking into a deep JRPG, it could be an issue.

The game also features the ability to travel between the Living World and the Beyond. These differing realms provide players with puzzle-solving elements, different enemies, and level modifiers as well. In addition to the gameplay difference, the worlds also appear differently, specifically with regards to its colour pallette. 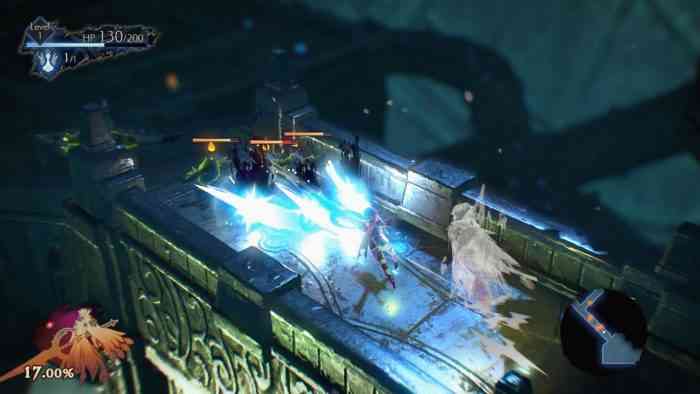 ONINAKI’s art style exudes the mood that the game sets out to provide. Originally, I found this to be quite impactful but later realized that a lot of the areas appeared quite similar – hazy, washed colours – with perhaps a noticeably different environments at times. In addition to the levels, the enemy designs, for the most part, were standard as well. Throughout the game, I noticed myself fighting similar monsters over and over, with bosses that all felt generic as well. On the other hand, the character models were well done, with significant characters appearing unique and differentiated, and their artwork in menus also being top-notch. While ONINAKI’s sound design and minimal voice acting were not outstanding, they would be atypical as to what one may expect from a JRPG.

As a whole package, ONINAKI is a decent title. While there is somewhat of a lack of additional activities to do, it fits in extremely well with the game’s narrative. Furthermore, the narrative of ONINAKI reeled me in from start to finish. It could be described as intriguing or mysterious, though at times predictable. ONINAKI is by no means the best in the genre but offers a strong foundation for Tokyo RPG Factory to build off of in the future.

Oninaki Gets a Free Demo With Transferable Save Data