Night Call is a fantastic noir-esque game where you take on the role of a Parisian taxi driver who is investigating a serial killer mystery on the side. With your friendly persona and a knack for getting your passengers to pour their hearts out, your goal is to drive them to their destinations, make good money to pay your daily bills, and hopefully land some helpful clues along the way.

There are three different stories each with its own serial killer mystery, but all of the stories begin the same way – one fateful night you happen to cross paths with the Paris’ serial killer and end up in a coma. Not much is known about the killer unfortunately, and what’s even worse is you are being pinned as the main suspect. A police officer, Busset, doesn’t believe this and secretly tasks you with aiding her in the investigation. You are given one week’s time to present your evidence and give Busset the name of the killer, otherwise all of the victims’ deaths will be blamed on you.

The game offers three levels of difficulty – a higher level means money will be harder to come by and the easiest is supposed to be a chiller experience. Regardless of your choice, whether or not you get good business seems to vary. I’ve had a couple nights where I drove people and earned at least 20 to 30 euros per trip, but as the next evening rolled around I was lucky if I could pick up a customer who paid well (oh yeah, and some customers don’t pay because you’re buddies with them). As random as this is though, it is hard to go broke if you’re in easy mode, which is a breath of relief for those just starting out.

Since you’re a taxi driver, you have to find passengers and drive them to their desired destination. By the way, you don’t get to actually drive the car, but you can tell it to pick someone up. To answer a call from a potential passenger, their icon is displayed on a full-screen map where you will have to click on their photo and your car automatically heads to their current location. Once you reach them, you will be able to see where they want to go, how far that journey is, and how much money you could earn. You have the option to refuse the drive if you wish. With each ride you fulfill, time will pass and money will be earned. Gas will need to be replenished once in a while too, so you have to make sure you have enough gas to drive longer journeys and money to fill the tank.

Night Call’s strength lies not only with its stunning and minimalist noir visuals, but in its supporting characters and the interesting short stories they share. It is truly in these moments that the game shines. There is an eclectic mixture of passengers who reveal their secrets, dreams, fears, and shockingly relatable experiences. You learn about what it’s like to face racism in a foreign country and what it’s like being a cat running away from an overly affectionate owner. The index of customers is vast, and sometimes picking them up again can unlock new dialogue. Say the right thing, and you can even connect with them after the whole story is over to see them again. 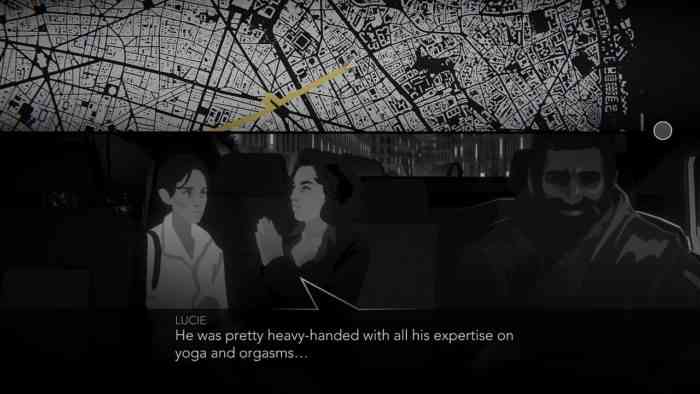 Something that doesn’t make much sense to me in the game is its lack of information – there are way too many unknowns that aren’t realistic to solving a serial killer mystery. You start off with little information, just a corkboard with photographs of the five main suspects, and despite helping out with the investigation you are not given any clues on who the victims were. How did they establish this to be a serial killing if there is little connection between the victims? Towards the end of the game when you declare who the culprit is, you might not even have enough evidence to substantiate that claim and it becomes pure guesswork at that point. One time I had already gathered enough information by Night 4, but another time I also had to guess the killer purely based on luck.

But the one thing that really bothers me the most is the number of glitches that occur in the game. It gets incredibly frustrating because the map sometimes will not load, clues you picked up fail to manifest, the newspaper you bought doesn’t open, and your “Passidex” (passenger index) will crash ever so often when you want to check it. These glitches really take away from the experience and make it hard to enjoy the game in one seamless play. Even though there is an autosave function, the engagement you once had with the game is quickly lost.

While the plot may not be as riveting and the player may feel like they’re guessing more than sleuthing, Night Call presents wonderful short stories featuring a bountiful cast of characters who share their lives with you. The unfortunate side to this is that it means the main serial killer plot takes the backseat on this one. Despite its numerous technical glitches, Night Call leaves a strong impression and I’m positive that with a couple of improvements it will definitely rise above.

You’re Getting Some Sweet Games in February’s Xbox Games With Gold
Next RUINER Review – A Brilliant Blood Red Adventure
Previous Deadly Premonition 2: A Blessing in Disguise Review – Weird and Wonderful