Following a two-year development cycle, EA is back on the court with the return of their once renowned basketball franchise in NBA Live 18. There’s no denying the competition EA has faced with the growing popularity of NBA 2K, and while the new features within NBA Live 18 certainly help the franchise bounce back, the game lacks the fundamentals required to overcome their rival.

Let’s begin with all of the good within NBA Live 18. I grew up playing basketball throughout the majority of my childhood years and into adolescence. So, naturally, I spent a significant period of time playing NBA Live on PS2 and fantasizing about my destined future in the NBA. Eventually, reality set in and I accepted the fact that I was never going to play the sport professionally. Thankfully, I can continue to fantasize in NBA Live 18’s new mode called ‘The One.’ Inspired by a multitude of RPGs, The One is NBA Live’s answer to a singular career campaign. Prior to the game’s launch, I sat down with NBA Live 18 Senior Producer, Mike Mahar, and learned that he and the team rebuilt major gameplay components and analyzed the ecosystems across multiple genres including RPGs and other sports games in order to develop the new mode. The culmination of their ideas have established a truly unique basketball experience, and, as strange as this may sound, I like to describe it as a sports game ARPG. From gear unlocks, public events, dialogue options, and skill trees, there was a lot to take in as I began my journey to becoming a rising NBA superstar.

“The One succeeds in immersing you within the life of a rising sports star.“

The One is a slam dunk. The inclusion of ‘Traits’, which serve as your character’s perks, enable you to personalize your play style. I began to enjoy the gameplay more and more as I leveled up. I chose to play as the ‘Slasher’ class, where I specialized in driving to the basket. Many of the traits I equipped catered to said playstyle. For example, the ‘Windbreaker’ trait provided a slight reduction in stamina loss while sprinting from the backcourt to the frontcourt with the ball. It suited my character flawlessly when I managed to steal the ball and drive down the court. Before the beginning of each game, you’re able to manipulate your traits based on the traits of your teammates and opponents. It made each encounter diverse and unpredictable and adjusting my loadout for the most effective performance kept things fresh. 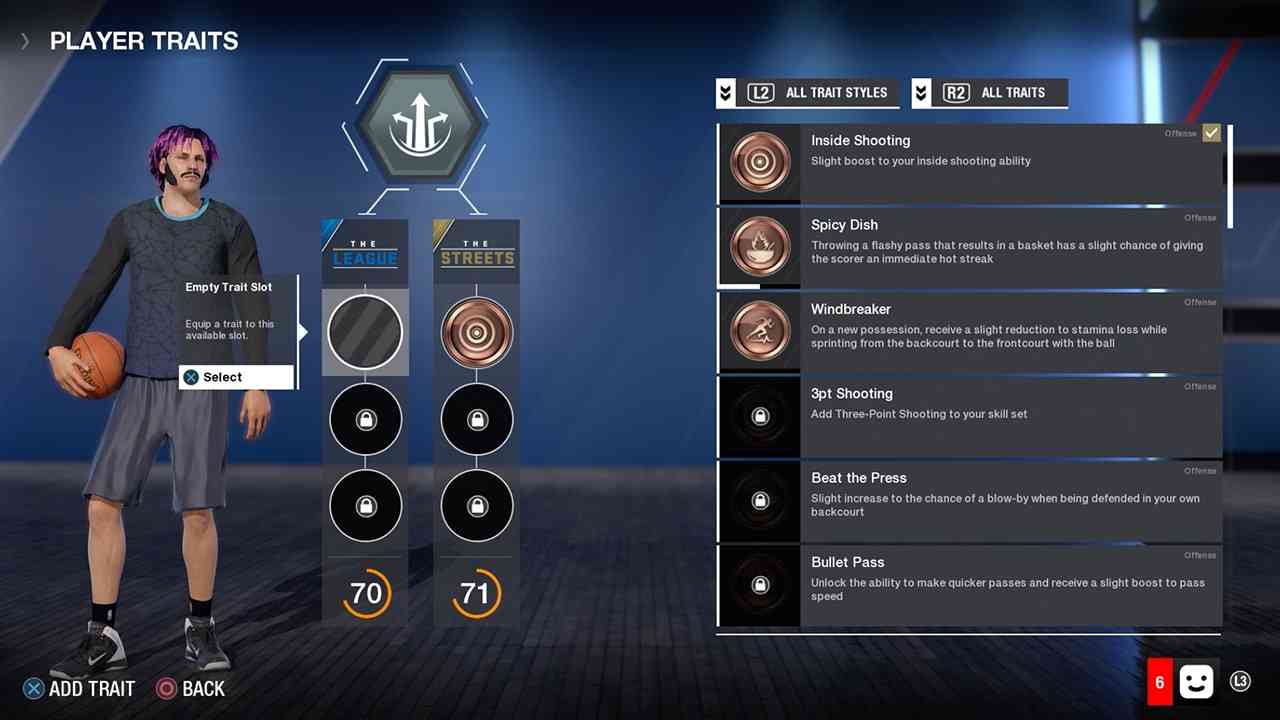 The One succeeds in immersing you in the life of a rising sports star. I enjoyed the inclusion of Stephen A. Smith and Max Kellerman of ESPN’s First Take as they talked up the promise of my character when reaching milestones. The text conversations you share with your character’s friends and agent are also a welcome addition. Though all dialogue options lead to the same conclusion, they do allow players to craft their own unique progression. Skill Points, (SP), are required to level up and gain new abilities. Reward Points, (RP), enable players to purchase in-game crates (like Overwatch loot boxes) that drop gear including all articles of clothing and tattoos. I greatly appreciate the fact that gear can only be acquired with in-game currency. In a time when microtransactions plague nearly every game in one form or another, it’s refreshing to play a game that encourages players to earn their progression rather than pay for it.

Boss battles and raids are a lot of fun and add to the unique nature of The One. A boss encounter may have you face off against old-school legends like Michael Jordan and Julius Erving, and successfully overcoming them rewards you with an abundance of SP, RP, gear, and Hype. I had an absolute blast inhabiting the role of my character as I conquered the streets in pursuit of the NBA Draft. Unfortunately, the game took a turn for the worse when I reached the draft. Prior to the game’s full release, I had the opportunity to experience The One’s NBA Draft at a preview event. During my initial playthrough, I was picked up by the Dallas Mavericks and began my promising career in the league. In the full version, my game has repeatedly crashed every single time I’ve attempted to access the NBA Draft. The Draft serves as the launching point of The One’s introduction, so, having it crash prevents me from experiencing the rest of the what campaign mode has to offer. It’s a major disappointment because up until this point The One has been a stellar ride. EA will undoubtedly patch the error, but as of right now, The One is literally unplayable once you reach the draft.

“After a two year development cycle, I was hoping for a bit more from two of my favorite modes.“

After discovering the inability to continue NBA Live 18’s flagship mode, I decided to jump into the more traditional modes. Franchise mode returns and succeeds in providing you with the tools to manage a team and build a legendary dynasty. I enjoyed simulating and participating in my first season as the Atlanta Hawks. However, Franchise mode feels rather empty. You’re unable to adjust the attributes of players, trades are overly simplistic, and the features hardly extend beyond the standard NBA season. Ultimate Team is a marvelous addition as always, and while crafting a team of my favorite all-stars is great, the mode lacks innovation. After a two-year development cycle, I was hoping for a bit more from two of my favorite modes. 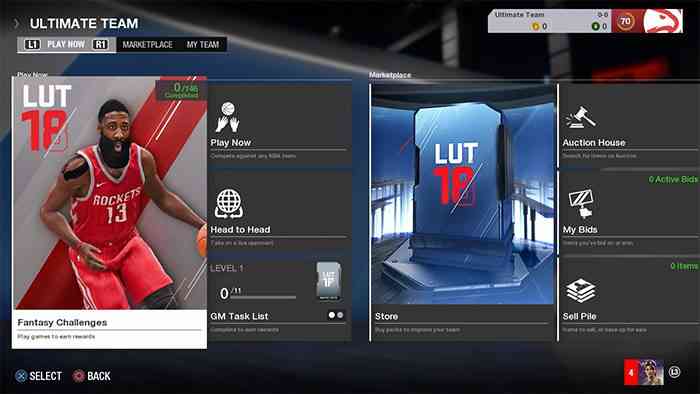 NBA Live 18’s presentation is magnificent but the performance is moderate at best. Visually, the game succeeds in portraying the appearances of real-life players including yourself. When playing The One, I took advantage of NBA Live 18’s face scan app when customizing my character. To my surprise, my character’s face actually looks exactly like me; nearly to the point of it being freaky. Taking shots, passing, and dribbling down the court all feel satisfying, but they collectively struggle during transitions. For example, if an opposing player steps into your path during a fast break, your player essentially halts instead of maneuvering around them. You’re able to perform various crossovers and such with the flick of the right stick, but I rarely found the dribbling mechanic to be useful. Additionally, some of the animations are a bit awkward and contribute to the clunkiness and lack of fluidity that occurs when players are bunched together.

Playing online is as enjoyable and competitive as ever but is limited to a ranked playlist. In the past, I’ve loved drastically adjusting the in-game rules when playing with friends online. Cranking the game speed up to a hundred and abolishing the rules always made for a ridiculous experience. Speaking of online play, preventing players from utilizing WBNA teams online is bound to be a disappointment for some. The addition of the WNBA for the first time in video game history is magnificent, but limiting the teams to offline play prevents players from taking full advantage of their inclusion.

NBA Live 18 is a great looking sports game that at times is a ton of fun to play. Serving as an RPG/sports game hybrid, the game certainly stands apart from its competition. EA has made an impressive effort to establish a new identity for their basketball franchise, but the game doesn’t quite live up to its promise. Having The One continually crash on me is nearly detrimental, and fan favorite modes don’t bring much of anything new to the table. Despite its limitations, I’m a huge fan of the sport and can’t help but play against players online over and over again. Overall, NBA Live 18 is a step in the right direction. If EA continually patches issues and updates the in-game features, I trust that it’ll serve as a tremendous stepping stone for the next iteration. 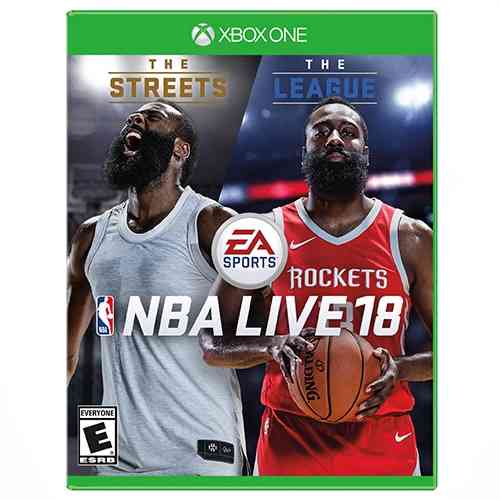