If there’s one thing I’ve grown to appreciate more since owning a Switch is that it’s becoming the perfect platform for independent games. Games that I barely gave a quick glance at on PS4 and Xbox One are somehow getting significantly more playtime on my Switch. I’m almost positive it has something to do with the portability factor, but for whatever reason, I’m enjoying the hell out of playing a whack ton of indies (or Nindies as they are called in some circles) on Nintendo’s slick new machine. Lichtspeer: Double Speer Edition gets a second life on the Switch after a lukewarm reception on PS4 last year and is another solid example of a game that feels right at home on the Switch, and is made better for it.

Lichtspeer won’t bend anyone’s noggin with complexities but its overall premise is pretty crazy (in a good way). Set in a future riddled with 80’s architecture and ambiance, an ancient God is looking to replace his boredom with some entertainment which can only be appeased through bloodshed. You can choose a gender and a name for your character but shortly after you’re awarded a special Licht power and unlimited speers (not spears) to go out and kill the various monsters that roam the land. It’s a pretty messed up scenario, but it does give some context to this bizarre world as well as a reason for you to stay alive among the waves and waves of zombies, cyclops, and exploding turtles. 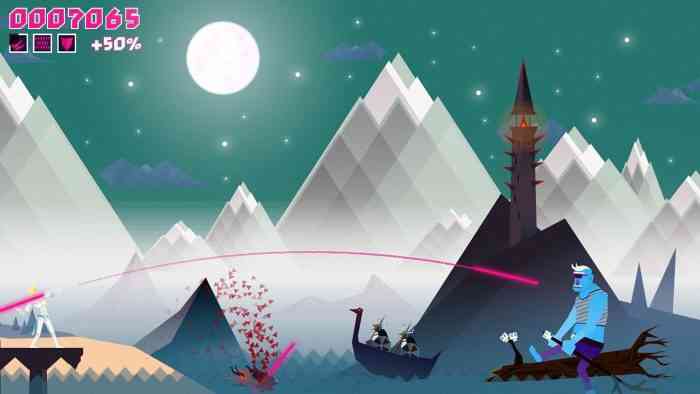 There’s a charm to Lichtspeer’s art style that took me by surprise that isn’t evident by a couple of screenshots. The angular visuals may look simplistic but they lend themselves well to interesting backdrops which range from ice blue arctic mountains to ancient pyramids in sweltering hot deserts. They don’t add much to the core gameplay but they do look good and complement the spear-throwing shenanigans. The music and sound are also noteworthy and mix with the 80’s neon-flavored art style with a thumping soundtrack and cool synth effects.

Understanding the mechanics in Lichtspeer is a breeze but it’s the increasing waves of enemies and tricky boss battles that will have your palms sweating. Pressing and holding A will ready your speer, then it’s a simple matter of aiming up or down with the joystick, then letting go of A to launch the speer at the oncoming enemies. Typically your character will be on the left or right side of the screen, facing the horde of bloodthirsty creatures coming from the opposite direction. Occasionally, you’ll be thrust into the middle of the map where you’ll need to keep an eye and steady trigger on both sides. These are particularly stressful segments requiring quick hand-eye coordination and precision aiming. Failure to kill a single enemy can spell doom as it’s an instant death if they grab your character.

“Lichtspeer: Double Speer Edition is another solid example of a game that feels right at home on the Switch, and is made better for it.”

Things can get hairy awfully quickly if you aren’t careful. Enemy types are plentiful but they do get repetitive after a while. After a few levels in, you’ll know how to take down each one. For example, cyclops enemies are most vulnerable with a speer in the eye while the dynamite-strapped turtles can be killed with a headshot or only when the dynamite is visible which often results in a satisfying explosion. Certain enemy types wear armor and can even launch their own projectiles. If all of that sounds hectic, then you aren’t wrong. Thankfully, Lichtspeer features a score counter in which you earn points by racking up combos through headshots and how accurate you are. Your overall score is turned into LSD (Licht Standard Denomination, of course) which can be spent on purchasing new abilities that can help against those pesky monsters.

You always have three abilities at your disposal, which offer both offensive and defensive benefits. Some abilities, like Trance, were utterly useless to me, but in many cases, they proved their use when I found myself literally cornered because of my poor aim. Each is mapped to the X, Y, and B face buttons so they’re easily accessible in a pinch but gosh darn did I have a rough time remembering which ability corresponded to which button. Most cases I’d hit the wrong button so I found myself just mashing down on all of them at once and pray to the crazy Elder God that I’d make it out alive. 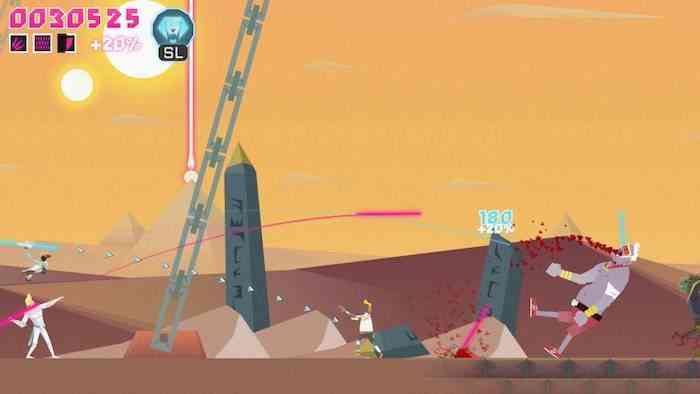 During boss fights, however, these abilities are disabled as these battles are treated more like obscure puzzles rather than encouraging the need to spam the speer button over and over again. I enjoyed the change of pace that these provided but I’ll admit that most of my deaths came from these moments. Taking down these monstrous beings do reveal some clever innovations for uncovering various weaknesses but it does involve seeing the game over screen too many times. Thankfully, the checkpoint system in Lichtspeer is generous, usually placing you back at a boss’s phase or stage instead of having to repeat the whole encounter.

There are 13 levels in the game — each with 5 or so mini single-screen areas — and each increasing in difficulty. While things may start on the easy side, Lichtspeer isn’t a pushover especially when it likes to bombard you with an almost unfair amount of enemies. Death is part of the game and it becomes immediately apparent that it won’t go easy on you. Sometimes, particularly in the later stages, Lichtspeer feels like you’re going through the gauntlet. It’s less concerned about player balance and more interested in throwing whatever it can at you. It can grow tiresome after a while and I found myself putting down Lichtspeer for a breather more than I’d like to admit. On the other hand, plowing through a difficult section and seeing your character saunter past the plethora of bloody bodies on the ground is strangely satisfying. 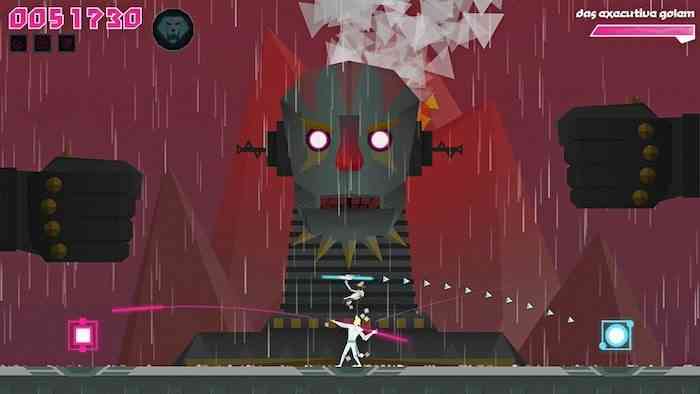 While the odds may stack up against you when playing alone, the Switch version has an exclusive co-op mode (hence the Double Speer title) that levels the playing field. Thanks to an intuitive drop-in/drop-out system, a second player can grab a joy-con and control a cute, flying Dachshund that makes the spike in difficulty more than manageable, but will still kick your ass. Playing co-op means sharing abilities and cooldown timer but you also obtain a devastating laser attack that needs to be charged by continually getting headshots. I went through the main campaign solo for the first time, then went back and played co-op with my wife. Playing Lichtspeer with another person, even in tabletop mode, is a surprisingly fun time and I’d recommend playing this way from the get-go.

Rounding out the exclusive Switch features are two additional difficulty modes: Rage Quit and New Game+. Rage Quit, as you’d expect, is more challenging with the removal of checkpoints, so each death means resetting back to the beginning of the entire level, even during bosses. New Game+ is unlocked after completing the game and shakes up enemy placements and their strength while also adding more bonus missions to each level. It’s worth playing through if you’re up to the challenge, but as I mentioned before, Lichtspeer on its own is already a difficult game.

Lichtspeer: Double Speer Edition surprised me with its addictive “one more try” gameplay cycle and a refreshing co-op multiplayer mode. It’s also another excellent example of how the Switch is becoming the ideal platform for indie developers. Lichtspeer didn’t wow anyone on PS4 but it’s a welcome addition to the Switch. The game teeters close to punishing the player with its brutal difficulty but it never felt frustrating to the point of quitting. The simple mechanics and graphics make Lichtspeer approachable to anyone and lends itself well to the Switch’s pick-up-and-play ideology. Grab it if you’re looking for some mindless fun. 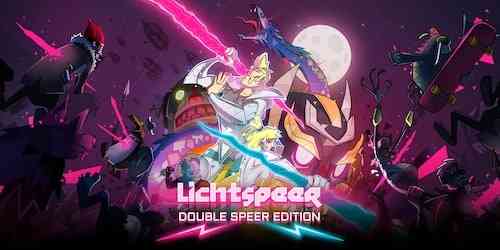