Developed by Terrible Posture Games, Mothergunship is one of those rare gems that blends a few different genres and comes out the other end with a perfectly exciting and serviceable experience. A first-person shooter rogue-like bullet hell sounds like a frantic and wild time – which it is – but it’s handled with such careful nuance that it really could be enjoyed by even the most casual FPS gamer. Set ten years into an alien invasion, players take the role of a nameless survivor who was rescued by members of the resistance. Initially – and for most of the story – considered to simply be cannon fodder, you are sent on missions that might be rinse and repeat, but the narrative between the chaos is often times amusing, if not downright hilarious.

The Colonel – your superior officer – is a complete loon, barking nearly nonsensical orders and ideas of what war tactics are, he reminds me somewhat of Soldier from Team Fortress 2 and I never get tired of his weird personality. Early in the story when the aliens ask you to identify yourself he blurts out you are there for pizza delivery and somehow that works? Mothergunship certainly doesn’t take itself seriously for how brutal it is and I applaud the humorous take.

If you’ve played Doom from 2016 you’ll know what to expect in terms of movement. The player is going to move incredibly fast and begins the game with a triple jump. Buff drops during each mission will increase your jumping and at one point I could chain together eleven jumps without touching the ground. Not only was this ridiculously fun, it makes dodging enemy fire that much easier. Following the rogue-like format, missions begin with the player in a hub room where they can throw together a simple gun and jump into the next generated room. Every room usually has more than one option of where to go and there are a few different kinds of rooms to add some variety to the experience. Dice rooms will randomly choose an elemental hazard such as lava or acid for the next room, challenge rooms give you a task to complete on top of clearing the room, and prize rooms reward you with a few extra coins at the expense of a harder room to follow. 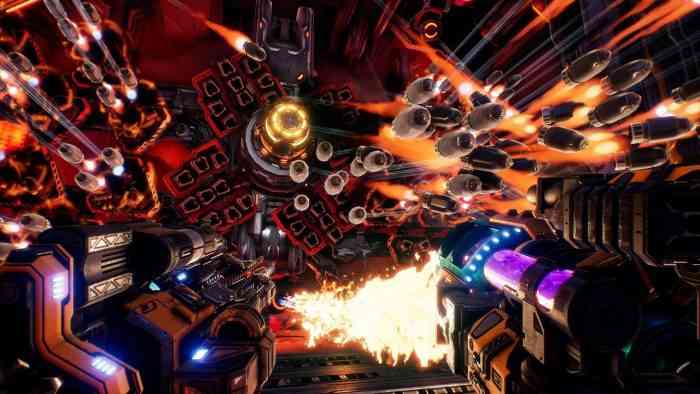 If you find yourself low on health and need to get out of there, Mothergunship lets you fly through any door to the next room; however, shops will remain locked until the room has been cleared. Visiting these shops is absolutely vital to survival as you’ll quickly build mind-blowing weapons of incredible destruction that can mean the difference between peppering your enemy or one-shooting them. Crafting in Mothergunship is easy and satisfying to the chaotically inclined. Connectors of varying shapes and sizes can be hammered together with insane amounts of guns added, not to mention the caps – mods that can add a wide variety of effects. At one point I had built a gun for one hand of over twenty parts and dealt almost 1,100 DPS, it was so over the top to be hysterical and a joy to one shot everything.

Even if you die in a stage – and you will die – exp still carries over, and filling the bar unlocks a skill point to drop into your armor. It’s also nice these can be re-allocated between missions, so if you find you need more heath you can pull from something else. These buffs are small but enough to feel significant without being over-powered. It’s worth noting the learning curve is generous at the beginning and ramps up quickly, but the drive to build these incredible weapons and that feeling of sheer chaos makes it less frustrating when you die, instead motivating you to get better. I feel more confident in my FPS skills after having played Mothergunship for so long.

While the game has fantastic presentation for what seems like a budget game (retailing for $24.99) I did have a few gripes. There seems to be a heavy amount of lag as the next room loads which – clearly as I’m waiting for the next room it’s not like I’m doing anything else – it just feels a little off-putting, however I trust the issue will be addressed post-launch. As cool as it is to look at these massive weapons and enjoy the finer details of rush and tarnish, it would be nice if we could have basic color selection for the connectors. These come in standard metal grey or hazard yellow which makes sense, but it can get old fast. I’m not asking for full on customization, just a few other options. Finally, the lack of HUD arrows to each door can slow down progress. After clearing a particularly massive room there can be upwards of six doors and more than a few times these entrances are tucked away in unknown locations. An indicator would not only make it easier, it means we can get right back to the action a little faster. 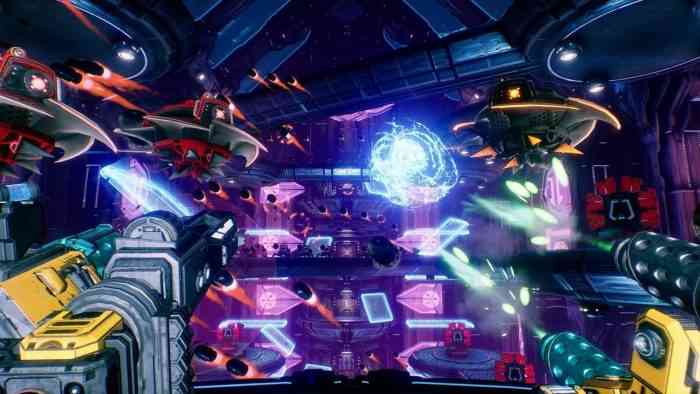 We’ve also been promised online co-op in August, with visible portions of the game clearly already built for the multiplayer aspect. Given the wild and intense nature of the game I truly hope co-op will run smoothly because this game would feel amazing to play with a friend.

Mothergunship is a skillfully molded combination of first-person shooter and bullet hell that exudes chaos with over the top, larger than life weapons and fast-paced action. The narrative is humorous and a great satire of the setting and the controls feel fantastic. Rarely do I play a game where dying makes me excited to keep playing and I easily lost track of the time from constantly wanting to improve and build something bigger, better, and badder. 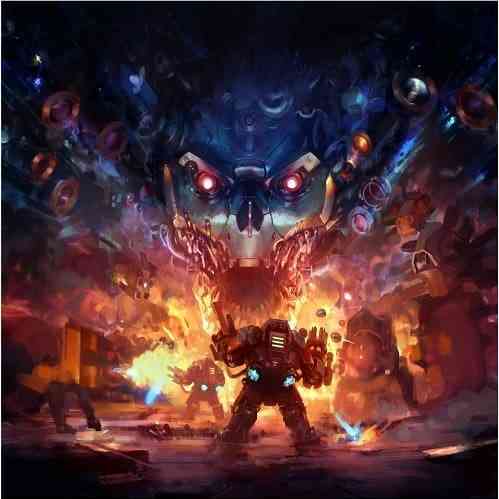 Void Prison Capturing An Audience on Switch Later in January

Orbital Bullet Takes Things to The Next Level With Update- Over 9000
Next The Path of Motus Review – As Frustrating As Tripping Over Branches
Previous Runbow Review – Great for Multiplayers, Wish Hue Were Here