When you think about smoothly drifting a corner at full speed, caught up in the pack, and looking for that sweet spot to break away from the crowd, you probably don’t imagine the next corner will have an electric hand mixer that’s spilled strawberry icing onto the track. Nor do you target the car in front of you, ready to deliver swift justice only to fire foam Nerf darts at his exhaust pipe. However, if the idea of ramming giant Cheerios and speeding into a pool tables’ corner pocket piques your interest, look no further than Micro Machines World Series.

A chaotic blast from the past, Micro Machines World Series is the first we’ve seen from the oddball racing franchise since its previous title in 2006, featuring a number of titular toys to race with, each with clever names and sarcastic catch phrases. Unlike traditional racing games, Micro Machines keeps the camera in a strict top-down locked angle with players having to adjust their steering based on the track and the various hazards. Offensively, the vehicles can pick up one of three Nerf weapons during the standard race mode, which adds to the nostalgia and child-like mentality of the game, but it could have used a few more options for diversity.

“If the idea of ramming giant Cheerios and speeding into a pool tables’ corner pocket piques your interest, look no further than Micro Machines World Series.”

The game features three main modes: Race, Battle, and Elimination. Race is your standard affair; be the first to cross the finish line. It may sound easy, but with some wild handling, hazards, and aggressive AI, it’s a satisfying challenge to earn first place. Battle mode is just as hectic and easily just as fun. After doing a few matches in Battle mode I almost forgot this was an actual racing game. Each of the playable cars has its own unique load out of special abilities to use against the other team in hilarious toy combat. Battle modes I encountered were Bomb Delivery, King of the Hill, and Capture the Flag, however, when playing online it seems the type of match is chosen at random, and I sadly did not come across a Deathmatch outside of Skirmish mode for couch co-op.

Finally, we come to Elimination, which was hands-down my favorite experience. Players race with the camera following the lead car; whoever goes careening over the edge or manages to fall outside of the camera meets a fiery end and is out for the round until one driver is left. Based on the order of elimination, you gain or lose progress on a chart at the top of the screen. This can easily be a lengthy match with a lot of back and forth against other players. It’s incredibly satisfying to win even just one round and a blast to play while relaxing with friends. 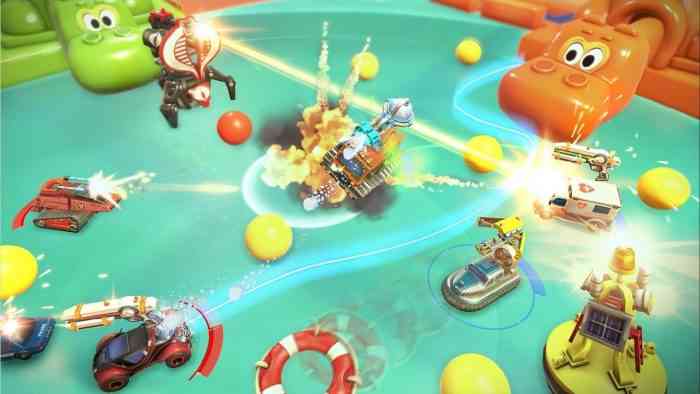 Every track is set in a larger-than-life location in your everyday home –albeit an incredibly messy one. Players will take their tiny cars and race across the kitchen table, the stove, in the garden, on a pool table, and much more, with great detail put into the environments. In one race I drove over a Hungry Hungry Hippo case, crashed into a Nerf gun, and ran over some green army men, all of which were authentic to their actual product. Even G.I. Joe is represented in the form of two playable vehicles: one for the Joe’s and one for Cobra.

“Micro Machines World Series simply doesn’t offer enough to players to keep them invested beyond playing it as a party game.”

Micro Machines has a plethora of unlockables to keep players going, with each vehicle having a number of skins, remodels, taunts, and tombstones to equip, but even with such a big personality both in presentation and explosive gameplay, it feels small in a way Micro Machines wasn’t intending. Unless players are nostalgic for the property or simply completionists, there isn’t much reason to invest serious game hours into a product that comes up short. While the game does offer Ranked matches and Special Events, there is no Campaign or Grand Prix mode, and given the creative nature of the game, it’s surprising there isn’t much in the way of customization.

With a colorful and wild presentation, Micro Machines World Series is a hectic and incredibly fun racing game that manages to be both challenging and light hearted. The level designs, details, vehicles, and game modes are all superb, and the game’s announcer has a wonderfully over-the-top comedic delivery that adds to the excitement. It’s a game full of laughs, but like a good joke, the laughter ends. Micro Machines World Series simply doesn’t offer enough to players to keep them invested beyond playing it as a party game with those who remember the original toy line from the 90’s. The fact that online play requires a paid service on console and still provides only limited options severely hurts what should have been a triumphant return for the tiny toy cars.

Redout 2 Review – The Fast, the Furious and Frustrating
Next World to the West Review – Flaws Aside The Aesthetic is Beautiful
Previous MXGP3: The Official Motocross Videogame Review – A Stick in the Mud