MXGP3: The Official Motocross Videogame Review – A Stick in the Mud

Motocross is an extreme sport that many people know exist, but few know much else about. It’s a bit of a niche sport, but that doesn’t mean there can’t be a great motocross game with the ability to bring in both fans of the sport as well as racing game fans looking for the next high-octane digital adrenaline rush. MXGP3: The Official Motocross Videogame sets out to achieve these lofty goals, and although it has its moments, in the end, I don’t think it will appeal to many beyond that niche group.

My overall impression after loading up MXGP3 for the first time was an overwhelming sense of adequacy. The menus are clean but basic, the music is repetitive and not particularly grabbing, and the amount of content is decent but not nearly as extensive as I would like it to be. Jumping into a game only extended this feeling. Each time you load up a racing track, the camera pans around the course to give you a preview of the environment and layout. For some unknown reason, though, MXGP3 decides to show you this before all the game assets have finished loading, meaning most of the course looks like a blurry mess during with objects popping in abruptly or suddenly coming into focus. Thankfully, by the time you start racing, things begin to look much better.

“All in all, the graphics get the job done, but in an era of games like Forza and DIRT, MXGP3 just doesn’t stack up.”

The riders and bikes generally look good, especially in motion. Their jackets flutter in the wind and crashes lead to some amusing ragdoll effects. The tracks themselves also look pretty, albeit a bit one-note. I particularly liked racing on wet tracks just after a rainstorm, where glimmers of sunlight would bounce of the mud puddles on the tracks. You can race in the rain, but I found the water effects of the rain weirdly geometric looking to the point where it distracted me from the races themselves. All in all, the graphics get the job done, but in an era of games like Forza and DIRT, MXGP3 just doesn’t stack up. 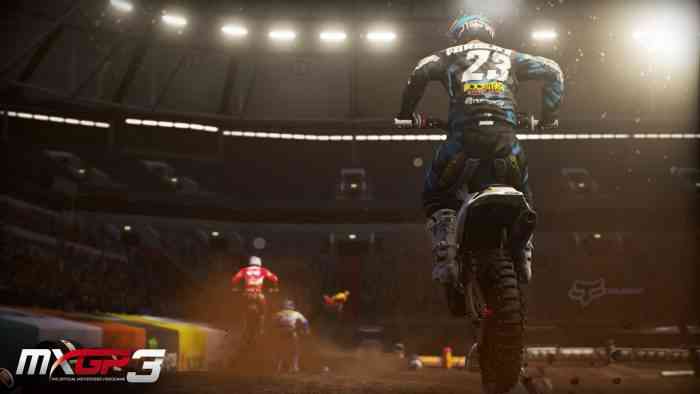 Being a motocross simulator, I went in expecting the physics of the bikes to be a central focus of the gameplay, and it’s clear a lot of attention was devoted to it. The game runs in Unreal Engine and the developers definitely used the technology to their advantage here. Each motorcycle behaves in a way that feels both satisfyingly tight and unpredictable. Where If you make a sharp turn and hit a rough patch of dirt, your bike could recover or it could suddenly jump in an unexpected way. Though this was a bit frustrating, it did add to the sense of realism. I also appreciated the inclusion of multiple bike physics settings, allowing players to adjust how realistically a bike behaves to match their skill level. The only complaint I have about the physics and how the game feels is how it handles jumps, which are undoubtedly a huge part of motocross. Bikes feel floaty once they get airborne and the landings feel shockingly gentle, almost to the point where you’d think the bikes just glided softly to the ground. It’s not a huge deal, but having those jumps feel weighty and impactful would have really upped the intensity of the races.

“I’m glad that MXGP3 exists because when it comes to modern motocross games the pickings are pretty slim and there is a sizeable group of gamers out there who love the sport.”

One of my favorite features of MXGP3 is the rewind function. Essentially, this acts as a “do-over” button, allowing you to rewind a few seconds of a race to correct a fatal mistake like a crash or accidentally going out of bounds. Using this feature is completely optional, but I found it extremely useful as mistakes are common and even on normal difficulty settings, the game is damn hard.

There are a few different modes to choose from in MXGP3, including a career mode and online multiplayer, but none of them feel very fleshed out. The career mode essentially just takes your “custom” character through a few Grand Prix tournaments while your manager sends you text messages in between races telling you to do better than a certain opponent or how many points you need to advance. I put the word custom in quotation marks because although you do get to create your own racer, there isn’t really a full character creation system in place. You get to choose your racing number and adjust their clothing, but ultimately it ends up being just another faceless avatar. 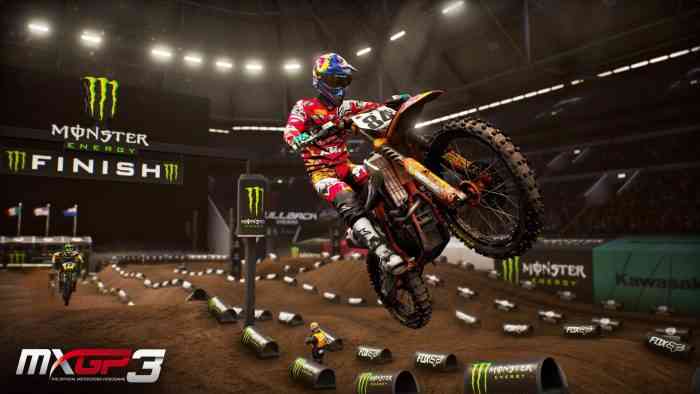 I was happy to see multiplayer functionality to add some much-needed replayability to the game, but it is a barebones affair. You can search for game lobbies or jump into a quick match but other than adjusting a few minor game settings, there aren’t many game modes or fun tools to play around with. It also took quite a long time to get into a game due to it being up to the lobby owner’s discretion as to when a race begins. A few times I sat in player lobbies for upwards of five minutes before I was finally able to a race.

I’m glad that MXGP3 exists because when it comes to modern motocross games the pickings are pretty slim and there is a sizeable group of gamers out there who love the sport. That being said, it’s evident MXGP3 is not an AAA racing game. With 22 people on small dirt tracks, the races are often fast-paced and exciting and the bike physics add a surprisingly realistic touch. Unfortunately, with its so-so graphics and lackluster game modes, the rest of the experience feels somewhat rushed and unpolished. It should please motocross fans looking to fill that two-wheeled void in their lives, but for those expecting it to be an AAA racing title, MXGP3 will probably end up feeling more like a stick in the mud than a fun race through it.