Marvel’s Avengers launched last September and the reaction was, being generous here, mixed. At launch the game was lacking in certain features such as multiplayer and was plagued with technical issues. Six months later most of the technical issues, though the previous console gen is still having problems, have been addressed but it maybe too little, too late. The window of acceptance may have passed this game by.

It hasn’t helped that promised content has arrived late or not at all because technical fixes had to be done first. So promised DLC like Spiderman, on the PlayStation, and Black Panther have to yet appear. What has been delivered since last September is a technical patch, which includes PS5 upgrades, as well as DLC for Avengers Kate Bishop and Hawkeye. So the Avengers team rounds out to date with Captain America, Ironman, Thor, Black Widow, Hulk, Ms. Marvel, Kate Bishop and Hawkeye.

In the original game release, the single player campaign told the origin story of Ms. Marvel aka Kamala Khan. The story is the strong point of the game. Probably because it has so much comic lore to draw from. The single player mode is the best way to play because the AI in this game is bad. Not just the enemies but more importantly, your allies. The game is set up around creating a team of four members. But quite often, your mates hover in the air, contributing little to fights and berating you for not doing better. You can get through the missions just as well playing solo.

Of the two Season 1 DLCs the Kate Bishop one is the better of the two. Her story is more engaging. You get to play out her origin journey and how she meets and becomes part of the Avengers as a means to find Hawkeye. It is also slightly longer than Hawkeye’s story. Kate’s story takes about two and half hours whereas Hawkeye’s is only two hours.

The Hawkeye DLC is underwhelming compared to Kate’s on several fronts. He has very little interaction with the Avengers and his power suite is pretty much the same as Kate’s. Both have bow and arrows for ranged attacks and swords for melee. The problem for Hawkeye is Kate was released first and she’s quicker and more nimble. Playing Hawkeye is just a less enjoyable tank. Finally, from a storytelling perspective, the Hawkeye DLC has no true ending. It’s just part one of a story that you have no idea of how and when it will be continued. Perhaps it’ll be in the Black Panther DLC but given Hawkeye’s prominence in the story, think Flash in Flashpoint, that doesn’t seem likely.

While the roster has been expanded, the core gameplay remains unaltered and the DLCs are merely add-ons rather than bringing new things to do. Neither introduce any new enemies. It’s more AIM robots and the same missions: clear out AIM bases and/or shutdown AIM servers coupled with uninspired level designs as most of Hawkeye’s DLC takes place in the Wasteland. As the name suggests you’ll find yourself traversing boring stretches of sand in which cookie cutter enemy bases are sprinkled about. The gameplay already felt repetitive in the first campaign and the DLCs just deepen that rut. 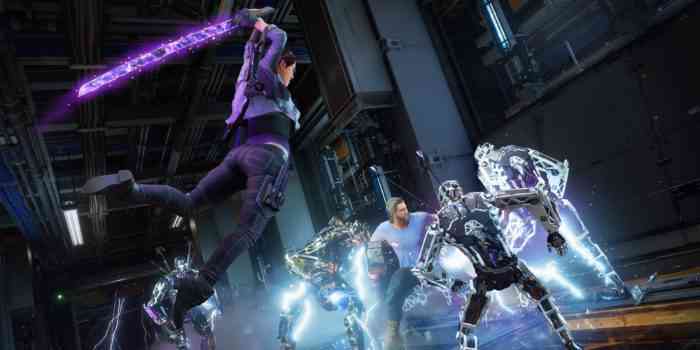 Multiplayer works now but you may have trouble finding companions to play with. That’s not a good sign for longevity. As usual, your experience depends on how well your live companions work as a unit. It should be noted that multiplayer is cross platform-enabled so if you hook up with a PS4 player steel yourself for return to long load times via elevator scenes.

On the positive side a March patch addressed many of the technical issues. The PS5 upgrade offers the benefits in graphics and load times. The data transfer speeds of the PS5 continue to shine with their SSD turbocharged glory. The initial load of the main menu comes in at a nifty four seconds with the PS5 versus for the 24 for the PS4. The express load times really show their speedy goodness when you have chosen a mission. You’ll barely have time to blink as another mere four seconds pass by and you’re into the action. With the PS4 you’ll be tempted to take up knitting as it takes over an agonizingly long minute to accomplish the same thing.

Two graphic modes are available to choose from: the Highest Performance 60 FPS mode and the 30 FPS/4K Quality Mode. Resolution in both modes is handled dynamically with the performance version using the checkerboard solution. Both modes target 4K with the Quality Mode hitting the 4K target more often than not. The performance mode scales a lot more ranging down to 1440p, especially during big action scenes.

Both of these solutions use higher quality textures which lends to a much cleaner and sharper image compared to the PS4. This higher quality is noticeable in the liberally applied particle effects during battles. Weapons, character powers, and explosions all look great and there is less screen shimmer when moving around. The Performance Mode takes some quality cuts when handling shadows and water. This is also true for Depth of Field and Motion Blur. All of these look much better with the Quality Mode. In addition, the Quality Mode has enhanced environment destruction effects.

Most importantly both modes do a superior job of meeting their respective frame range targets. The Quality Mode is a near locked 30 FPS while the Highest Performance fluctuates a little more usually when switching from in-game graphics to cinematics. The only time you’ll see in-game dips is when you Hulk Smash everything in sight. In terms of fluidity the performance mode wins handily as input response is just so much quicker and smoother at 60FPS. As usual it’s the preferred way to play. 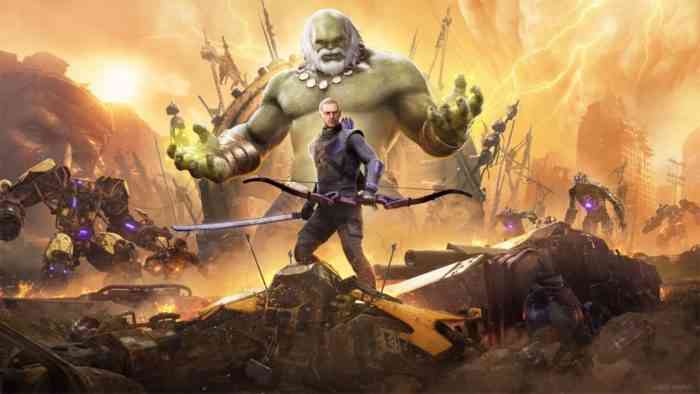 While playing the game, there was one thing that stood out to me that points out to a fundamental design flaw, however. As a service, game balance is a tantamount priority. Every game character must feel balanced against the others. This works fine in a new property like Destiny but not for such a well known entity like the Marvel Universe. It just plain feels weird that in a given battle situation the Hulk and Hawkeye possess the same offensive and defensive power levels. There’s no way the Hulk should be staggered by an attack from a single enemy redshirt as if he were a puny human. Yet that’s the path Crystal Dynamics has chosen to follow. It’s a concession you may be able to accept but it doesn’t work for me. I would have much rather seen game missions tailored to take into account Marvel character attributes.

On a PS5 the game looks great, plays well, and loads up quickly. However, none of that can overcome the uninspired level design and lack of enemy variety. So despite the technical improvements, the game has not become more fun to play. The two DLCs add characters whose power sets are too similar. The main saving grace here is that the campaign stories are interesting enough to warrant a playthrough in solo mode. Unless there is some major gameplay tweaking Marvel Avengers doesn’t look like it will assemble to become an ongoing gaming service. To sum it up, I came for the gameplay but only stayed because of the story. 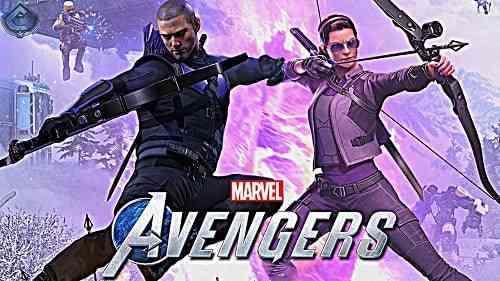