Pac-Man 99 Review – A Classic Given a Fresh New Take

Nintendo Switch Online doesn’t offer too much for those looking to play something new. The service heavily relies on its NES and SNES Classic libraries to serve as its main selling point outside of the obvious requirement to play games online. However, every now and then Nintendo steps somewhat outside the box and releases an original idea. In 2019, they released Tetris 99, a free title for those with Nintendo Switch Online subscriptions that combine classic Tetris gameplay with modern battle royale mechanics. After seeing what a success the game was, they did it again with Super Mario Bros. 35 (Rest In Peace) and most recently with Pac-Man 99. Now, it’s been a few years since Tetris 99 released and the concept has lost its novelty a bit now that it’s been done a couple of times. So, the question is does Pac-Man 99 hit the same way Tetris or Mario did? To put it simply, it does.

Pac-Man 99 combines traditional Pac-Man gameplay; eating pellets, avoiding ghosts, etc., with the added challenge of simultaneously competing against 98 other players to be the last Pac-Man standing. While the core gameplay consists of classic Pac-Man mechanics, it adds some new combat elements as players are able to send additional enemies known as “Jammer Pac-Mans” to slow their competitors down, as well as special red Jammer Pac-Mans that will instantly kill you if you touch them.

Similar to Tetris 99, players are able to choose between Random, Knockout, Hunter, and Counter options with each targeting a different type of player. While the Counter option targets players attacking you, the Knockout option focuses your attacks on players who are close to elimination – learning what these options do and when to use them is a great asset especially when the player count gets pretty low.

There are also special power-up options that can give you a bit of an edge during the round. These options include Standard, Speed, Strong, and Train; all of which give you a special bonus when you are using a power pellet. It’s important to learn what each power does and to come up with a strategy to really take advantage of the additional help.

There are also other ways to improve your odds. Clearing the board of every pellet gives you a speed boost and you can get consistent short-term speed boosts by turning a corner perfectly. If you’re a fan of Pac-Man’s gameplay and enjoyed the new mechanics added in Tetris 99, then you’ll find a lot to love about Pac-Man 99. Rounds are also pretty short in comparison to most multiplayer games making it incredibly easy to pop back in for one more round. 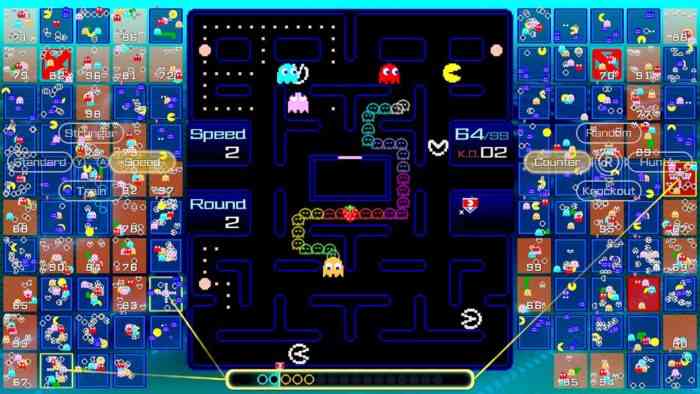 In addition to the free-to-play option included with your Nintendo Switch Online subscription, Pac-Man 99 has some DLC that adds new modes and custom themes. For starters, if you ever want to play the game without a Wi-Fi connection or if your Nintendo Switch Online subscription runs out and you decide not to renew it, the only way to play the game offline is through the various DLC modes. CPU Battle allows you to play the game’s standard 99-player mode against CPU players. CPU Battle has several different difficulty and speed options to choose from, making it a great way to practice if you find yourself getting knocked out rather early when playing online. It’s also a great option to have in case Nintendo ever decides to shut down the game’s servers like they did with Super Mario Bros. 35.

More Options For Those Willing to Play

In addition to the CPU mode, there’s also the Score Attack and Blind Time Attack modes, both of which offer a fun single-player option more akin to the traditional Pac-Man experience, as well as a Private mode where you can play with friends. The DLC also adds 20 custom themes based on other classic Namco games like Dig Dug, Galaga, and Baraduke. While I liked having the option to customize the game’s theme, some of the new themes were hard to look at and hindered my experience a bit. I personally preferred to stick to the default Pac-Man theme as it just fits the game so well.

If you’re just looking to play Pac-Man 99 online, then you’re not missing out on too much if you decide not to pick up the DLC, however, if you are interested in playing the single-player modes or want to play offline, then the DLC is definitely worth it. You can also buy the new DLC modes separate from the custom themes DLC if you are only interested in the added game modes and not the aesthetics. 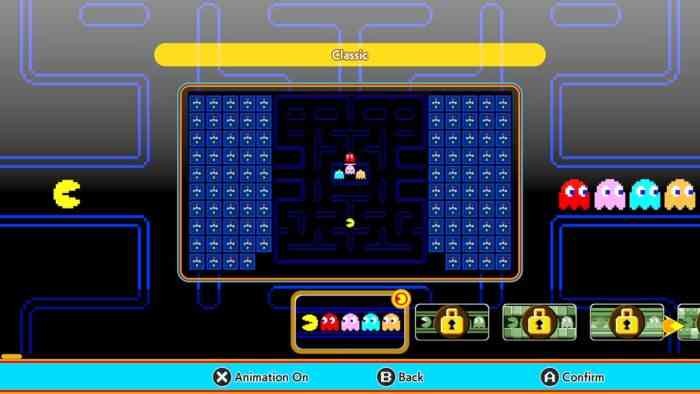 Speaking of aesthetics, while the music and graphics look and sound fantastic, there are A LOT of them. No, seriously, this game throws so many effects on your screen that it can legitimately be disorienting. There are also occasional frame drops as a result of all of the excessive visual effects, though for the most part, I found it kept a pretty solid framerate.

Overall I’m really enjoying Pac-Man 99. It’s a great pick-up and play title for when you have just a couple of minutes and are looking for something to do. The gameplay is fast-paced, competitive, and surprisingly addicting. If you have a Nintendo Switch Online subscription, there’s no reason not to give the game a shot. 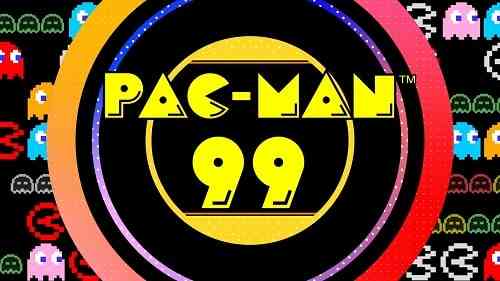