Anyone who works in customer service can attest to the fact that after a long day of …whatever kinds of customer servicing you do, you don’t much want to talk to humans anymore. This is why people invented hobbies. Be it books, movies, artwork, origami birdhouse-mache or playing Mario & Luigi: Paper Jam, everybody has their vice. Like each and every one of you reading, I burry my face in mountains of games. From a personal standpoint, I detest games that take themselves too seriously. You’ll never find me in judgment of a person that waits outside of the nearest Best Buy for the latest Call of Duty, but I need a game that can make me laugh.

In what would seem like a heinous revelation akin to a small child finding out that chocolate milk doesn’t actually come from brown cows…this is my first formal dance into the Mario & Luigi series. I’ve looked at it, I’ve watched “the youtubes” for it, and I’ve smelled the boxes, but I’ve never taken the final plunge and cracked the seal on one of these bad boys. I like Mario, and I like RPG’s, but for some reason it just never occurred to me that this series which contains both ingredients would tickle a few of my fancies. From the moment I booted up the game, to the moment I forced myself to put it down and write this, I was completely entranced. The humor is spot on, the art style is smooth and whimsical, and the combat is…well…it keeps you on your toes.

“And yet, Mario & Luigi: Paper Jam manages to bring the Mario Bros two wildest modern departures together in way that can’t help but leave you smiling.”

It’s hard to compare notes for games in a series if you haven’t played them all, but as screen shots and lets plays would have me believe, the core of Paper Jams gameplay holds faithful to its predecessors. The most important take away from any Mario & Luigi title is its unique and fully involved combat system. Straying your focus for even a second can result in some nasty damage, so turn off the latest episode of “The Housewives of El Dorado” and eyes front soldier! Each character on the field is commanded by a specific button for their every action. In previous titles, Mario would be assigned to the A button, and Luigi would be attached to B. This is still true in Paper Jam, but this time we have a new friend in Paper Mario, who can be controlled by way of the Y button. Pressing these buttons at the right time can help the plumber trio jump over incoming damage, or if timed correctly, increase damage output on attacks.

Like all good RPGs, there are a plethora of abilities to be learned and used. The newest category of these for Mario & Luigi requires the use of amiibo. Each compatible amiibo has a set of “cards” associated with it. During combat, you can tap down an amiibo to use one of these cards. Cards vary in effect from healing your status to augmenting your attacking power. Each amiibo can be used only once per combat, so choose carefully. Additional cards can be unlocked by finding blank cards in the world as you explore, then choosing an amiibo to write on it with. Cards come in varying levels of strength, so there’s a lot of wiggle room as far a strategy is concerned. 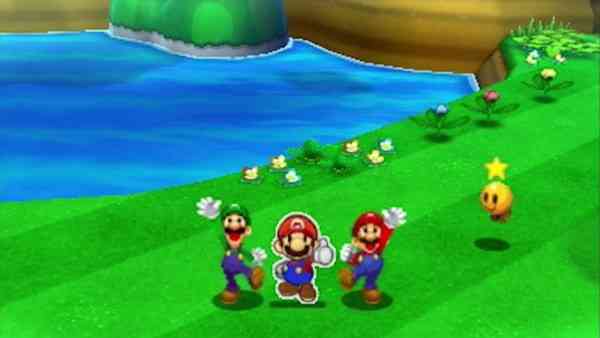 Both the main story and combat aside, there is a major aspect to this game that is both fun, and a little bit tedious. As the games story first opens up, it will become clear that hundreds of adorable little paper Toads have been thrown into a new a scary 3D world. It’s your task to find these guys and bring them home. Of course this is more than a fluffy little side quest…you are actually required to find them. Paper Jam boasts a new type of battle mode involving gigantic Paper-Craft characters that are made from your newfound Toad friends. As the game progresses, you need to have found more and more Toads to make your Paper-Craft vessel more and more powerful. The combat itself is quite fun, but its forced check point existence is a tad irksome.

Super Mario and his super brother Luigi have been so cemented into popular culture that it’s hard to play around with art style too much without things looking inherently weird. Not unlike other big names like Mickey Mouse or Ronald McDonald, you can’t just go changing things willy-nilly and expect there won’t be some back lash. And yet, Mario & Luigi: Paper Jam manages to bring the Mario Bros two wildest modern departures together in way that can’t help but leave you smiling. All of the 2D and 3D characters are blended together in the world seamlessly. The game itself is smooth and fluid, with animations that will charm the fluffy winter socks right off of your feet.

If there’s one thing I’ve said a million times before, it’s that I’m always happy to be proven wrong about a game series. Sure, I didn’t technically have it out for, or even think that the Mario & Luigi series were bad games. It’s that I didn’t think about these games at all. Mario & Luigi: Paper Jam is a delightful game with all the love and charm you’d expect from Nintendo poster boys…only now with a dash of poster boy made from poster board. Fun, laughs, and a generally good time are all to be had if you pick this up for your 3DS.

***A 3DS review copy was provided by Nintendo*** 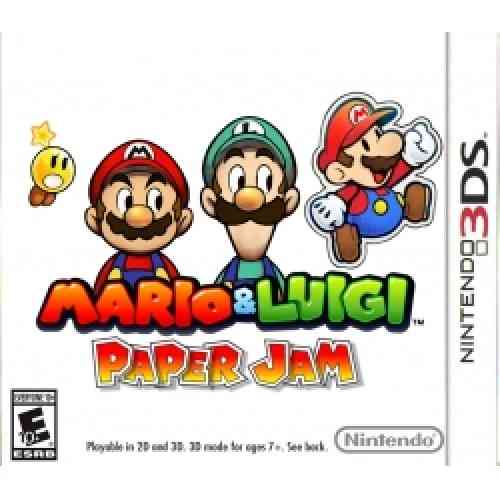 Getting to the Best Part of Fire Emblem Engage
Next Star Wars Pinball: The Force Awakens Review – Zen Doesn’t Need the Force With These Tables
Previous Dragon’s Dogma: Dark Arisen Review – Stellar RPG Makes Its Way To The West