When I decided to do a little reading into Dragon’s Dogma, I was kind of surprised to read that I had seemingly stumbled ass backwards into reviewing one of the best RPG’s in recent history. Being an RPG fan, I was baffled at how this one had slid under my radar but my anticipation grew as I booted it up. What Dragons Dogma: Dark Arisen brings to the table is the core game along any and all expansions or add-ons that came have also come out. Which, suffice it to say, makes for one hell of an open world experience that may have some drawbacks but is certainly a terrific experience.

Dragon’s Dogma doesn’t come with one of those fancy ‘remastered’ tags that we’ve been seeing so much of lately but is instead a straight port. Having come out for the PS3 and XBox 360 back in 2012. While it is, in essence, the same game as you knew back then, Capcom have decided to take full advantage of today’s graphical advancements to upgrade the visuals… if you can run it. You’re able to run the game in 60 FPS, which is incredibly impressive, but you are also able to completely unlock the framerate. It is also 4K supported, so if you have the kind of equipment to do these kinds of things (I do not), the game is going to look stunning.

“The strength of Dragon’s Dogma lies in its combat and its combatants.”

The strength of Dragon’s Dogma lies in its combat and its combatants. While Dogma trots out the same class system for your character (warrior, mage, rogue, though they subclasses do come into play later in the game), you are also gifted with a team of ‘pawns’ or supporting characters. You get one pawn that you can customize to whoever you want them to be as well as two others who journey from the magic plane they live on. These are also interchangeable with your friends in case you know others who are also delving into this wide world. Choosing the right squad of pawns may seem like a breeze, but different enemies require you to tinker with your team for maximum effectiveness. The enemies are really where the game shines. You have your enemies like wolves and goblins that you do battle with on the ground and you can utilize your wide variety of attacks, spells and weapons to put them down in effective fashion. There’s even attention to detail like injuries showing up on your enemies while you wear their health down that added to the authenticity of the combat. 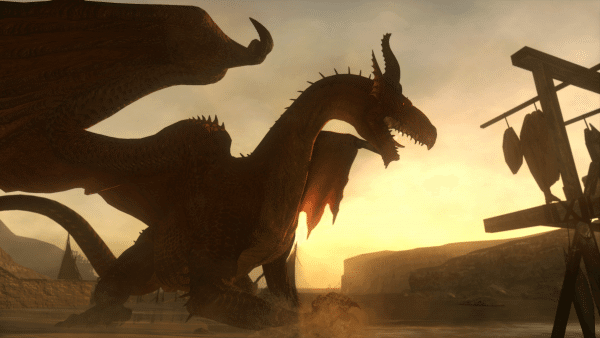 You also have much, much larger enemies that require you to change tactics and get your Shadow of the Colossus on. Climbing on your foes gives you better vantage points and the ability to hit them in vulnerable areas that you couldn’t reach before. Stamina is drained while they try to shake you off, so picking your attacks for maximum efficiency is key. The sheer scale of these fights makes it both rewarding and exhilarating to tackle these monstrous beasts as well as showing you how deep the combat system goes.

The game also doesn’t lead you by the hand through the game either. Finding missions in Gran Soren is easy enough, but there’s a lot of sidequests that can be found by interacting with villagers or listening to conversations. But Dogma doesn’t lead you to any of these, opting to let you discover it for yourself. It also doesn’t give you any information about the difficulty of the mission, something I didn’t realize I had been spoiled for by The Witcher 3. Even in Fallout 4, the missions tend to increase in difficulty with your level, but Dogma simply lets you figure out for yourself if you’re strong enough for such a mission. There were many, many times that I was not. 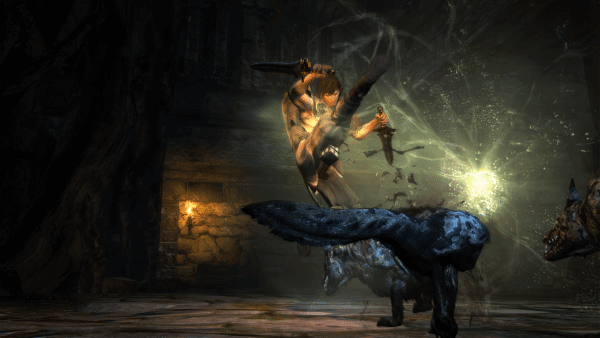 Where Dragon’s Dogma really stumbles is in it’s almost comically bad storyline. I mean, I don’t know if there was any effort at all put into coming up with plot for this one. It’s pretty much a copy and pasted plot summary and they added their own descriptors to it. There was also a few niggling problems like a somewhat bland character create with one of the worst user interfaces I’ve had to try to get through. There was also more of a personal perception than a problem with the game that stuck out to me. Based on its ‘Western style, JRPG’ description, I was expecting something more akin to Fallout or the aforementioned Witcher 3 with JRPG elements to it. Dragon’s Dogma is not that, at all. The game is very combat oriented and mostly about monster fights and doesn’t rely on the exploration that you would find from a Fallout style game. Which isn’t a bad thing but I had just gone in to the game with different expectations.

Overall, Capcom has done a great service to this game with its PC port. The game will run just fine on low settings, though you will certainly know you’re playing a last-gen game, but has the ability to run at an uncapped framerate and at 4K. It’s deep combat and customization systems are outstanding and will certainly keep you in the game for a long time. These systems are so deep in fact, that you can actually overlook that is has a dreadfully shallow storyline. For a game that’s already nearly 4 years old and is a product of the previous generation of consoles, Dragon’s Dogma: Dark Arisen is certainly standing the test of time. Not perfect, but still a shining example of a stellar RPG and one that fans of the genre should readily seek out. 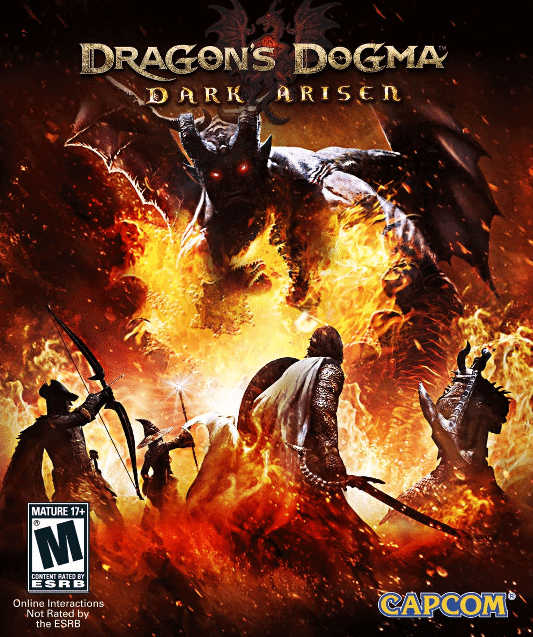