Fantasy games have a host of different factions, races, and stories contained within them. Sure, everyone wants to be the chosen hero, but what about the villains? Okay, so that story’s also been told a time or two. How about the evil NPCs? Looterkings is a game that asks what life is like as a level one villain. Turns out it’s brutal, unfair and short. Sometimes it’s also fun!

Looterkings tells the story of a goblin horde looking to raid the coffers of the Elven Queen. You play as one member of this horde, looking to get rich and also die trying. There isn’t a lot of meat to this story, though most of the enemies you face are elven in origin. The levels you climb through also change to reflect your progress towards the Queen’s treasure vault. Aside from these minor details, the story you encounter during your climb is minimal. But what need is there for a strong narrative in a game like this, anyway? We’re here for that tasty loot, after all. Goblins have positioned themselves in the pop culture zeitgeist as greedy little creatures with a singular fixation on the acquisition of wealth. Or the flesh of heroes and townsfolk. The point is, the narrative is already pre-baked into this character archetype. We already know what we need to about their motivations and their overall goals.

“For the first few runs through the game, you’re unable to really buy anything.”

However, here’s the thing about that tasty loot; even if you happen upon a few hundred gold coins in a run, it’s pretty useless without something to spend it on. The shop is basically empty when you start, only filling up as you gain levels. Every new level means another item for sale. Unfortunately, those levels come very slowly. This means that for the first few runs through the game, you’re unable to really buy anything. Your money doesn’t carry over from run to run, either. You’ve just got fistfuls of coin rattling around in your coffers with nowhere to go, ready to spill out uselessly on the ground when you’re inevitably murdered. Eventually, you get the levels, during which time you get better at the game, giving you more opportunities to get loot. All of this is a slowly-turning wheel which leads to the acquisition of better equipment. All of that grueling work then translates to progress up the tower. Of course, this whole endeavor is pretty much impossible if you don’t get good at taking down the dungeon’s formidable foes. 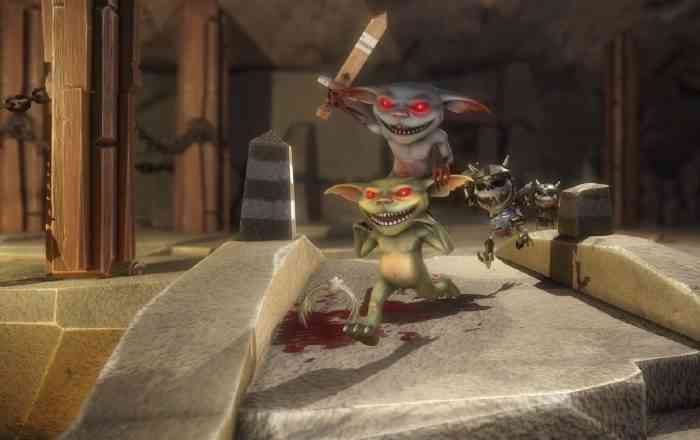 Enemies in this game are capable of taking a lot of hits. Like, a lot. Looterkings is a game designed for four players, you see. So if there are any fewer people than that, the monsters don’t scale down in power or health. A boss has exactly as much health whether it’s just you or you’ve got three other goblins with you. So in order to survive, you go ranged instead of melee. You do the sacred dance known as circle strafe, you grab fistfuls of mushrooms to recover your health and with a little luck, you win the day. Simple right? Well, you’ve got no aiming reticle to line up, your shots are sort of slow and they only do a tiny bit more damage than the wooden sword. Plus the controls are a bit on the sluggish side. Running from enemies feels like tumbling through a river of syrup. Also, you can’t run for more than a second at a time. You’re not doomed, exactly. But it’s going to be a long, grueling journey to get to an advantageous position at the start of every run. Eventually, you unlock enough gear and weapons that the first few levels aren’t so tough. But without some stalwart comrades to keep you afloat, you might never make it to the Elven Queen.

There are systems in place to help embody that goblin spirit by letting you rob, stun and abuse your teammates as you see fit. And it’s fun! You can smack the loot out of your friends, ride on top of them like horses and feed them poisonous mushrooms. A funny thing happens, though. You quickly realize that all this delightful infighting is incredibly counterproductive. Freshly-robbed goblins can’t afford gear, which means you’re spending way too much time resurrecting them in battle. Plus, it’s already hard enough to take out your enemies with good gear, let alone the basic stuff you’re stuck with if you’ve got no gold. If you screw over your friends, they become three huge bales of dead weight to drag around, which simply isn’t that much fun. The horsing around aspect of this game needs to be balanced out with a steady progression towards better skills and gear, or your forward momentum will trickle away.

“It’s going to be a long, grueling journey to get to an advantageous position at the start of every run.”

This is a game that requires some careful balancing on your part. The trouble is, this isn’t immediately obvious. Only after some costly trial and error do you figure out where to invest your time and energy. If your team works together, you can easily take on some particularly tough opponents. Assuming the stages that are generated give you appropriate monsters to fight, you’re in business. Occasionally your first encounter is a shielded squad of fire elementals. Tough luck, right? Well, you just dust off and try again. This is where those teammates come in. If you’ve got a fun group to play with, this game is a blast. But without that element of camaraderie, climbing your way through the Elven Queen’s tower is a brutal slog. Looterkings is a game that can’t sustain itself without multiplayer. Playing this game on your own is a punishment. With some friends, however, it’s pretty fun. 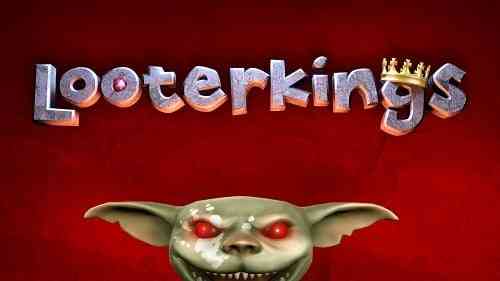